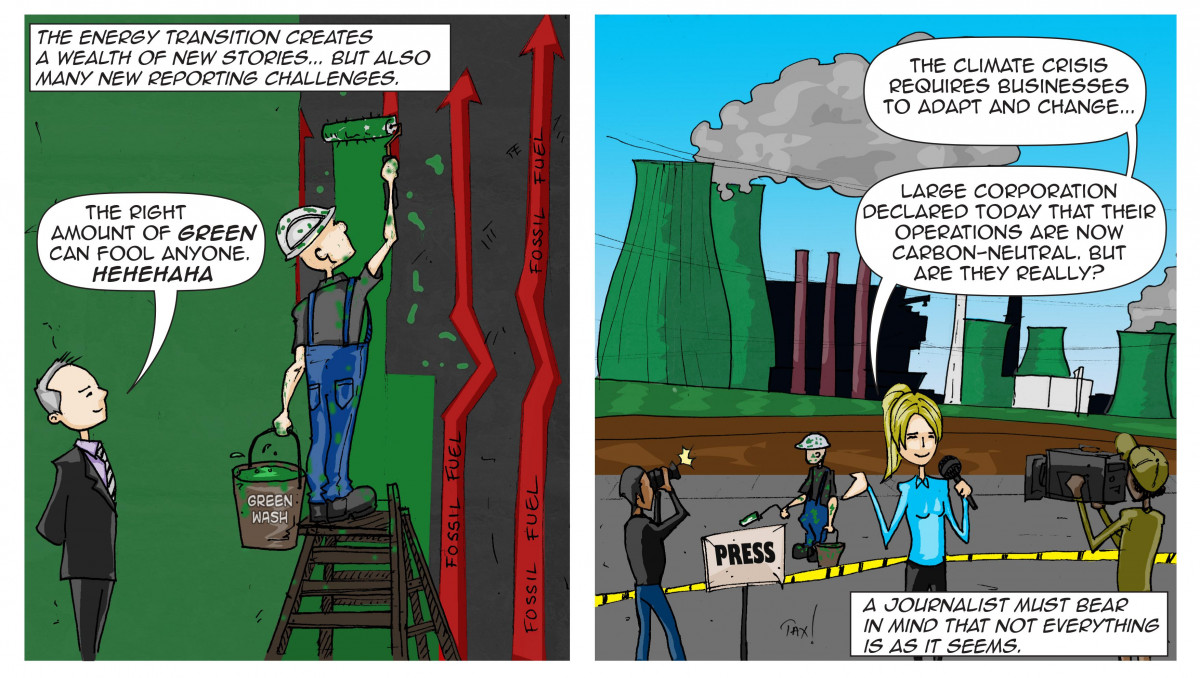 Illustration: Mwelwa Musonko
While eco-friendly innovations and products are tempting to report on, journalists and editors at CLEW's Global Energy Transition Journalism conference earlier this year agreed that a critical eye is needed to make a distinction between true innovation and green marketing stunts. Comic artist and illustrator Mwelwa Musonko captured the topic in this illustration. This is the seventh part of our current weekly series of blog posts about the broader themes and discussions from the #GETJO19 conference and beyond.

'Greenwashing' was often brought up at the Global Energy Transition Journalism conference this past April. It was also addressed in a recent guest piece by The Beam’s Anne-Sophie Garrigou – as part of our weekly post-GETJO19 series that takes debates and discussions from the conference further. Many journalists, editors, and media experts who attended GETJO19 believed that greenwashing, or painting a product or innovation to be 'green' and environmentally friendly or low on emissions when it is actually unsustainable, might become more common with the growing consumer demand for greener and more sustainable products – not to mention tougher laws from governments.

One of the most notorious cases of greenwashing was Volkswagen's "dieselgate" scandal, in which the German automobile manufacturer rigged 11 million diesel cars to meet emissions standards. Volkswagen, however, was not alone and with time other big names like Mercedes-Benz and BMW were later implicated in dieselgate.

In a recent interview with the CLEW network blog, former New York Times business reporter and journalism professor at New York University, Leslie Wayne, said: "It is important for journalists to be as sceptical of green energy pitches and promises as they would from fossil fuel companies."

Founder of Foresight Comics, Mwelwa Musonko, created this image inspired by the GETJO conference, to capture the makings of a greenwashing campaign. To see more of Mwelwa's work, visit: foresightcomics.com

In 2018, Mwelwa joined CLEW on the Horst-Köhler-Journalism-Grant of the International Journalism Programme (IJP). Look out for more of his work in upcoming CLEW publications, and here.