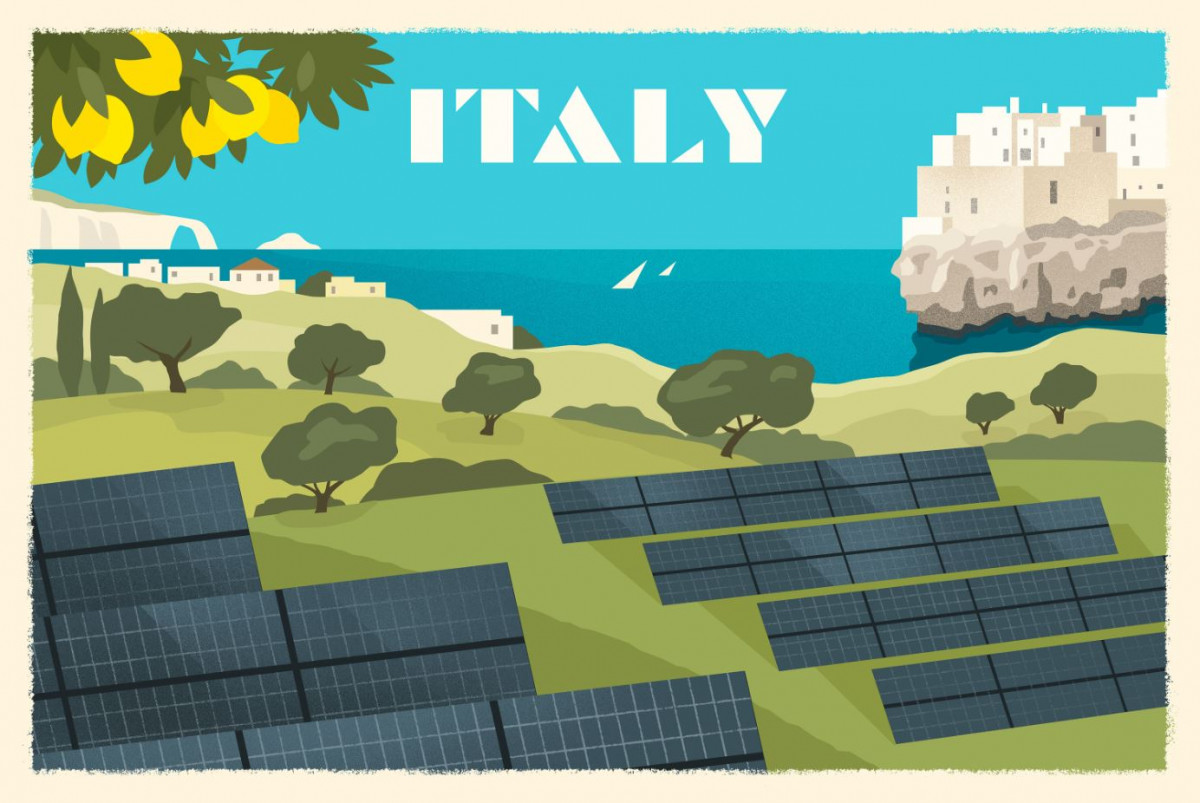 Illustration: Michael Crampton / China Dialogue
Italian experts no longer doubt China's determination to act on climate change. This confidence stems from China's recent pledge to reach carbon neutrality before 2060, and the reaffirmation of its commitment to the Paris Agreement targets at a summit for EU and Chinese leaders in September. However, certainty that China will fully exploit the commercial opportunities offered by the transition to a sustainable economy has raised concerns that its economic might will put Italy at a disadvantage.

This report is the third in a "Postcard from Europe" series about the cooperation between China and Europe in the fight against climate change. Contributors from various EU member states describe how this relationship is seen in their home country, and what impact it already has. The project is a collaboration between Clean Energy Wire and China Dialogue, a non-profit organisation dedicated to promoting a common understanding of China's environmental challenges.

“China has understood that the future of investments lies in the green economy,” says Raimondo Orsini, director of Italy’s Sustainable Development Foundation, which supports businesses and organisations to become more sustainable.

Chinese foreign direct investment into Italy increased from 573 million euros in 2015 to 4.9 billion in 2018, according to the Italian Parliamentary Committee for the Security of the Republic (Copasir). The report notes that a large concentration of Chinese investment has been made in companies perceived to have high strategic value, particularly in the energy and grid sectors.

For example, Italian energy and gas infrastructure operators Snam and China’s State Grid International Development (SGID), a subsidiary of China’s State Grid Corporation, signed an agreement that could pave the way for using Italian biogas and biomethane technologies to generate electricity in rural China. The partners also want to evaluate a possible collaboration in the maintenance and optimisation of transport networks and natural gas storage sites in two other countries where SGID operates – Australia and Portugal. Even before these agreements, SGID and Snam were financially linked. In 2014, SDIG spent around 2 billion euros to acquire 35% of holding company CDP Reti with a 30% stake in Snam and 29.9% in Terna, the owner of Italy’s national grid.

But China’s heavy involvement in Italy’s green energy sector has raised fears of a growing dependence on Chinese technologies in both Italy and the EU. In a controversial decision, Italy signed on to the Belt and Road Initiative in March 2019. After having been in place for almost five years, the EU anti-dumping and anti-subsidy measures on solar panels from China have expired. “Some people are [still] fanning the flames over an alleged invasion of Chinese products on the market, but this is due more to our inability to play a productive role than to Chinese demerits”, says Mariagrazia Midulla, head of climate and energy at WWF Italy. “We should avoid placing stops on environmental assets that can improve decarbonisation, so as to help create a system that, instead of being set up on pure competition, can be set up on cooperation.”

Some doubts also remain on border tax measures and a carbon tax, which have often been proposed in recent years. “Only a year ago China openly criticised the EU proposal for a carbon border tax. A credible adoption of the carbon neutral pledge will exempt China from it, leaving only the US as the major EU trading partner affected by the measure”, says Massimo Tavoni, director of RFF-CMCC European Institute on Economics and the Environment in Milan.

However, China is not only interested in unlocking the Italian market for its products, but also has an eye on using Italian products, says the Sustainable Development Foundation’s Orsini. “We know that China is still interested in our technologies,” Orsini says.

“China’s [climate] pledge might indirectly influence the EU [low-carbon] transformation in several ways. Technological change will accelerate, especially for those technologies, such as battery storage and electrification, where China is expected to invest the most”, explains Tavoni. “This will facilitate the economics of the transition in Europe too, but might also make Europe more dependent on Chinese raw materials and technologies.”

But the question remains whether cooperation between China and the EU can boost climate action globally. “This is much harder to predict. China and the EU alone are probably not enough to catalyse action at a global scale. Other key emitting countries would need to be on board”, says Tavoni. He also cautions that “the EU’s, including Italian, climate goals are clear, but the exact way these will be attained remains unclear.”