Off to shale boom country, with more than a little help 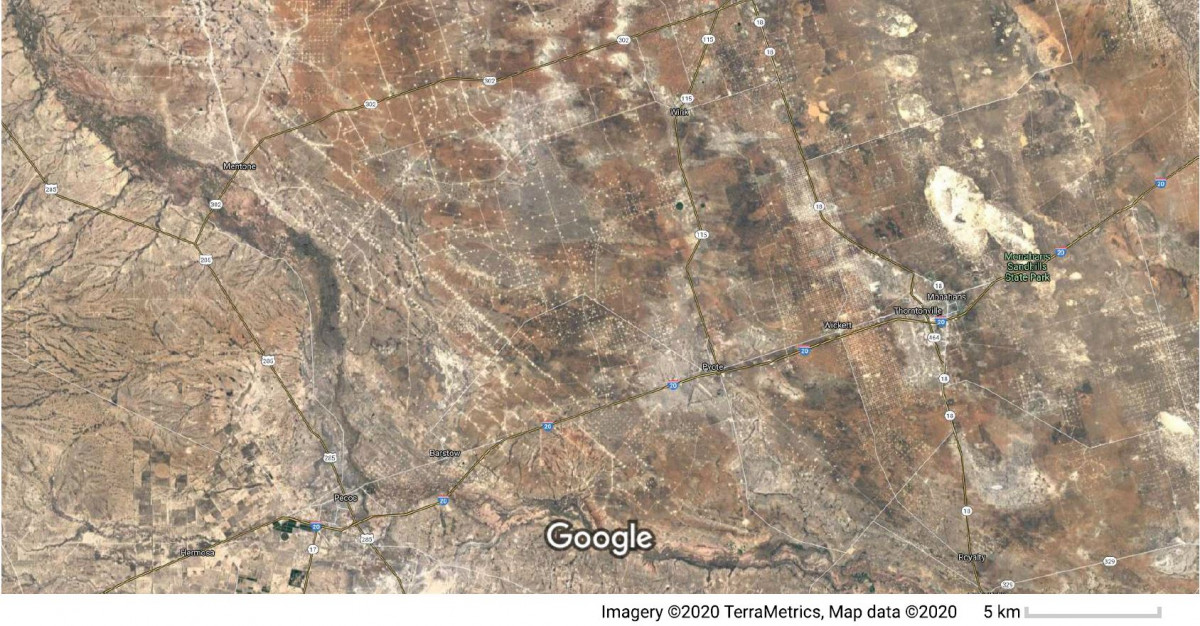 Oil and gas drilling sites near Pecos, Texas. Source: Google, Imagery ©2020 TerraMetrics, Map data ©2020.
The United States administration is promising to bring freedom to Europe with its exports of liquefied natural gas (LNG), while the industry touts it as a tool reduce greenhouse gas emissions and reach the EU’s ever stricter climate targets. However, studies showing that methane emissions from the LNG value chain are higher than previously thought and the negative environmental and social effects of the recent US export boom have many doubting that narrative. With the support of a Kellen Fellowship by the American Council on Germany, Clean Energy Wire’s staff correspondent Julian Wettengel will travel to the heartland of shale oil and gas to get the US view on the industry and its future. In this blog post, he talks about how he can count on the help of many colleagues from the CLEW network and beyond to make the trip a success.

“Germany is totally controlled by Russia because they will be getting 60 to 70 percent of their energy from Russia and a new pipeline.”

This statement by US President Trump at the 2018 NATO summit in Brussels is what got the ball rolling for me. He might have had the numbers wrong when he lashed out at Germany and its planned gas pipeline to Russia, Nord Stream 2. But he clearly hit a nerve, as he so often does.

The economy ministry in Berlin was quick to send out a press statement highlighting Germany’s “diversified supply structure” for oil and gas, and Clean Energy Wire got all-time record site visits that day thanks to our article and the factsheet on German dependence on imported fossil fuels. We kept following the story over the next months.

The business man he is, Trump accompanied his criticism with the offer of US liquefied natural gas (LNG) shipments as a way to replace Russia’s pipeline gas and thus increase European energy security. Months later, the administration started using the phrase “freedom gas” (a term apparently coined by journalist colleague Frédéric Simon from EurActiv).

German economy minister Altmaier announced he would speed up the decision on the country’s first LNG import terminal in a “gesture to our American friends” and later organised a full-blown investor conference in Berlin to bring together the gas industry from both countries and help smooth diplomatic tensions.

Now, one year after that meeting, there is still no final investment decision on a German import terminal, but the government time after time highlights the importance of a natural gas as a “transition fuel” as the Energiewende country replaces nuclear and coal with renewables.

At CLEW, we’ve written plenty about German policy and plans – but what about the view from the other side of the Atlantic?

What is the story behind that promise of billions of cubic metres of exported freedom?

How does the shale boom, which made the United States become a net natural gas exporter in 2017 for the first time in almost 60 years, affect the lives of people in the producing regions? What potential do US exporters see in the European market? And what about flaring and methane emissions along the LNG value chain? Can the gas really be the right solution for a European Union that plans to increase climate targets and become greenhouse gas neutral by 2050?

To find answers to these questions I will travel to the US to visit fracking sites in West Texas, talk to environmental activists near the Mexican Border, hear what the gas industry has to say at the major energy conference CERAWeek in Houston and collect the views of experts in the capital, Washington, D.C.

With the support of a Kellen Fellowship by the American Council on Germany, I will embark on a four-week research trip and return with a treasure trove of stories, memories and new contacts.

Any journalist who has ever had the privilege to do something similar will know: organising such a trip from thousands of miles away is difficult, but knowing where you want to go and who you want to meet beforehand can be crucial to avoid returning empty-handed.

I have the good fortune of working at Clean Energy Wire, where we put an emphasis on cross-border cooperation and connecting journalists covering the energy transition story around the world in our CLEW Network. In a way, this trip allows me to practice what we preach.

I have been blown away by the readiness to help by colleagues from our network and beyond these past few weeks. An American journalist spending an hour on the phone answering my many questions without having ever met or heard of me before, a reporter from Germany who has done similar research in years past and shared valuable contacts, a US colleague who has been stationed in Texas and was able to connect me with local journalists, another who gave me general advice on working in the US – I can’t thank you all enough!

The itinerary of my adventure is far from complete days before it is supposed to start – some things will have to come together once I’m in the field, I guess. But having had all that support, I can kick this thing off with a little less worry on my mind.