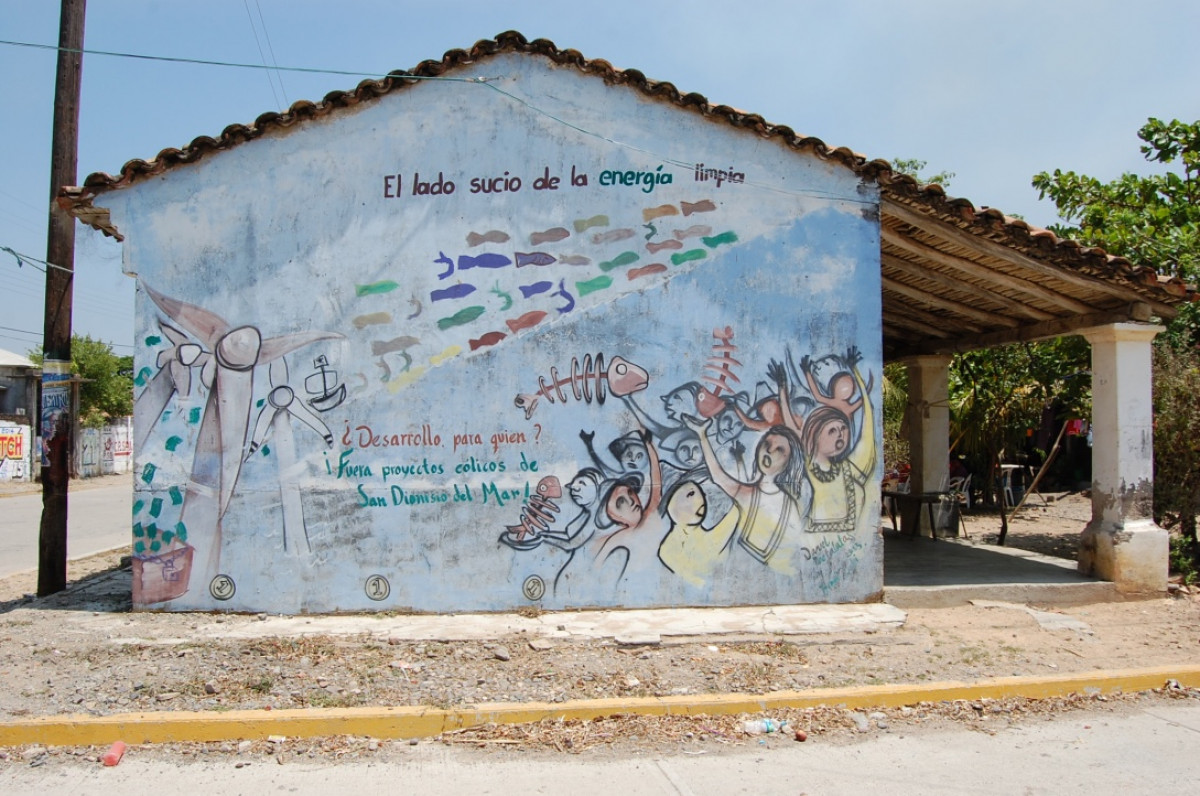 "The dirty side of clean energy” found on a wall in San Dionisio del Mar, Oaxaca, in the South of Mexico. Photo: Juan Mayorga
Juan Mayorga is a freelance journalist based in Mexico City and has published in Expansión, Animal Político and Kaja Negra. Here Juan speaks about the top-down dynamic of the energy transition in Mexico, which often puts poor communities at disadvantage, which, he says, prevents a democratic energy transition. Juan believes journalists have failed to cover social inequality in the energy transition and he struggles, as a freelancer, to get this angle conveyed. This is the eighth in our weekly series of blog posts on the themes from the Global Energy Transition Journalism conference 2019 (#GETJO19) and beyond.

A number of presentations during the #GETJO19 conference in April touched, directly or indirectly, upon the social implications of the global energy transition. However, I found the most striking revelations not in the presentations, but in chats with fellow journalists during coffee breaks and meal times.

In some of these closer encounters, colleagues from India and Latin America agreed with me that the most valuable social lesson from the German Energiewende is its bottom-up approach, which has led to buy-in from ordinary people. This was enabled by the feed-in tariffs and other aspects of the policy design, resulting in a massive appropriation by common citizens and, ultimately, a considerable level of energy democracy.

Most importantly, we discussed the lack of such a socially attractive process in our countries, mostly in the Global South, in countries represented by colleagues who attended the conference: India, Argentina, Bolivia or Cuba.

From my experience covering the energy transition in Mexico, I can offer notes on a top-down process in which the state allows only big, trans-national corporations (Siemens/Gamesa, Acciona/Iberdrola and Vestas hold over 90 percent of the national installed capacity in the country) to take part in the business, triggering an often violent social backlash from impoverished social groups – often indigenous populations – who see how an industry worth millions is being developed in their backyards, while they receive only a tiny fraction of the financial benefits for the lease of their lands.

This describes the situation in the southern part of the Isthmus of Tehuantepec, in the state of Oaxaca – a prime location between two oceans with a funneling effect formed by mountain ranges that attract winds considered optimal for wind power. The region has an overall wind potential of 40,000 MW, and several zones reach wind speeds of over 800 W/m2.

"The most valuable social lesson from the German Energiewende is its bottom-up approach, which has led to buy-in from ordinary people"

Besides some impressive numbers in installed capacity and low production prices, the energy transition in Mexico in this region – which is responsible for almost half of the country’s wind production – has succeeded in consolidating an unfortunate social narrative that demonizes wind energy.

Much of this narrative was fueled by the case in San Dionisio del Mar, where violence erupted in 2012 after enraged residents learned of a money transfer to the local major from the group in charge of developing a large-scale wind park called Mareña Renovables. In the months that followed, even women and teenagers defended barricades to stop the police forces sent to clear the area for the construction of the wind park.

I can’t overemphasize the negative impact of this event on citizens’ perception of renewable energies, as opposed to places where renewables are generally portrayed as a means for strengthening local economies and communities.

The violent escalation of this confrontation constitutes a political gridlock for further developing the sector. In other words, we have – at least from a semantic point of view— killed the goose that lays the golden eggs.

Media has failed to shed light on the social conflict. Few stories have aired the bitter claims of local groups, and even fewer have gone deeper into analysing the perceived injustice of the process.

In many cases, local groups even accuse the media of siding with big corporate interests, while turning a blind eye to the demands of activists and grassroots organisations that have been active for years in demanding a fair, inclusive redesign of the energy transition.

This clash was visible this past June, after the newly appointed environment minister, Victor Toledo, made the claim that wind turbines from big wind parks “catch the air from the indigenous territories”. A number of mainstream reports focused on the obvious impossibility of physically catching air, rather than how the statement reflects real cases of social conflict sparked by an ill-conducted expansion of the wind industry in socially-sensitive contexts. Afterwards, several media reports were contested on social media (Twitter) by users familiar with the ongoing conflict in the Isthmus of Tehuantepec.

"Impoverished social groups in Mexico – often indigenous populations – see how an industry worth millions is being developed in their backyards, while they receive only a tiny fraction of the financial benefits"

Personally, I have struggled for almost two years to publish a story about a community wind park proposed by farmers in the indigenous town of Ixtepec, which has never taken off because of a lack of state support.

The case is highly relevant, as it illustrates the perverse policy and administrative framework in which renewable energies operate in Mexico. As opposed to Germany, it is incredibly difficult for lay citizens to access the market, while the biggest players receive the bulk of the incentives.

If not rejected for “lack of space” in print media, the story is indefinitely postponed, subjected to the daily agenda or simply ignored by editors who don’t understand its implications for the broader energy landscape. A situation that, I believe, could be solved by greater professionalisation in the media sector. Finally, after my fourth attempt, the story is now scheduled for publication in June. Fingers crossed.

Currently, the new federal administration in Mexico has suspended auctions for new installed capacity. This has triggered accusations from the opposition that the government is holding back renewables development – which seems like a good opportunity to put the fairness of the whole energy transition on the table.

Still, there are few signs that local journalists grasp the importance of this issue.

Juan Mayorga is a member of the CLEW Journalism Network which brings together international reporters covering the energy transition. Find out more about the network here or join here.