Factsheet
Across Germany, citizens have taken a direct stake in the transition to a cleaner energy supply through ownership of renewable energy installations. This factsheet gives an overview of the different ways in which citizens invest in the renewables sector, as well as the scale of their participation.

In 2016, a total of 15.1 billion euros was invested in renewable energy facilities in Germany. Germans first set up renewable energy installations, such as photovoltaic (PV) panels and wind turbines in the 1990s. In 2000, the Renewable Energy Act (EEG) was passed, guaranteeing fixed feed-in tariffs for anyone generating renewable power for a 20-year period. This further encouraged households to install PV panels on their roofs, either feeding the electricity they produced into the grid, or consuming it themselves.

Citizens have also banded together to invest in larger scale installations that would be too expensive for single individuals alone. For more than two decades, various legal forms of ownership have allowed citizens to own solar parks and wind turbines. The most common forms are energy cooperatives (Energiegenossenschaften) and the hybrid “GmbH & Co. KG” (limited liability company & limited partnership).

Citizens’ energy is often organised by specialised project developers. Many of these projects are formed on a local level, for example, local citizens investing their savings in a nearby wind farm. But some are also regional – or even interregional – operations. These citizen-owned projects may also include companies or municipalities among their members, but they are separate from municipal utilities.

German citizens also participate in renewable ownership through interregional investments and minority shareholdings, cooperating with municipalities, public energy providers or public credit institutions. The researchers included these types of investment when referring to citizens’ energy in the broader sense.

In a 2018 update of the study, trend:research published ownership information for 2016, the latest  available. That year, Germany’s total installed renewable energy capacity (without pumped storage) amounted to 100.3 gigawatts (GW), according to the data. 31.5 percent of this was owned by private individuals and another 10.5 percent by farmers, bringing citizens’ energy ownership in the narrower sense to 42 percent, down from 46 percent in 2012. 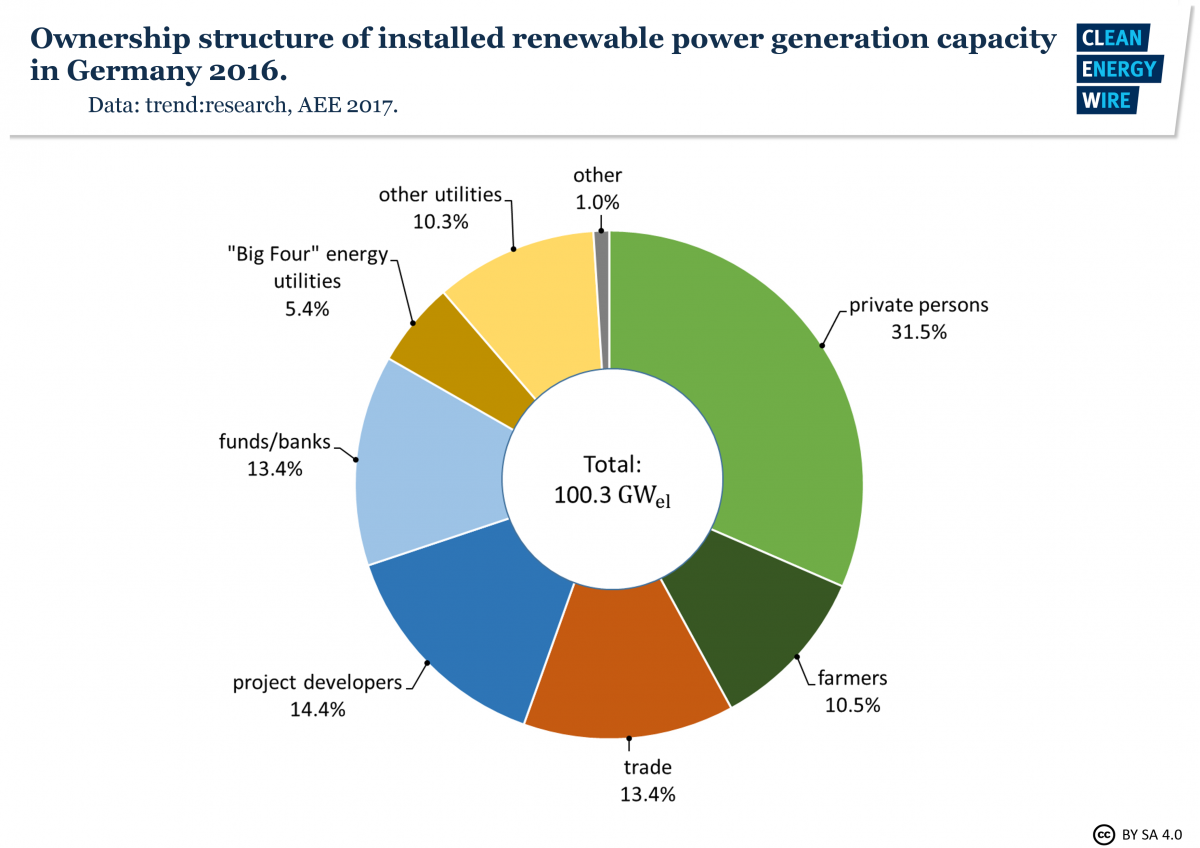 In a press release, trend:research points out that much of renewables expansion in recent years was driven by citizens’ onshore and offshore wind power projects. However, as many of those projects successful in the last auctions could not be seen as “pure citizens’ energy projects”, overall ownership shares will likely continue to shift in the future, writes trend:research.

Critics had said that the switch to auctions for renewables support with the 2016 reform of the EEG would favour corporate projects and spell the end of citizens’ energy, due to regulatory hurdles. Yet the reform also introduced a definition of citizens’ energy companies to provide these with special privileges in auctions for renewables support, which helped citizen energy cooperatives to turn out as the "big winners" in the first auctions. In June 2018, the federal parliament decided to suspend these privileges until 2020, after criticism of a “flawed legal definition of the new actor group ‘citizen energy’”. [For background, read the CLEW factsheet High hopes and concerns over onshore wind power auctions]

The largest share of citizen ownership in the narrower sense is in the biogas sector, where farmers owned almost three quarters of installations in 2016. The share in solar PV is also high, where private individuals own 33 percent of installed systems, and farmers 16 percent. 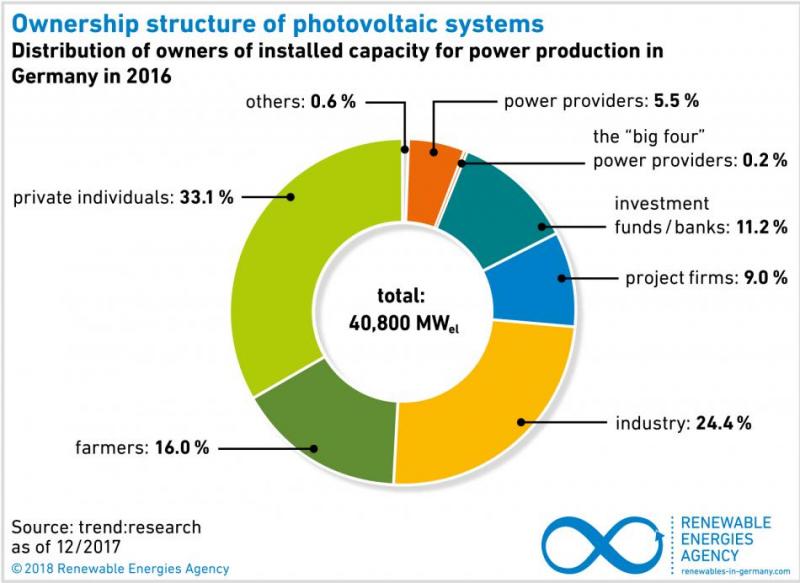 The energy cooperative is the most popular legal means of organising citizens’ energy and makes up more than half of Germany’s more than 1,700 projects. Each member of a cooperative has one vote. Projects can be carried out democratically with many equal partners. The German version differs from cooperatives in the American sense.

There were 1,024 registered energy co-ops across Germany in 2016, according to the Leuphana researchers. Between 2008 and 2016, 967 new cooperatives were founded. Around 180,000 people participate in energy co-ops. As well as cooperatives that generate power from wind and solar installations, these figures include cooperative energy companies, local heating networks and bioenergy villages. Cooperatives in Germany have as few as three, or as many as 3,125 members, the Federal Office for Energy Cooperatives reports.

The decline was due to a sinking number of new solar installations and an increase in new wind parks, where limited partnerships with a limited liability company as general partner (GmbH & Co. KG), became the favoured business structure, write the researchers. 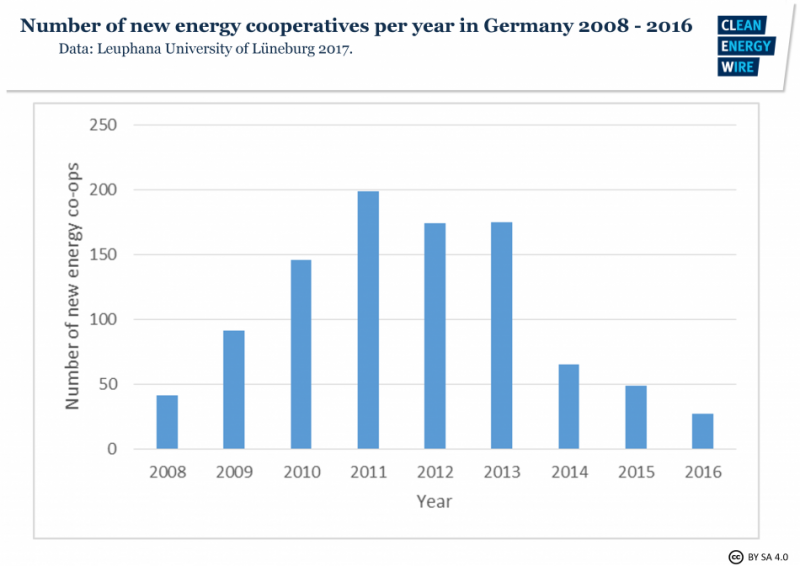 More than 90 percent of energy co-op members are private individuals. The rest are companies, municipalities or farmers. 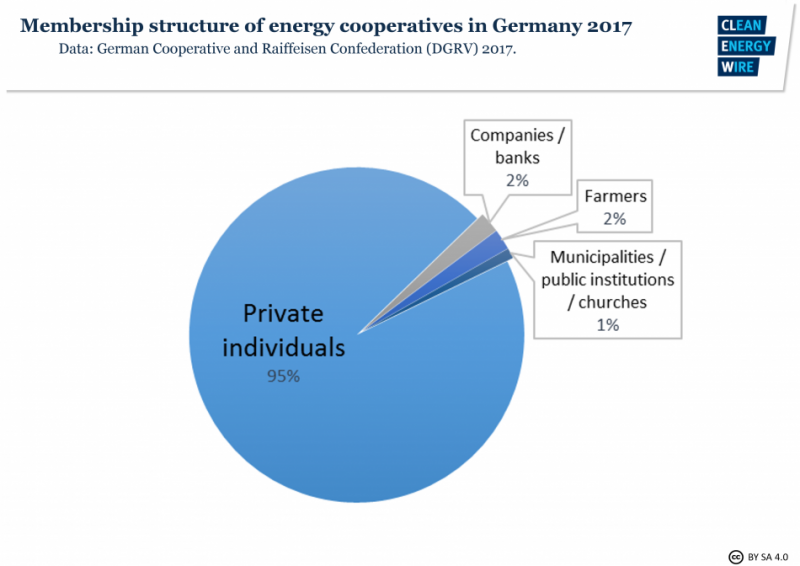 Financing and investment in energy cooperatives

At the end of 2017, the average investment volume of energy co-ops was 3.5 million euros, according to a survey by the German Cooperative and Raiffeisen Confederation (DGRV). Average shareholder equity amounted to about 1.4 million euros. The 855 renewable energy co-ops, which were founded between 2006 and 2017 and are registered with the DGRV, invested a total of 2.5 billion euros.

Energy co-ops in Germany have an average annual turnover of 359,583 euros. The average dividend per year is 3.43 percent, but many cooperatives do not pay dividends in the first years after their creation. Still, compared to common saving accounts, which currently yield less than one percent interest, participating in renewable energy cooperatives was worthwhile for households.

Energy co-ops enable people with a relatively small budget to participate in the energy transition. The average minimum investment is 595 euros, but it can be as low as 10 euros. In 2017, the average energy co-op member invested 3,729 euros.

As mentioned above, “citizens’ energy” in the broader sense also includes cooperation with public institutions such as municipalities, public energy providers and financial institutions. Although a few municipalities are members of energy cooperatives, this is not the norm. However, even if they do not participate financially, local authorities may provide space for renewable installations owned by energy co-ops – usually either land on the outskirts of a town or city, or the rooftops of public buildings (schools, town halls, etc.).

Energy cooperatives frequently work with public credit institutions, such as Germany’s savings banks (Sparkassen) or cooperative banks (Genossenschaftsbanken). These financial institutions don’t just provide energy co-ops with loans (the money for these loans usually comes from Germany’s state development banks, such as the KfW, and are passed on by the Sparkassen and Genossenschaftsbanken). They may also help to attract new members by offering share certificates to their customers, participate in marketing, or give advice on infrastructure, building or insuring a renewable installation.

The youngest of these, Econeers, successfully raised more than 1.2 million euros in its first year of existence, reporting an average investment of 1,252 euros by 1,000 individuals. In general, crowdfunding platforms accept investments starting from as little as 25 euros.