Factsheet
National media coverage of the German Energiewende mainly chronicles government activities and energy policy debates, such as reforming the Renewable Energy Act, the upcoming Climate Action Plan 2050, or the fate of big utilities. But it's local administrators, cities, utilities, associations, small businesses and regular citizens who are actually moving Germany towards a low-carbon, nuclear-free economy. These colourful, real-people stories are often absent from the national headlines and CLEW's daily News Digest. In this Factsheet, you'll find a selection of on-the-ground stories that shed light on some of the local challenges, successes and unexpected side-effects of the Energiewende.

“Where should the birds go after the Energiewende?”

The local Neuss-Grevenbroicher newspaper reports a more curious twist to the connection between environmental protection and the Energiewende. Young Peregrines in North Rhine-Westphalia have been known to build their nests in open coal mines on RWE’s stackers – large machines used to pile bulk material in the mines - reports Neuss-Grevenbroicher Zeitung. “Our employees can continue to dig as usual, that doesn’t disturb the birds,” said Gregor Eßer, RWE Power’s commissioner for nature conservation. The employees have grown close to the Peregrines and observe them via a security camera. However, with a possible coal phase-out as part of the transition towards renewables, the birds would have to look for a new place to breed, writes the newspaper.

CLEW context: Environmental protection is closely linked to Germany's Energiewende. In the case of wind power, this can lead to environmentalists opposing environmentalists - while opponents claim the turbines ruin the landscape and kill birds, advocates emphasize the need for clean energy. 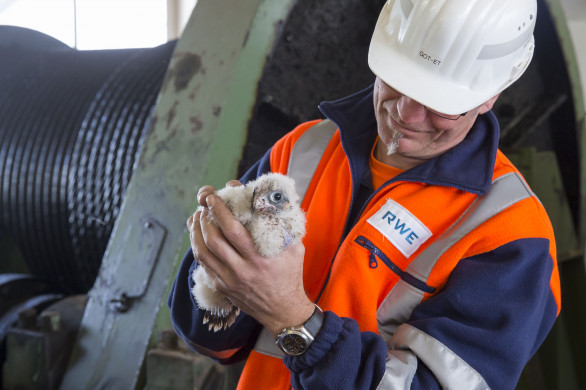 Munich has decided not to wait for the German government to debate the benefits of a buyer’s premium for new electric cars. The city started handing out bonuses for buyers of commercially used e-cars at the beginning of April, writes the Donaukurier.  It will invest 22.2 million euros over the next two years in Germany’s “largest community direct funding programme” for electric mobility, urging businesses to opt for purely battery-powered, instead of conventional, vehicles. Each new car will be funded with a maximum of 4,000 euros. Those who trade in a conventional vehicle will get 1,000 euros and will receive an additional 500 euros if the new vehicle is charged with renewables. The city hopes to reduce its dependency on fossil fuels and to lower emissions and noise pollution. The programme had a promising start with more than 90 applications in the first few days.

CLEW context: The federal government long debated plans for a 4,000-euro buyer's premium for new electric cars to boost e-mobility, to be introduced in the coming weeks. Cities like Munich put their own programmes into action.

Read the article in Donaukurier in German here.

Find all details about the programme on Munich’s homepage in German here.

The district of Pinneberg near Hamburg has 19 charging stations for electric cars. So far, these have failed to attract many customers, despite the fact that they are free-of-charge, writes the Hamburger Abendblatt. One of the stations was used only twelve times in its four-year existence. “I photographed all of the cars,” said Ingo Worm, manager of ‘Wir hefen uns selbst’ (‘We help ourselves’), the foundation that set up the terminal. Only 119 of 220,000 cars registered in the district are electric cars. Dealers in the region say electric cars remain a niche product because of the limited driving range and high purchase price.

CLEW context: The federal government plans a 4,000-euro buyer's premium for new electric cars to boost e-mobility. The official goal is to have one million e-cars on German roads by 2020. At the beginning of 2016, the Federal Motor Transport Authority (KBA) listed only 25,502 electric cars.

“The town of Lingen after the nuclear phase-out”

After the local nuclear power plant is shut down in 2022, the western German town of Lingen is pinning hopes for its economy on a natural gas power plant owned by RWE and an oil refinery belonging to BP, reports Osnabrücker Zeitung. The district administrator of Lingen, Reinhard Winter, foresees “distinct economic consequences” from the nationwide nuclear phase-out. Near the power plant site – an area that the administration calls ‘Energy Valley’ – about 7,000 jobs depend on the energy sector. The district government commissioned a study on its regional economic significance to jumpstart a discussion about what will happen after the nuclear plant’s shut-down. Results are expected within the coming weeks.

CLEW context: In the wake of the nuclear catastrophe in Fukushima, Japan, the Merkel government decided in June 2011 to accelerate Germany's nuclear exit and shut down eight nuclear plants and limit the operation of the remaining nine to 2022. This nuclear phase-out means that whole regions have to go through considerable structural change and find new ways of making a living.

“As fast as a battery”

A unique combination of a pumped storage hydro-electric system and a wind power facility – the ‘Naturstromspeicher’ – allows for higher turbines and the “local flexibility” needed for Germany’s Energiewende, writes Südwest Presse. The pilot project is being built in the southern German city of Gaildorf, Baden-Württemberg. The wind turbines sit on a nearby hill and their bases are filled with water. At the same time, the bases are located in external water reservoirs that hold most of the water. This system increases the possible hub height by 40 metres for more wind exposure and thus more power produced. Surplus electricity from the wind turbines is stored and converted by the hydro-electric pumped storage system made up of the reservoirs, the plant itself and a “near-natural” lower reservoir – a lake. The pumped storage can be brought to full performance capacity within 30 seconds. This system could run at full power when winds are strong, and store energy for the periods with little or no wind. This could be a possible solution to the Energiewende's energy storage problem. The federal environment ministry is helping fund the project with 7.15 million euros and the building company Max Bögl Group plans to sell the idea worldwide.

CLEW context: The German Energiewende poses huge technological challenges and calls for innovative solutions to issues like storage and efficiency. Pilot projects around the country aim to come up with feasible and economical solutions.

Read the project description in a PDF in English here.

Power to gas: “Hydrogen from Mainz is a popular brand“

The power-to-gas research facility Energy Park Mainz, near the city of Mainz, will start feeding its hydrogen (H2) into the local natural gas network in a test run, reports Frankfurter Allgemeine Zeitung. After successful operations following last year’s kick-off of the “building block for the Energiewende,” researchers want to initially add 1-2 percent H2 to the natural gas, with an ultimate share of up to 10 percent. “With this, we are contributing to improving the climate footprint of natural gas, because the added hydrogen is produced in a climate-friendly way and replaces part of the fossil natural gas,” said Mainz utility board member Tobias Brosze in a press release. Until now, the hydrogen produced through electrolysis – fuelled by excess wind from nearby wind turbines – has been sold and shipped by truck to gas stations and industry. The energy storage project is a joint project of Siemens, Linde Group, RheinMain University of Applied Sciences and the local utility Stadtwerke Mainz, and funded in large part by the federal government.

CLEW context: Converting renewable power into other forms of energy isn’t only about greening other areas of the energy system, it is also key to keeping the grid stable. Scientists are now converting electricity into gas like methane and H2, with the aim of using the gas grid as a form of storage and reducing dependency on carbon-emitting natural gas imports.

Find more information on the homepage of the ‘Energy Park Mainz’ in English here.

The district of Starnberg in Bavaria has introduced a ‘Climate Pact’ to further the local energy transition, reports the Süddeutsche Zeitung. Participants – mainly Starnberg’s 14 municipalities, but also local companies, civil society organisations and citizens – are encouraged to “seriously and ambitiously strive to enact climate protection measures and develop renewable energy,” the agreement says. To promote this goal, the district outlined 44 concrete measures, such as training local officials to include ecological concepts in their work, or replacing inefficient city lighting with LEDs. By signing the pact, each municipality commits to realizing at least three of these measures per year. The district highlights that it is doing its part to advance global climate goals: “It’s very convenient that the district’s climate pact was agreed upon almost at the same time as the historic breakthrough in Paris for a worldwide climate agreement in December 2015,” reads Starnberg’s website.

CLEW context: Citizens' engagement is an important reason that support for the energy transition is high despite rising power prices. To help turn the Energiewende into a local project, district governments introduce their own programmes to further the national objectives.

Find more information and the text of the Climate Pact on the district’s website in German here.

Also read CLEW's dossier The People's Energiewende, as well as the factsheet Citizens’ participation in the Energiewende.

With the establishment of ‘Freier Horizont’ (Free Horizon) in the state of Mecklenburg-Western Pomerania, Germany has its first political party of wind power critics, reports Birgit Sander in the Schweriner Volkszeitung. As a product of the citizens’ initiatives network of the same name, Free Horizon opposes “the implementation of the so-called ‘Energiewende’ that has gotten completely out of hand and contradicts the well-being of our state’s citizens.” Free Horizon, however, sees itself not as the anti-wind power party, emphasizes its leader Norbert Schumacher. Its aim is the economic development of all parts of the state and equal living conditions in rural areas, on the coast and in cities. The party will stand for election to the state parliament in September.

CLEW context: Support for the energy transition is high, but not everyone agrees on the best way to manage it. Wind power is especially contentious among the population, as large wind parks bring the Energiewende's effects to the backyard of the regular citizen. Citizen initiatives and corresponding counter-initiatives have sprung up across Germany.

Read the party’s programme on its website (in German) here.