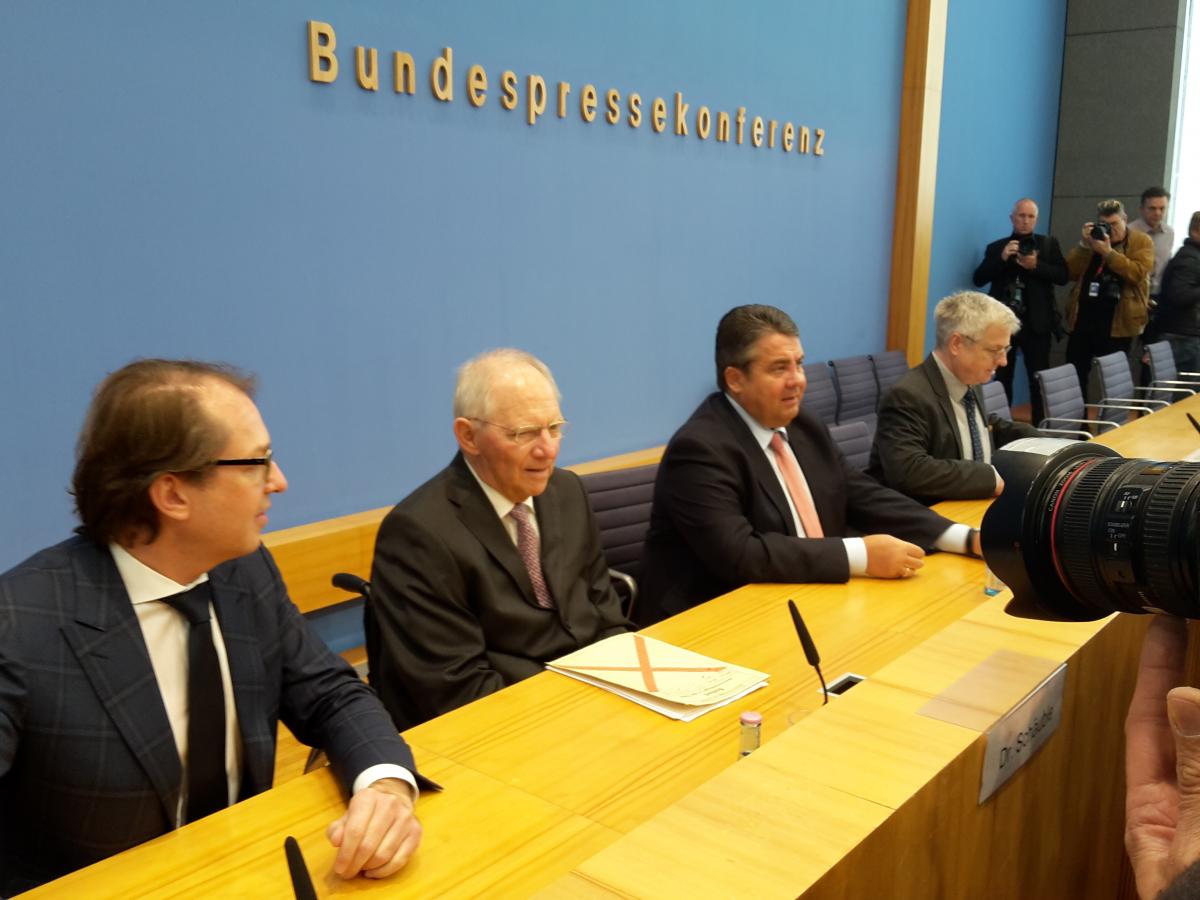 Following months of discussion, the German federal government announced its decision on Wednesday to offer incentives to buyers of electric cars.

“We are providing the impetus to quickly raise the number of e-cars on German roads,” said finance minister Wolfgang Schäuble, at a joint press conference of the finance (BMF), economics (BMWi) and transport (BMVI) ministries. At the same time, economics minister Sigmar Gabriel admitted the government’s previously stated target of one million electric cars by 2020 might not be reached: “How close we will get, we will see.”

Transport minister Dobrindt said the incentives were aimed at kick-starting growth in the e-car sector. “With this programme, we aim to reach the critical mass of 400,000 e-cars, which is 1 percent of the total of cars on German streets, so that market forces can then start working.”

The federal government and the auto industry will each invest 600 million euros in direct incentives by 2019. Buyers of purely electric cars will receive a premium of 4,000 euros, or 3,000 euros for hybrids – at a maximum list price of 60,000 euros. Customers will receive the premium only if the manufacturer agrees to pay half. Daimler, VW and BMW have already agreed to the plans. Foreign carmakers are also invited to join the scheme.

Original plans for a 5,000-euro premium were revised down because of objections from the auto industry, Schäuble said. With the new concept, the total budget of 1.2 billion euros will be enough to subsidise up to 400,000 e-cars. The government is to invest an additional 400 million euros in charging station infrastructure, and the federal vehicle fleet. There was no final decision on tax incentives.

Answering criticism that a buyer’s premium to support low-emission mobility would largely benefit the same auto industry that manipulated emissions tests, finance minister Schäuble said: "We are not, first and foremost, supporting the car companies, but e-mobility."

Gabriel added: “We demand a culture change within the automobile industry."

Asked about resistance to the plans from the CDU/CSU conservative parliamentary group, as well as from the finance minister himself, Schäuble said: “We will need some more persuasive efforts, but I'm convinced that the CDU/CSU group - including me - will support the programme.”

The federal cabinet is expected to approve the programme in mid-May.

German Energy Agency (dena) chairman, Andreas Kuhlmann, welcomed the government’s decision, saying it “straightens things out for everyone – politics, industry, trade and customers”. He added that innovative companies are key to the energy transition in the transport sector.

Friends of the Earth Germany (BUND) president Hubert Weiger objected to the government proposal in its current form, calling for energy efficiency and the kind of electricity used to power the cars to be taken into account. Otherwise, the plan would not “achieve effects that protect the environment or the climate”.

The German Association of Energy and Water Industries (BDEW) said development of publicly accessible charging station infrastructure was crucial for the success of e-mobility. In a press release, managing director Martin Weyand welcomed the current plans, but called for longer-term development beyond 2020.

The Green Party’s representative in the Bundestag, Anton Hofreiter, criticised the government proposal as a half-hearted attempt at an energy transition for the transport sector, shouldered by the public. He called for more holistic reforms. “What would be right: If the owners of big and expensive fuel guzzlers paid. We urgently need to reform vehicle tax. […] We need a strategy where we can embed the buyer’s premium – the switch to e-cars – in a stronger expansion of public transport.”