Factsheet
Connecting electric trucks to overhead power lines on so-called electric highways is the most energy-efficient route to zero-emission road freight. The technology is being tested in a number of pilot projects, with Germany and Sweden taking the lead. The biggest hurdle to a large-scale rollout is the initial infrastructure investment. Governments must step in quickly and decisively to push the technology, experts argue. 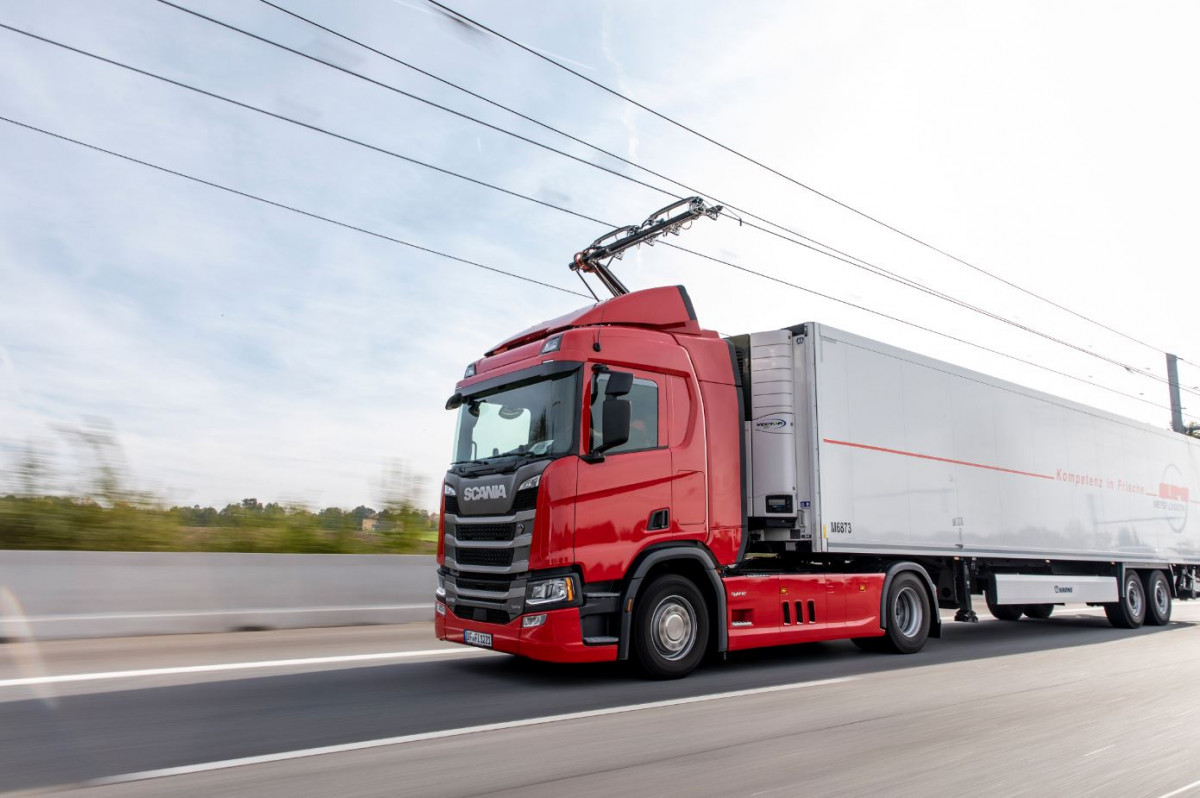 How does it work?

Electricity taken straight from the grid can power electric trucks' engines directly, and also charge on-board batteries. There are different approaches to get electricity into trucks on the move:

Roads that are equipped with any of these technologies are also referred to as eHighways, electric roads, or electrified corridors. Future trucks could be equipped with a relatively small battery to cover the way to and from electrified routes. In the early stages of a rollout, these distances could also be covered with a combustion engine in hybrid trucks.

Because heavy duty road freight is normally concentrated on main routes, only a small percentage of all roads would have to be electrified to make the system work. In Germany, for example, 60 percent of heavy truck CO2 emissions occur on only two percent of the road network, while almost 90 percent of truck trips after leaving the highway only cover 50 kilometres or less, according to Alan McKinnon from the Kühne Logistics University in Hamburg.

What are the benefits?

The most important benefit is overall energy efficiency. Electric trucks are by far the most efficient option for road freight, because they use energy much more sparingly than alternative propulsion systems, such as hydrogen fuel cells, not to mention those using synthetic fuels in combustion engines. 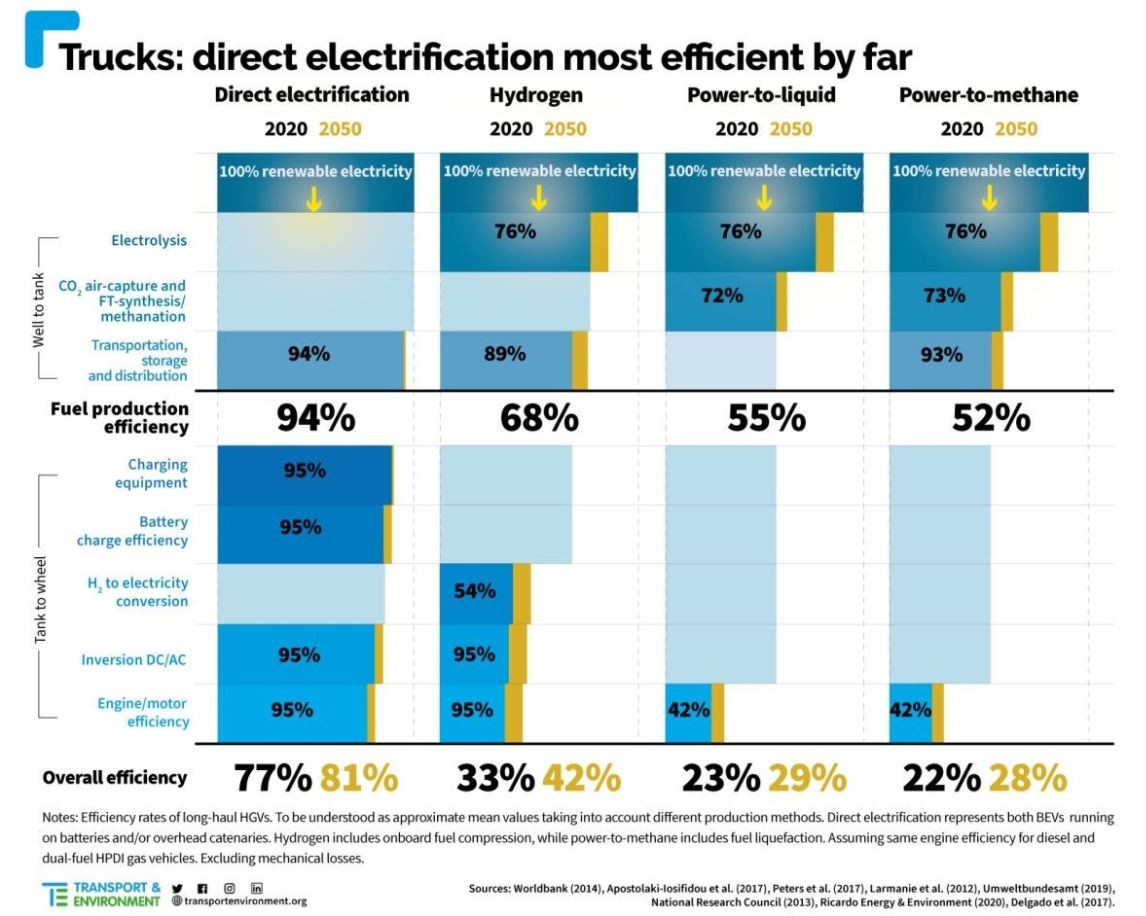 An e-Highway system is even more efficient than using purely battery-powered trucks, because some of the energy is lost when charging and discharging batteries. According to the German environment ministry, battery-powered trucks have an overall efficiency of 62 percent, compared to 77 percent for electric road systems and only 29 percent for hydrogen fuel cell trucks.

In addition, e-Highway trucks are lighter, because they don't need heavy batteries. This means they can carry more goods – making their efficiency per load even higher. Last but not least, making batteries is an extremely energy and resource-intensive procedure, with heavy environmental downsides.

The system also means there is no need for refuelling or recharging stops.

Making and building the infrastructure would also consume a lot of energy, but once it is installed, it could be used for decades to come - surviving many generations of battery-electric trucks. An additional advantage of catenary systems is that companies already have decades of experience with the technology in trains, trams and buses. The technology has been proven to work, and has relatively low maintenance and repair costs.

"Despite the necessary infrastructure investments, this option is currently the most cost-efficient way to reduce greenhouse gas emissions," the study said (p.183).

Several other studies have arrived at similar conclusions. For example, Cambridge University's Centre for Sustainable Road Freight concluded that "Overhead catenaries and compatible [heavy goods vehicles] are the most energy-efficient and cost-effective solution to fully decarbonise the UK’s road freight network."

"The investments in pantograph electric vehicles would pay back the vehicle operators in 18 months (through lower energy costs) and the electrification infrastructure could pay back its investors in 15 years (through electricity sales)," the authors argued in the July 2020 paper. 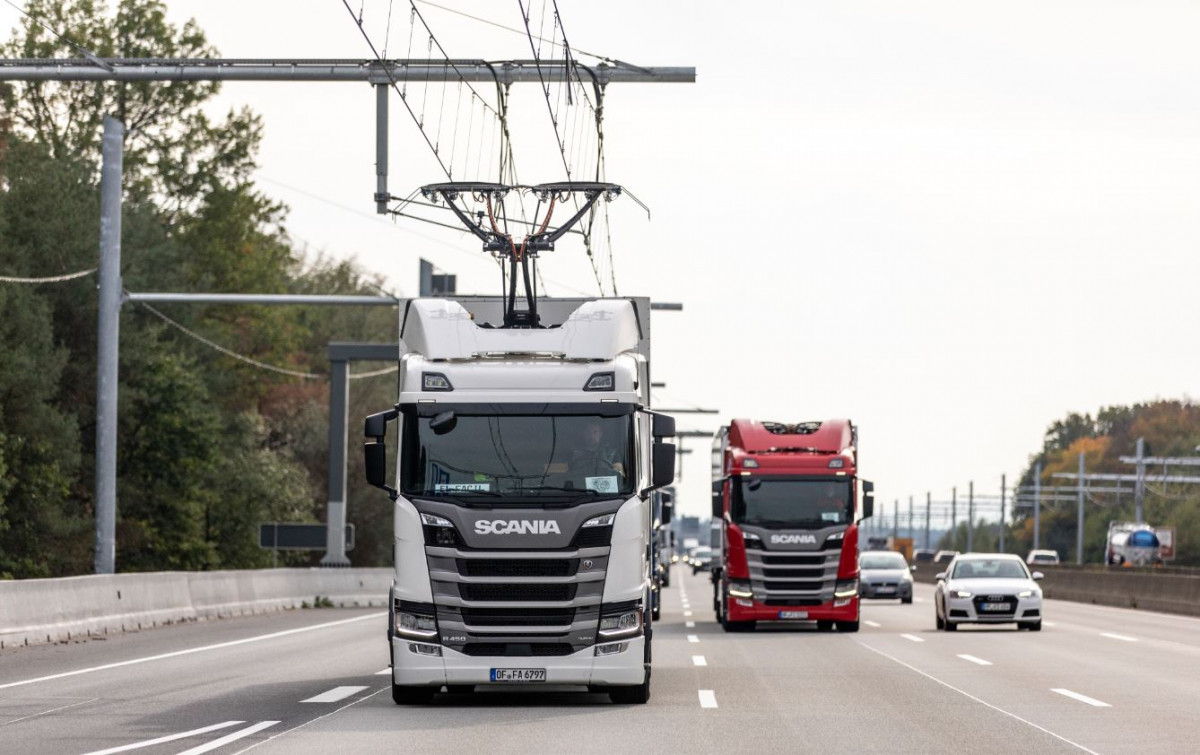 What are the downsides?

The most important disadvantage is the necessary infrastructure, which will require a large upfront investment of around two million euros per kilometre of road. As long as it isn't available, haulage companies won't buy trucks equipped with the technology to use it. And if there are no trucks, no-one will invest in the infrastructure, creating a chicken-and-egg problem. Some people also complain that the infrastructure is ugly, and researchers have warned that rejection by the locals can be a hurdle. Additionally, the infrastructure can only be used by electric trucks, but not electric cars, which need a separate charging infrastructure.

The system also makes e-Highway trucks with a small battery less flexible, because they can only cover short distances without overhead lines.

Where is it being tested?

Germany and Sweden have gone the furthest in exploring the possibilities of electric highways, and have been collaborating on the technology since 2017.

Sweden inaugurated the world's first electric road on a stretch of motorway in 2016 using an overhead line. The country has also started pilot projects to test other e-highway technologies. It completed the installation of the world's first wireless electric public road in December 2020, where 1.5-metre-long copper coils were installed under the asphalt between an airport and a city centre. Sweden is also testing the electric rail technology on a two-kilometre stretch of road.

In Germany, a similar wireless electric road is currently being built for a bus line in the city of Karlsruhe. The country's trials with overhead wires are much more advanced, and are strongly backed by the environment ministry (BMU). Several pilot projects using catenary systems are in operation in Germany:

What are the prospects?

In late 2020, Sweden's government commissioned the country's transport administration to develop a plan for electrifying 2,000 kms of road by 2030. Sweden wants to make its transport sector independent of fossil fuels by 2030.

Germany's government plans to decide which low-emission road freight technology to roll out on a large scale in late 2023, following current tests and evaluations, the country's transport ministry said in its "Overall Approach to Climate-Friendly Commercial Vehicles." Apart from electric highways, Germany also tests other propulsion technologies, such as hydrogen, in pilot projects.

Car industry lobby group VDA said in late 2020 that German truckmakers "are critical of catenary trucks with regard to the Europe-wide electrification of long-distance road haulage." The association said it didn't believe a large-scale European rollout was on the cards, given that "there are no coordinated agreements whatsoever, let alone multinational activities geared towards a cross-border rollout of overhead power line infrastructure." It added that only specific local applications "appear to make sense," for example near ports or mines.

Research Institute Fraunhofer ISI also said "there currently is no coordinated strategy or vision for eHighways within Germany, with neighbouring countries, or at the EU level."

Experts are split when it comes to evaluating the future prospects for this technology. Logistics specialist McKinnon says "the idea has gained a lot of industry and government traction."

But battery-electric trucks are advancing rapidly at present, and the window for broad deployment of electric highways could close once these models have started to spread widely.

This is why many experts consider rapid and decisive government action crucial. "A rapid rollout of a large-scale test infrastructure will be decisive if catenary trucks are to remain in the technological race," transport economist Carl-Friedrich Elmer from the sustainable transport think tank Agora Verkehrswende told the Clean Energy Wire. "If the government builds a few hundred kilometres of overhead lines within the next years, catenary systems still stand a chance. If not, the technology is likely to disappear from the menu." [Read the analysis "Climate targets force trucks into race to clean up transport]

Mobility researcher Florian Hacker from the German sustainability think tank Oeko-Institut, who has been heavily involved in research on catenary trucks, also told the Clean Energy Wire that the technology will "require government action now." But he stressed a partial rollout on specific corridors with heavy traffic also remains a possibility. "Once you reach a critical mass, this will create a market to use this infrastructure." [The full interview: Catenary trucks still stand chance in race to decarbonise road freight – researcher]

Green vehicle expert Auke Hoekstra, a researcher at the Eindhoven University of Technology, said it will be difficult to turn eHighways into a reality on a large scale due to the expensive infrastructure. But he also insisted that "it remains an option. Whenever the right vision and the right circumstances come together – essentially many trucks doing local trips – then catenaries are an excellent idea with a very good business case." [The full interview: Battery-electric trucks will win race against fuel cells and e-fuels – researcher]