Factsheet
The central German state of Hesse has been a latecomer in terms of the country's energy transition, the Energiewende, but has gained ground by swiftly expanding renewables in recent years. The state that is a European transportation hub has been governed by a coalition between the conservative CDU and the Greens since 2013 and plans to continue on its path to de-carbonise its energy system completely by 2050. Hesse's citizens overwhelmingly support the Energiewende and are among the most active in Germany when it comes to adopting new technologies. [Update adds 2018 results]

CDU: The CDU calls the energy transition “a generational challenge” that requires “smart decisions free from ideology.” The conservative party that has been in the state’s government since 1998 says Hesse’s energy supply has to be “secure and clean – but most importantly, it has to be affordable.”

SPD: The Social Democrats say Hesse should become “a role model” in energy transition policies. To speed up renewables expansion and boost employment in the sector, the party wants to “remove administrative barriers and provide building areas.”

Green Party: The Greens call climate change a “decisive challenge of our time” and Hesse should “make a substantial contribution” to limiting it. The environmentalist party wants to set up a detailed expansion plan for renewable power sources and reduces emissions ambitiously by boosting action in the power, heating and transport sector.

Left Party: The Left Party emphasises the role of citizens in the energy transition, pledging to “strengthen energy cooperatives to make profits available to citizens.” The party rejects auctions for renewables as they are “too risky” for small investors.

FDP: The pro-business FDP calls for “correcting the course” of the state’s energy policy. It argues more and more people are against an “unchecked” expansion of wind power and says “the climate cannot be saved by destroying nature reserves” to build wind turbines. It criticises that a lot of money has been spent on renewables but “emissions are not really going down.”

AfD: The right-wing nationalist party does not believe that man-made climate change is a problem at all. It calls for ending Germany’s renewable power support altogether and emphasises “domestic” power sources like coal. 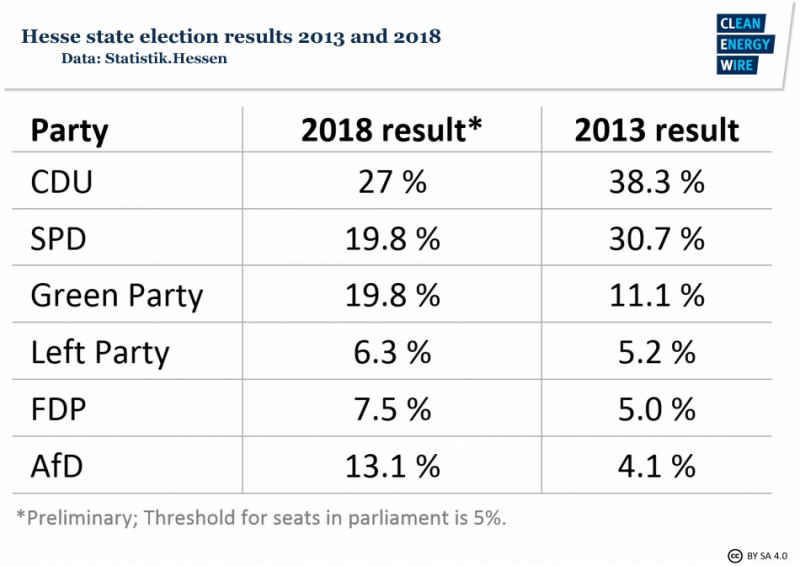 The central German state of Hesse has been one of the late-starters in Germany’s energy transition, the Energiewende. Ten years ago, in 2008, the state that is neither blessed with a lot of sun nor wind and which does not have large capacities for hydro power still sourced less than 6 percent of its power consumption from renewables – three times less than the national average at the time. By the first half of 2018, the share had climbed to more than 22 percent, still less than the national average of 36 percent but this time with a much steep growth trajectory. The incumbent CDU-Green government has promised to bring the share to 25 percent by 2019.

The share of renewables in primary energy consumption stood at nearly 9.5 percent in 2016 and the state plans to achieve 100 percent renewable energy supply by 2050. With its Energy-Agenda 2015, Hesse has “moved from the end of the ranking to the top group” of German states in terms of energy transition progress, economy and energy minister Tarek al-Wazir said. 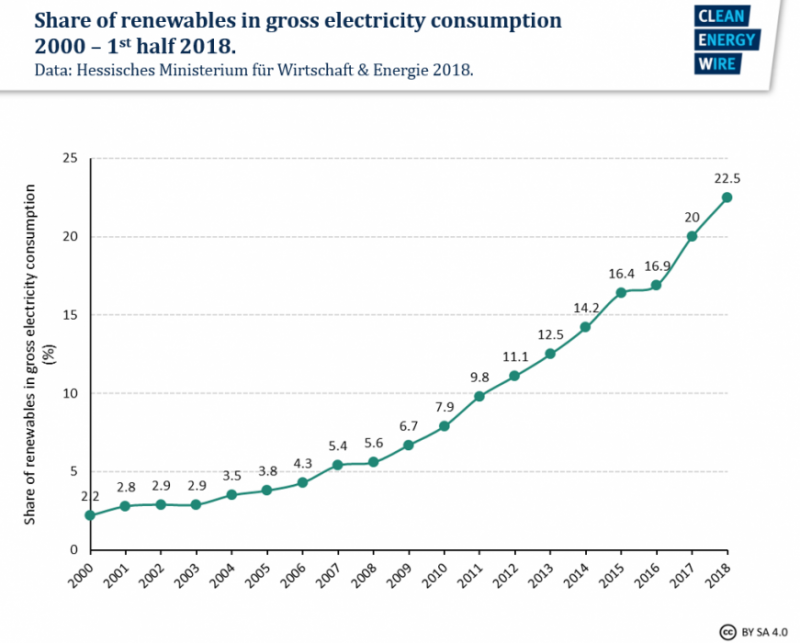 According to the KfW Energiewende Barometer, with 28 percent of all households active in applying energy transition technologies, Hesse is among the most committed federal states in Germany. Just like for other states in Germany’s southern half, greater sunshine intensity and household incomes above the national average facilitate to acquire and use green tech like solar power storage systems or e-cars in private.

Greenhouse gas emissions in Hesse are dominated by the transport sector. It contributes 49 percent to the state’s carbon footprint, compared to just 30 percent on the national average. This is mainly due to the Hesse’s central location in Germany and Europe, which makes the state a transport hub and important intersection of major trans-European roads, and due to the Frankfurt Airport, the biggest in Germany and one of the largest on the continent. Airplane fuel that is being filled at the airport is counted in the state’s emissions’ record but effectively consumed elsewhere, the state government says in its 2017 Energiewende monitoring report. 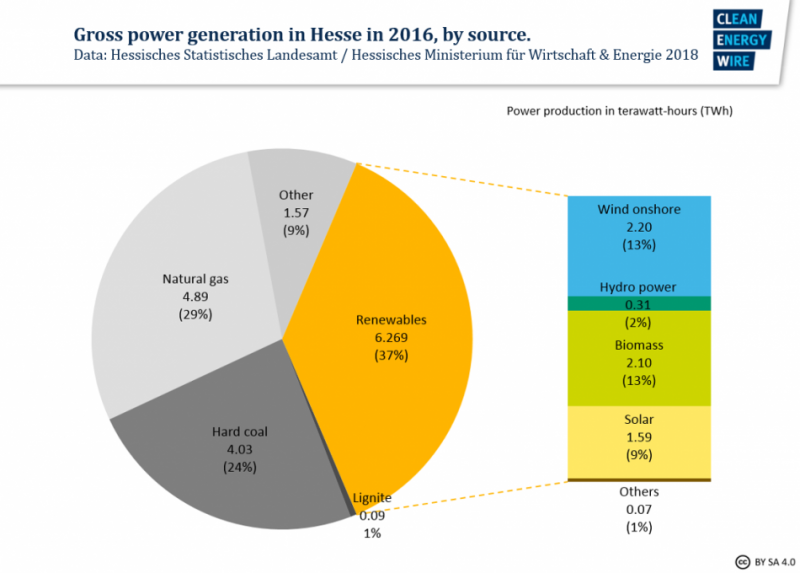