Factsheet
Aviation is one of the fastest-growing sources of worldwide greenhouse gas emissions. Direct emissions from airplanes and other aircrafts account for more than two percent of global emissions, roughly equivalent to the total greenhoue gas output of Germany. Airports in the country deal with more freight than those in any other EU member by far, which makes emissions reduction in airborne cargo transport especially relevant for Europe's biggest exporter.

What the experts say:

“The best-case scenario according to the airfreight sector’s own plan is for emissions to remain at 2020 levels for 15 years through carbon offsetting. After that there’s no plan in place at the Civil Aviation Organization (ICAO) for substantial reductions other than a large-scale deployment of sustainable aviation fuels.” Christopher Surgenor, Editor, London-based newsletter GreenAir Online

“[…] future growth in the European aviation sector will be inextricably linked to its environmental sustainability.” European Aviation Environmental Report, 2016.

“An extensive reduction of greenhouse gas emissions in aviation [by 2050] can only be reached with synthetic fuels, because switching to alternative propulsion systems – which have yet to be developed – on a large scale by 2050 is unrealistic.” Industry association BDI in its 2018 climate paths study.

“The inclusion of aviation in European emissions trading should not lead to a distortion of competition to the detriment of European (freight) airlines.” Measures for a Competitive Air Freight Sector in Germany (2015), Co-statement of Federation of German Industries (BDI) and the German Aviation Association (BDL), 2014

Aircraft CO₂ emissions within the EU increased by about 80 percent between 1990 and 2005. By 2020, global aviation emissions are projected to be about 70 percent higher than in 2005 and the International Civil Aviation Organization (ICAO) forecasts that the sector's greenhouse gas output could grow by a further 300 to 700 percent by 2050.

With about 2.4 million tonnes of carbon dioxide emissions, German domestic aviation was responsible for 0.26 percent of its total CO₂ output in 2016. 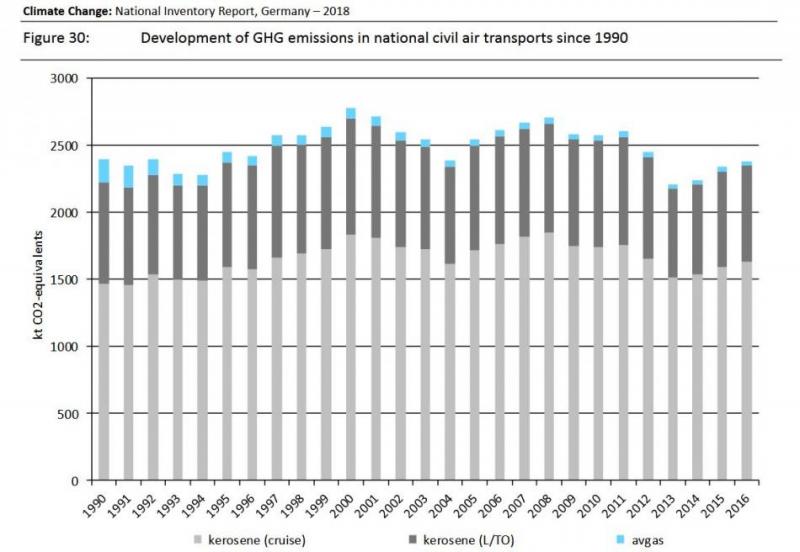 Besides its considerable CO₂ footprint, aviation is responsible for other greenhouse gases (such as water vapour, aerosols and nitrogen oxides) that contribute to global warming. A 1999 special report on aviation, prepared by the International Panel on Climate Change (IPCC), estimated the total impact of aircrafts on the climate to be two to four times higher than that of their CO₂ emissions alone. However, the effect of non-CO₂ emissions hinges on the conditions under which they are emitted, namely flight altitude, time of a given day or the weather at a given location. Further research is required to better understand and control these mechanisms, the European Parliament Research Service writes in a report.

For export-oriented Germany, air cargo plays an important role in the country's total aviation emissions - but hard numbers on the freigth sectors impact are lacking. About half of all goods moved in and out of the country are not transported in cargo planes, but in the belly of passenger planes, making a distinction between freight-related emissions and passenger-related emissions rather difficult. German cargo planes use 30-60 percent less fuel per weight unit than passenger planes, because the available space can be used more effectively, according to the German Aviation Association (BDL). Fuel costs can comprise up to 30 percent of an airline's total operating costs.

The share of aviation in total transport emissions is predicted to rise steadily as the globalisation of travel and trade intensifies. The International Air Transport Association (IATA) forecasts that the total air cargo quantity will rise to 62.5 million tonnes in 2018 – up from nearly 60 million tonnes moved in 2017, which already had been a banner year for the industry.

Only three percent of German exports by volume were moved around with aircrafts in 2014, which in terms of emissions is the costliest of cargo carrier options. It is therefore mostly used for items that are either very expenisve, urgently needed or easily perishable, the German Aviation Association says.

Airports in Germany deal with more freight than those in any other EU country by far (4.5 million tonnes in 2016, nearly twice that of France, its closest competitor). As for freight logistics companies, Germany is top in the world with the three biggest freight forwarders all based in the country: DHL Supply Chain, Kühne + Nagel, and DB Schenker. And then there’s Germany’s aviation heavyweight Lufthansa, which owns Lufthansa Cargo, one of the world’s leading cargo airlines. 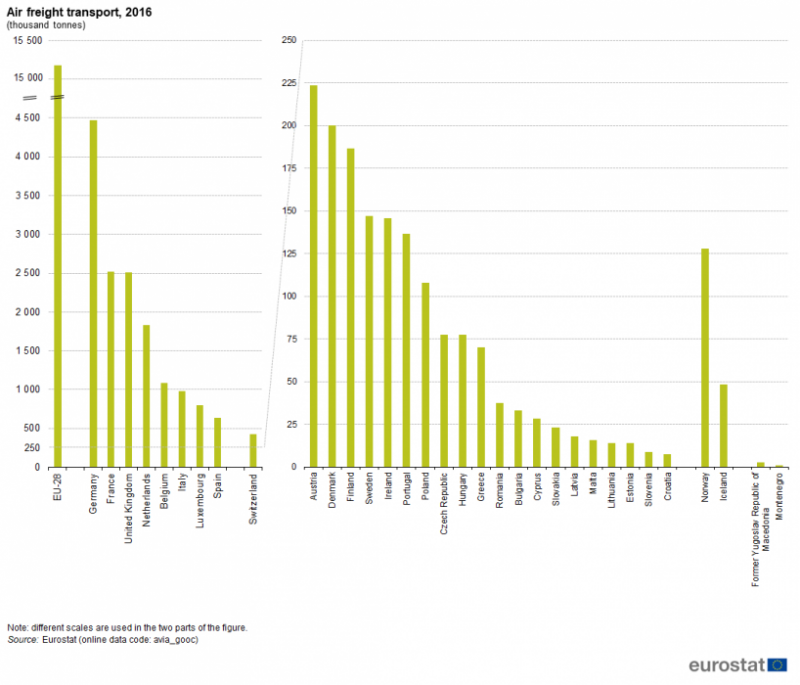 In 2009, the global aviation industry pledged to increase fuel efficiency by 1.5 percent a year and set a goal to halve net emissions by 2050, compared to 2005 levels. The German Aviation Association says the sector has increased its efficiency by 42 percent since 1990 for domestic flights, yielding a 7 percent reduction in total CO₂ emissions. It attributes these gains to lighter-weight materials, better cargo organisation, and the improved fuel efficiency of engines.

Cutting total aviation emissions in half, however, is another story. Transport logistics experts say that this will require significantly more investment, fundamental changes in aircraft technology, and the adoption of low-carbon fuels – high hurdles for an industry that often operates on tight profit margins.

Since 2012, emissions from flights within Europe have been reported to the EU Emissions Trading System (EU ETS), and thus are subject to carbon pricing. With the EU ETS, the EU wanted to create a market mechanism that determines a price for CO2 emissions and creates incentives to reduce emissions in the most effective way.

Originally, the aviation regulation covered all flights to and from European airports, but following international criticism, the scope was reduced to cover intra-EU flights only, in order to create “a window of opportunity” to support the development of a global solution by the International Civil Aviation Organization (ICAO). At the end of 2017, the EU decided to prolong the exemption for flights outside of its territory to the end of 2023.

Brussels-based watchdog Transport & Environment argues that the EU ETS is a measured success, as it serves as a model for others and enjoys a high degree of compliance. Because of the low CO₂ permit prices that result from an oversupply of allowances, however, the aviation EU ETS has not yet had the desired impact on aviation emissions, says Transport & Environment.

According to the organisation, emission reduction from the aviation sector's inclusion in the ETS cannot be quantified yet. The European Commission, however, says that the system has contributed to reducing the aviation sector’s emissions by more than 17 million tonnes a year.

The Paris Climate Agreement does not mention international aviation, and the UNFCCC and ICAO cooperate to address its climate impact. After years of stalling, ICAO settled on a carbon offsetting scheme for international flights. The Carbon Offsetting and Reduction Scheme for International Aviation (CORSIA), which will run from 2020 to 2035, requires airlines to monitor emissions on international routes and to buy and surrender “emission units,” the modest goal of which is to keep emissions at the 2020 level, not to reduce them.

Participation will be voluntary during the pilot and first phase from 2021 to 2026, and countries responsible for more than 80 percent of global aviation activity have already expressed their intention to do so, including all EU countries. Based on this, CORSIA should offset about 80 percent of the emissions above 2020 levels between 2021 and 2035.

As for alternative jet fuels, a key component of ICAO’s vision, some critics are sceptical that they will actually help – and not hurt if the wrong sources are cultivated. The International Council on Clean Transportation (ICCT) concluded that “vegetable oil-based feedstocks tend to have a higher carbon intensity than conventional jet fuel when land-use change effects are taken into consideration, and only [alternative fuels] from lignocellulosic energy crops, agricultural residues, and waste feedstocks are shown to provide substantial emission reductions compared to conventional jet fuel.”

Electric aviation, possibly in hybrid solutions that include low-carbon fuels, is not just a distant vision, says Josef Kallo, director of the Institute for Energy Conversion and Storage at Ulm University [Read the full interview with the Clean Energy Wire here]. For flights ranging up to about 1,500 kilometres, Kallo says that combining electric motors with fuel cell technology is feasible - but at a high price. “As long as kerosine remains as cheap as it is today,” says Kallo, “and as long as we don’t worry about external costs such as environmental damages and climate change, conventional technologies will always have a cost advantage.”