Factsheet
Trucks and other freight vehicles are the backbone of Germany’s export-driven economy. But the rapid growth in traffic volumes increases the pressure of reaching emissions reductions in the transport sector, which already lags behind on fulfilling its climate targets. The car industry eagerly looks for concepts to adapt their heavy-duty vehicles to the demand of the future, but a broader mixture of new transport concepts and political solutions is necessary to make Germany’s road cargo business more sustainable.

What the experts say

In Germany, “many technologies for increasing efficiency have hardly been used so far, although they are available on the market and offer comparatively cost-effective mitigation options.” – Federal Environment Agency (UBA)

“[We] believe that the [emissions] reduction levels proposed by the [European] Commission for 2025 and 2030 are far too aggressive [...] the 2025 ambition level is too stringent given the short lead-time for this first-ever CO2 target.” – European Automobile Manufacturers’ Association (ACEA)

Over 95 percent of CO2 emissions in Germany’s transport sector are caused by road traffic, and about one third of this is caused by long and short-distance road haulage, according to the state-funded German traffic research portal FIS. While the country’s total emissions sank by nearly one third since 1990, carbon volumes have largely stagnated in the transport sector over this period and even increased slightly in recent years due to the reduced use of biofuels and the sustained boom of the German economy. Despite the introduction of a nationwide road toll for freight trucks in 2005, traffic volume growth has even outpaced economic growth since then.

Temporary reductions in CO2 levels have been made possible by greater engine efficiency, but were also caused by substituting petrol with diesel and more frequent refuelling stops at near-border service stations abroad, where fuel often is cheaper than in Germany, the FIS says.

However, while the specific emissions caused by road haulage are greater than those generated by long-distance inland shipping or railroad carriage, the difficulties of installing adequate infrastructure for the latter two makes trucks and other freight vehicles the most energy-efficient method for bulk transports on shorter distribution distances, according to the Heidelberg Institute for Energy and Environmental Studies (IFEU). 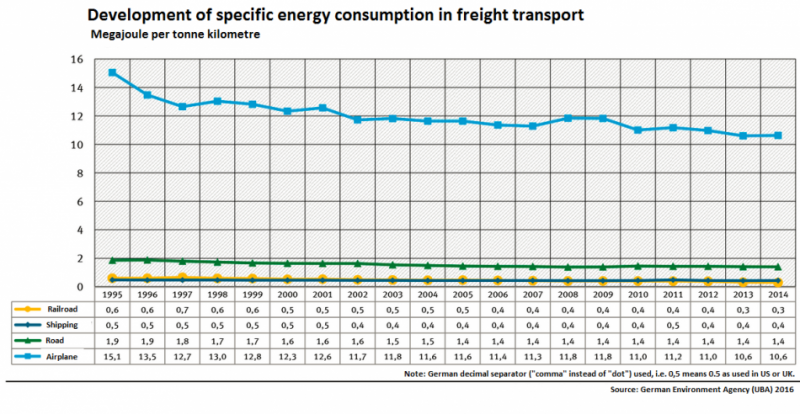 The country’s cargo logistics industry is dominated by trucking, which moves 73 percent of all commodities traded domestically and internationally, followed by railroad transport with nearly 18 percent, and inland shipping with just over 9 percent.

In all of Europe, freight carrying vehicles accounted for around a third of road transport CO2 emissions in 2016. This figure could soon hit 40 percent, as passenger car emissions are projected to gradually sink – while trucking emissions are not.

Over 40 percent of the trucks on German roads and highways are registered abroad, the Federal Office for Goods Transport (BAG) says. Most of these are eastern European freight companies, which often cater for German customers.

Despite the large number of international freight forwarding companies active in Germany, the country’s domestic fleets of lorries, light-weight trucks, tanker trucks, and semi-trailers lead Europe in terms of volume, carrying 310,142 million tonne-kilometres (tkm) annually, mostly within the country. In recent years, their freight volume, emissions, and profits have shot upward, reaching a temporary high in 2016.

Currently, trucks are not subject to CO2 emission or fuel-consumption standards either in Germany or at the EU level. For this reason, unlike with automobiles, trucking has not experienced significant advances in e-mobility and fuel efficiency.

According to a report carried by the energy policy newsletter Tagesspiegel Background, German EU commissioner Günther Oettinger has recently sought to water down a joint initiative by several member states to tighten European emissions limits for trucks – the first one of its kind.

Under this scheme, new lorries – the largest first, then smaller ones – would have to have lower carbon emission levels by 15 percent by 2025 based on 2019 levels, and then by another 15 percent by 2030. The same legislation would incentivise the use of zero and low-emission heavy-duty freight vehicles. According to EU experts, this could reduce CO2 emissions by 54 million tonnes (equal to Sweden’s annual emissions) between 2020 and 2030. Moreover, it would save trucking firms plenty at the pump.

Of course, in the aftermath of the ‘dieselgate’ scandal, measuring compliance with emissions regulations is critical. Authorities would have to monitor “real-world fuel consumption data” based on mandatory, standardised fuel consumption meters, and serve penalties for non-compliance - a necessity that remains difficult to implement for passenger vehicles.

While the EU targets may be called too ambitious by carmakers, an alliance of 36 freight forwarders, associations, and transport companies – including DB Schenker, Siemens, Tchibo, and five countries (Germany not among them) – had lobbied for a 24 percent emissions reduction by 2025. Otherwise, they insisted, the transport sector won’t hit the targets specified in the Paris accord.

There is a whole range of options suitable for bringing down carbon emissions in road freight transport, from the introduction of hybrid trolley trucks or exhaust pollutant limits to green freight programmes and fuel-efficiency labelling. Studies show that trucks and semis can gain significantly in fuel efficiency by improving engine technology and aerodynamics, which could reduce the carbon footprint of, for example, tractor-trailers by 40 percent. The electrification of freight logistics could help cut on-road freight’s emissions by over a quarter by 2050.

German luxury carmaker Daimler, which also is the biggest producer of trucks in the country, has recently displayed a range of options that it researched for making its vehicle engines more sustainable and meeting the EU’s 2030 vehicle emissions limits. The company says hybrid engines are no solution for heavy-duty vehicles as they cannot be used in an economically viable way, arguing that traditional diesel engines still have an untapped emissions reduction potential of 10 to 20 percent.

According to Daimler researchers, diesel trucks remain far superior to electric trucks when it comes to energy efficiency. They argue that a truck filled with 224 litres of diesel fuel would have the same range as an e-truck with an eight-tonne battery. A possible remedy for the difficulty of installing economically viable batteries in heavy vehicles could be Germany’s first e-highway, a concept currently being tested in the federal state of Hesse and financed in the framework of the country’s 2020 Climate Action Programme. Trucks use a catenary system (overhead electrical wires) to charge their batteries as they drive along the five-kilometre stretch of the highway. The trial course is designed and operated by industry heavyweight Siemens, the Technical University of Darmstadt, and five haulage companies - and could be copied countrywide if successful.

There are also strategies and pilot projects aimed at promoting the switch to alternative fuels (hydrogen, liquefied natural gas, synthetic fuels, renewable methane), redesigning the road toll system to benefit zero or low-carbon trucks, or increasing the diesel tax. In June 2018, the German government set up a support programme for freight vehicles that run on more efficient and low-carbon engines. Freight companies receive grant payments of up to 40 percent of the additional cost for modern cargo vehicles or lump-sums for specific technologies, for example 40,000 euros for e-trucks with a weight of more than 12 tonnes. 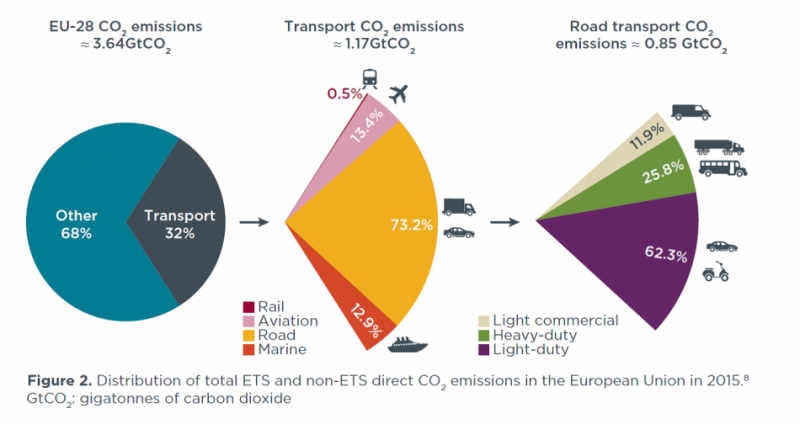 According to Germany’s Federal Environment Agency (UBA), a reform of the toll system for heavy-goods vehicles is necessary to reveal the “true cost” of road haulage. Possible reforms include an extension to vehicles below 7.5 tonnes of weight; including emissions levels in the tariff system; or staggering road pricing according to efficiency criteria. If trucks and trailers had to pay punitive tolls and carbon costs according to the ‘polluter pays’ principle, their competitive advantages over rail would diminish, the UBA says.

For the “last mile” of commodity transports in inner cities, the expanded use of cargo bikes and pedelecs (pedal electric cycles) is an obvious possibility that is already being tested on a large scale. Projects like logSPAZE by the Fraunhofer IAO in Stuttgart test alternative urban delivery concepts with pedal-powered vehicles in cooperation with local companies to find out which solutions are most suitable to relax traffic levels and reduce emissions and air pollution in densely populated areas.