Factsheet
Germany has switched its support model for onshore wind power installations from predetermined and guaranteed remuneration rates to setting the price in auctions. Following solar power and offshore wind power, Germany’s most important form of renewable energy generation also determines its remuneration rate via the lowest accepted bids. While some regard tenders as a much-needed step for reducing renewable energy costs, others say they disadvantage smaller bidders due to their limited financial capabilities. However, smaller citizen energy projects turned out as the big winners in the first auctions - but doubts about the citizen projects' authenticity and their ability to implement projects has led authorities to review the auction design. [UPDATES results of third auction; BNetzA raises maximum support rate; infographic on support rate development] 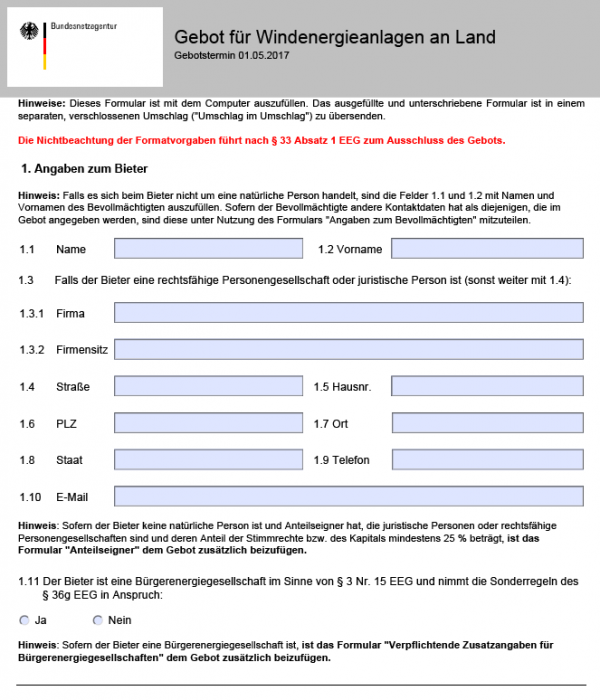 Bidders start by identifying an appropriate and available windmill location before they move on to obtain governmental authorisation for construction under the Immission Protection Law (BImschG). They then register their project with Germany’s Federal Network Agency (BNetzA) database three weeks before filing the application [See the agency's website in German or the CLEW factsheet How to build a wind farm in Germany in English for a more detailed description].

Getting the BImschG authorisation may take over one year and requires initial investments contingent on the project’s size as well as the complexity of legal requirements (environmental protection, noise control, etc.) and natural conditions of the location. This has been a prerequisite for any commercial wind power installation already before the remuneration model was switched auctions and is deemed necessary to ensure that bidders are committed to their project.

The BNetzA demands a registration fee and a security of 30 euros per kilowatt of installed capacity for each project. This too is meant to ensure bidder commitment. Submitted projects are then evaluated primarily on the basis of their proposed support rate – the lowest bidder is awarded with a contract. In case of parity, the lower tendered capacity takes precedence.

To ensure that so-called citizen energy cooperatives are not disadvantaged in these first steps of the auction procedure, the Renewable Energy Act (EEG) provided them with a special set of rules. Since citizen projects on average were thought to be not as financially strong as institutional bidders, the EEG allowed them to submit bids without having to obtain a license beforehand and also granted them a longer implementation period – 54 months instead of 30 months.

The relaxed requirements helped citizen energy cooperatives to turn out as the "big winners" in the three rounds of auctions. In the third round in November 2017, they secured 98 percent of the tendered projects with an average support rate of 3.8ct/kWh. However, the success of citizen projects quickly led to critical voices saying that the different set of rules applied to them led to market distortion.

The German Wind Energy Association (BWE) criticises the “flawed legal definition of the new actor group ‘citizen energy’”. The long implementation period of more than four years made a reliable projection of future expansion volumes "almost impossible." The lobby group called for consistent rules for all bidders and even for exempting certain citizen-owned projects from mandatory auctions altogether.

The sustained success of citizens’ energy projects led the BNetzA to raise the maximum support rate for onshore wind power installations to 6.3ct/kWh in 2018 auctions. Without the raise, the maximum support rate would have had to be derived from the results of previous auctions. But as these were dominated by citizen projects, bids were based on projected future input prices that do not necessarily reflect current cost levels, the BNetzA says. The support rate in this case would now stand at 5ct/kWh, less than the current energy generation costs for onshore wind power of 5.6ct/kWh. 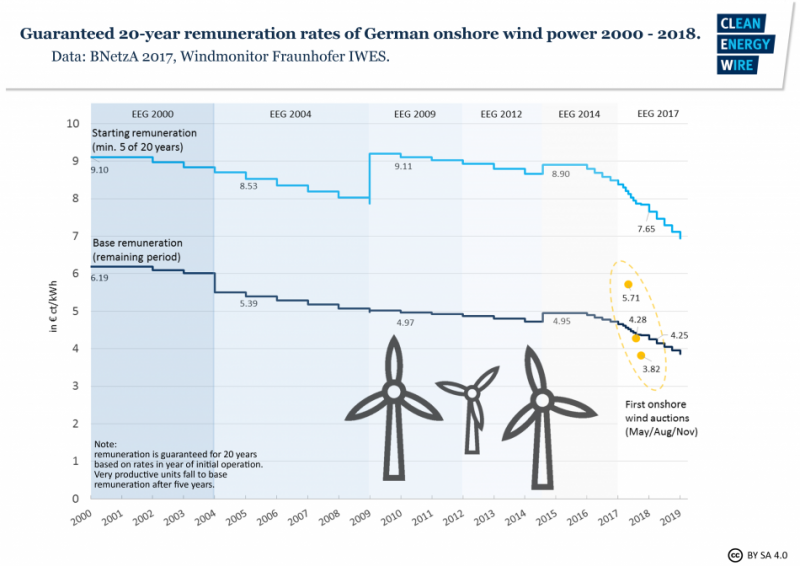 After the contract award

Winning bidders are required to implement their projects within their respective time limits to safeguard their auctioned support rates. If this period is exceeded, the arrangement becomes void and security payments are retained by the agency. Late fees for larger bidders apply after two years, the BNetzA specifies. Operators of the finished wind parks are obliged to feed the generated power into the grid rather than consuming it themselves for the entire support period of 20 years.

Small turbines with a capacity of up to 750 KW, pilot projects built primarily for technology research and development purposes and also projects that received permission until the end of 2016 and are implemented before the end of 2018 are exempt from auctions. Remuneration for turbines completed in this transition period, however, gradually decreases depending on the total expansion volume by up to 2.4 percent per quarter.

Why change the system?

Former economy minister Sigmar Gabriel has described the switch to auctions as “the Energiewende’s next stage”. Auctions are intended to keep renewables expansion stable and predictable by fixing supported volumes. The system should also boost competition among investors in order bring down costs.

Recent expansion of more than 4,400 MW on average per year exceeded the government’s planned “target corridor” of 2,500 MW, as it had been fixed in the Renewable Energy Act’s (EEG) reform in 2014.

The switch to auctions does not change the principle to support renewables expansion financially as such and retains many elements of earlier EEG stages. Operators continue to have the right to have their installations connected to the grid to transmit and distribute their electricity. Grid operators have to provide appropriate grid capacities or otherwise pay compensation if turbines are throttled down.

Just like under the old support system, operators sell their product directly on the market. They continue to receive a premium covering the difference between wholesale power prices and guaranteed remuneration. The major difference is that under the old system, this “market premium” was set by the state. Now it is determined by the operator’s offer in what the BNetzA calls a “pay as bid” principle.

The government's special provisions for “locally rooted” citizen energy cooperatives are meant to retain the “diversity of actors” in German wind power projects.  These have to consist of at least ten citizens, the majority of whom living in the region where a wind park is built. Citizens' projects are capped at a capacity of 18 MW.

The cooperatives’ bids were facilitated by easing the BImschG’s requirements, lower security payments and the extended implementation period. But repeated criticism on theses advantages for citizen projects by lobby groups such as the wind industry's BWE, the German Engineering Federation (VDMA) or utility association BDEW led to an amendment of the rules, meaning that citizen projects too have to procure a BImschG license before the submitting their bid, though so far only for auctions between February and May 2018.

However, citizens' projects continue to not necessarily receive the support rate they calculated with but instead that of the highest wining tender, granting them preferential financial treatment compared to larger bidders, the BMWi argues.

Before the first auction, critics of the reform say that auctions would have adverse effects on actor diversity regardless of the special conditions for small bidders and night ultimately even lead to a fall in onshore wind capacity as older plants retire. The BWE called tender-based support “the wrong instrument” as small bidders lacked the capabilities to bid in the formally complicated tenders. As explained above, the BWE now is more concerned that generous rules for citizen projects might endanger expansion targets.

But doubts have also arisen over the authenticity of citizen projects, since many of the successful small-bidder projects in the first auctions can be associated with the major wind power planning company UKA, according to a report by public TV station MDR. According to the report, UKA is Germany’s second largest wind park planner, which has assisted in founding 40 citizens’ energy cooperatives across the country.

In a letter addressed to MDR, UKA argues that most citizens’ cooperatives lack the resources needed to successfully take part in auctions and therefore would rightfully benefit from its assistance. The BNetzA examined whether the citizens’ wind power projects that succeeded in the first round of auctions have really met the required criteria, but could not find "any evidence that legal requirements were violated."

Larger bidders say the auction model could become a success, provided that the average project is allowed to grow in scale. Danish turbine producer heavyweight Vestas told news agency Reuters it did not consider the Danish government’s plans to phase out subsidies altogether by 2030 to be a problem if larger onshore developments can be implemented. In the same vein, Swedish utility Vattenfall said it aimed to implement subsidy-free onshore projects in the near future.

Germany’s switch to auctions for renewables support started with solar power installations. The BMWi called the first experiences made with the new system a success, saying that “competition (…) was high and prices fell from round to round, which was good news for consumers.” It emphasised that also small bidders managed to win tenders - a view that was backed by the latest results.

Similarly, the first round of offshore wind power auctions was deemed a success. Much to the surprise of many observers, Danish energy company Dong and German utility EnBW made successful bids with demanding zero support. However, implementation of these projects will not take place before 2024.

The BWE warned that auction experiences in other countries often resulted in a high rate of projects that ultimately had not been implemented. It also criticises that onshore wind power expansion volumes eligible for support make no difference between turbines for repowering and do not account for decommissioned windmills, making the tendered 2,800 MW a mere gross value.

According to calculations by energy consultancy enervis, the share of repowering in total tender volumes is set to steadily increase over the next years. In its scenario for 2023, “the entire planned expansion volume will be used for replacing phased-out installations,” which could result in a net-decrease of wind power capacity, enervis explains.

Matthias Zelinger, head of VDMA's Power Systems branch, says it was difficult to predict how total capacity will be affected in the medium-run. “The wind power industry is ready to face the competitive challenges posed by auctions,” Zelinger said. However, he called on the government to reconsider the tendered volumes and expand its targets if necessary.