On Tuesday, one of the world’s biggest wind industry fairs opens in Husum in the state of Schleswig-Holstein, which produces much of the country's wind power.

Germany itself has long been an important location for the industry. But this year, it’s under pressure.

“The situation in the wind power industry is coming to a head much quicker than we feared,” trade union IG Metall recently said in a press release.

IG asked dozens of turbine manufacturers and their suppliers about their business prospects. 40 percent expected market conditions to deteriorate in the near future.

The German Wind Energy Association (BWE) says companies now have to rely entirely on existing orders, and that “a reliable projection for expansion over the next years is scarcely possible.”

The sector’s most important lobby group argues this not only threatens jobs but also puts Germany’s targets for expanding renewable power production in jeopardy.

Wind power has been a key pillar of Germany’s ongoing transition from a fossil fuel- and nuclear-powered economy to one that runs renewable energy. In 2016, the country generated 29 percent of electricity from renewables, including close to 12 percent from wind.

Support for this development has been provided through the country’s Renewable Energy Act (EEG), which has been reformed to reduce costs. The new EEG has ditched automatic feed-in tariffs for all renewable power fed onto the grid, in favour of an auction system where a set volume of new onshore wind capacity is awarded to tenders offering the lowest price per kilowatt-hour.

Germany saw 10 percent more new wind power capacity go online in the first half of 2017 than over the same period last year. But industry representatives say the new system is putting the brakes on growth. They fear a slump in the sector when the first projects awarded through the auctions are slated for construction in 2019.

The biggest concern is a set of special provisions for citizens’ energy projects, which have secured the bulk of new capacity in the first two rounds of bidding.

To allow citizen-owned energy cooperatives -- key to developing Germany’s renewables sector thus far -- to compete with larger corporate and institutional bidders, the law says that citizens’ projects do not have to obtain a building license under Germany’s Immission Protection Law (BImschG) before bidding.

They also have 54 months to implement successful tenders, compared to the 30 months given to larger bidders.

But critics say these provisions are being abused. Around half of successful bids in the first two rounds of auctions are associated with a single company, project developer UKA from Saxony. UKA  says it merely provides technical and legal assistance to citizens’ projects, but critics claim it is exploiting the advantages granted to smaller bidders by setting up pseudo-citizens’ projects managed under a single umbrella.

“The auction mechanism is increasingly becoming a farce,” Stefan Gsänger of the World Wind Energy Association (WEEA) told CLEW. “Nobody is satisfied, and it has far from achieved its original aim.” 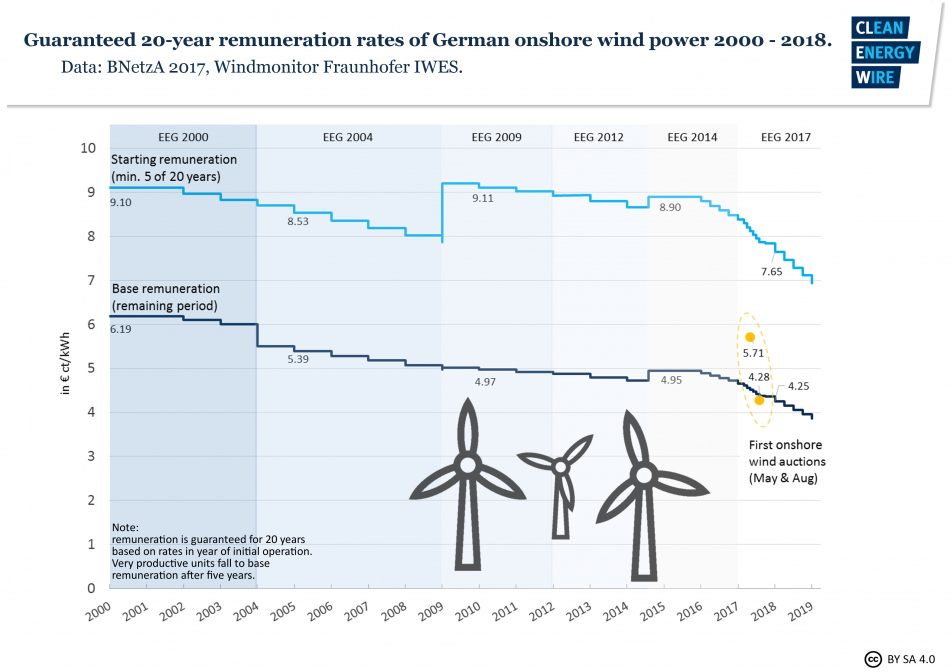 Gsänger says a lax definition of citizens’ projects has enabled larger bidders to secure a substantial chuck of the tendered volume for themselves, while no truly citizen-led initiative was granted a licence through the second auction. “There’s a great deal of frustration in the citizens’ energy scene,” Gsänger says.

The government has reacted by suspending the special provisions for cooperative for next auction, in 2018, while it investigates the issue. Gsänger called this “a panic reaction”, which shows that “the entire process was not very well thought through”. He sees little hope of the law being significantly amended before Germany’s new government takes office, following the 24 September general elections and ensuing weeks, or even months, of coalition talks.

And the rules for cooperatives are not the industry’s only concern.

Gsänger says the second auction’s average winning bid, of 4.28 eurocents per kilowatt-hour, or around 60 percent of the feed-in tariff granted in 2014, is more in line with countries with far better wind conditions.

“The bids we’ve seen come with a high degree of speculation,” Gsänger says. He argues that bidders are speculating on falling turbine prices over the four and half years they have to implement their projects, meaning it is not even clear what kind of technology they will utlimately use.

Expansion volume could drop to a quarter of 2016 level

Dirk Briese of market research company Windresearch shares the WEEA’s scepticism. “Many project developers say that implementing a wind farm at this rate is not economically viable, at least not in the short run,” he says.

Briese argues that bids like those offering zero support in Germany’s first offshore auctions earlier this year show that operators are planning to implement their projects at “the very end of the time frame”, betting on both falling turbine prices and rising electricity prices.

It’s not even clear, Briese says, that many of these projects will be granted a building license under the BImschG at all. Which could mean Germany gets far less wind power capacity than it’s banking on -- bad news for the expansion of green power, and bad news for the manufacturers that supply the technology.

According to Windresearch’s analysis, a worst-case scenario would see just 1,000 mega-watts (MW) of new capacity in 2019, compared to the 2,800 MW set by the EEG and auctioned off. That’s less than a quarter of the onshore wind power capacity added in 2016.

More realistically, Briese says, Germany can probably expect to gain 2,500 MW of new wind power capacity in 2019. And he admits that current job cuts and plant closures at important German manufacturers like Nordex or Senvion are only indirectly influenced by the auction results.

Others argue that auctioning off a set volume of new capacity is the wrong approach in any case. By setting a cap, BWE head Hermann Albers says Germany is slowing down its transition to renewable power and damaging the sector's international competitiveness. “We need a strong domestic market that secures our export success,” he told CLEW.

Still, Briese, argues the auctions’ aim of reducing costs is important, and that higher expansion targets would undermine the whole system, which should end the brokering between politicians and industry over support rates. “Now they argue over expansion volumes. That’s essentially the same,” Briese said.