Merkel’s grand coalition in review: The climate and energy record 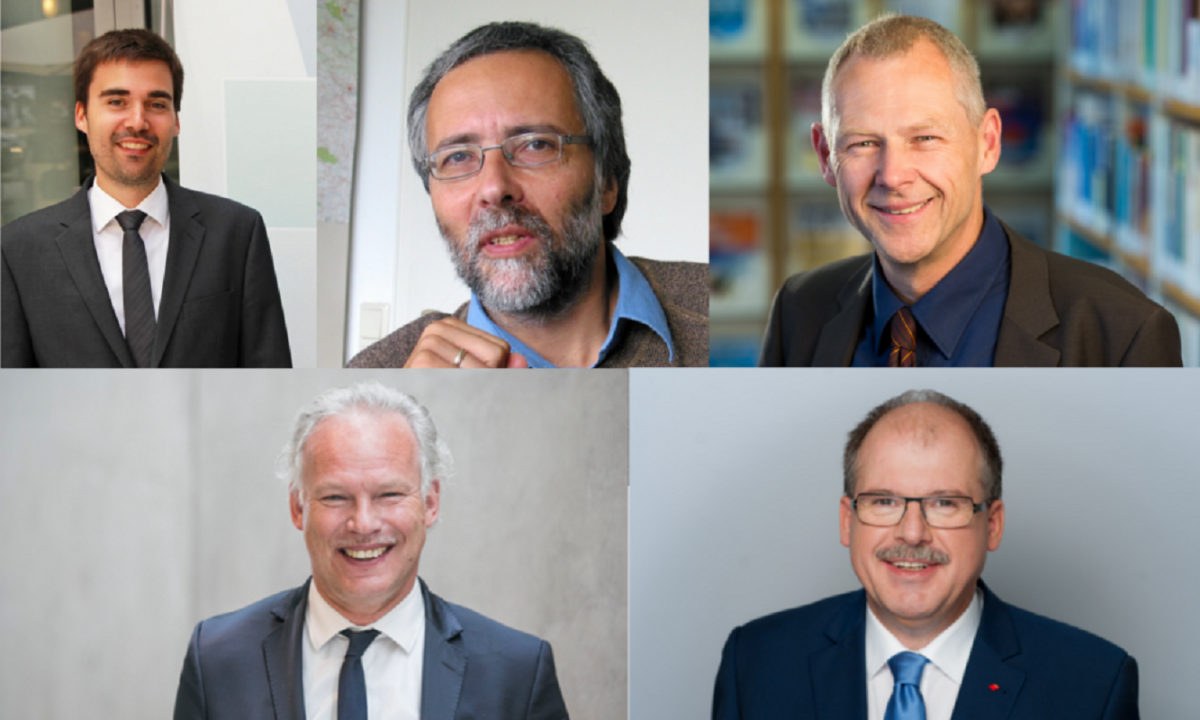 Sebastian Bolay, Christoph Bals, Manfred Fischedick, Hermann Albers, Stefan Körzell. (left to right, top, then bottom)
As the current legislative period draws to a close, The Clean Energy Wire asked key stakeholders to review the last four years of German energy and climate policy – and tell us what they would like to see from the next government.

The Energiewende has stalled in the past legislative period, particularly on CO₂ emissions. While significant progress was made in some areas – in part spurred by global developments such as the falling price of solar modules – development in other areas trails well behind targets.

Compared internationally, Germany certainly achieved a respectable CO₂-emission reduction of 27.6 percent by 2016 compared to 1990 levels. However, the gap between that and the self-imposed target of 40 percent by 2020 is too big to be closed in the remaining time.

The federal government did react to this situation in 2014 with the Climate Action Programme and more than 100 concrete measures, but they are not being implemented fast enough.

Results in the transport sector are especially disappointing, where CO₂ emissions fell just 2 percent between 1990 and 2016. The introduction and resolute implementation of a transport transition should be central to the coming legislative period, following the last four years’ focus on the power sector.

The provisions in the Climate Action Plan 2050 also confirm the need for a stronger focus on the transport sector. The emissions-reductions target of around 40 percent by 2030 is very ambitious. It will not be reached without structural changes and a rapid switch to alternative, climate-friendly drives in passenger and freight transport, as well as a massive strengthening of public transport, bicycle and pedestrian travel. It will demand a lot of courage and stamina. 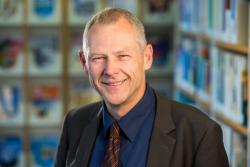 “Emissions reduction results in the transport sector are especially disappointing.”

For the first time, the Climate Action Plan 2050 prescribes clear sector targets, which is commendable. The complex and highly controversial inter-ministerial coordination following is initial draft in summer 2016 shows that not everyone seems to have understood that the federal government’s long term climate target (80 to 95 percent CO₂ emission reduction by 2050) won’t be reached easily – and not without huge efforts in all sectors.

The participatory approach that was used in developing the Climate Action Plan should in general be maintained in the coming legislative period. However, there must be more time in this process for discussion to enable a serious social dialogue. A process as complex, challenging and transformational as the energy transition needs wide support throughout society.

With this in mind, I call for more courage in the next legislative period,

In the end, I wish for the federal government to ultimately come to the right decisions in light of the complexity of the energy system, and the existing uncertainties and dynamics. Anything but a simple task.

Sebastian Bolay, Coordinator for Energy Policy at the German Chambers for Commerce and Industry (DIHK)

The grand coalition had to accomplish a mammoth task right after taking office: securing the Special Equalisation Scheme [under which electricity-intensive companies do not have to pay the full EEG surcharge or are exempt from it]. The fact that this succeeded is clearly on the plus side of its accomplishments. Losing this regulation would have severely damaged Germany as an industrial location.

Together with securing the competitiveness of large electricity consumers, the Renewable Energy Act (EEG) reform of 2014 also began to introduce auctions for renewables. The results show that auctions work. I’m sure nobody expected solar PV power for less than 6 cents per kilowatt-hour, and zero-support offshore wind bids. It’s good that the grand coalition was courageous enough to switch from price control to volume control. The economy and consumers save money – if only for the future. 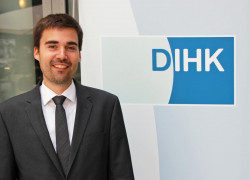 “The grand coalition secured the competitiveness of large electricity consumers.”

Now we come to the drawbacks of this government’s policy. Grid fees and levies on the power price increased further, and will continue to do so in the coming years – a disadvantage for the German economy. There’s an urgent need to act on power prices. To secure Germany’s competitiveness as a business location, DIHK recommends using financial means equivalent to power tax revenues to reduce the EEG surcharge. In addition, it is not clear what burdens could result from the Climate Action Plan 2050.

The Energiewende continues to be a top-down project. New actors and business models are initially met with scepticism. The EEG regulation on the use of power storage is symbolic for this. It is very complex. We will see if it can be widely applied in companies. The next government should find the courage to allow the market more space.

Germany’s “climate balance sheet” of the past four years is dominated by the growing gap between successful climate diplomacy on the international stage and a virtual standstill on domestic climate policy.

At the G7 summit in 2015, the federal government put the topic decarbonisation on the global agenda. Yet, in Germany, the government refuses to set clear frameworks to give up coal, combustion engines or oil- and gas-fired heating.

Internationally, the German government played a constructive role in making the Paris Agreement happen, and as president of the G20 in 2017, defended this success against the US government.

Since Paris, global energy-related emissions did not rise for the first time – they even fell in China. Yet in Germany, there has been almost no decrease since 2009. Without an emergency programme that first and foremost takes old coal power plants off the grid, the 2020 climate target of reducing emissions by 40 percent compared to 1990, will be dramatically missed. 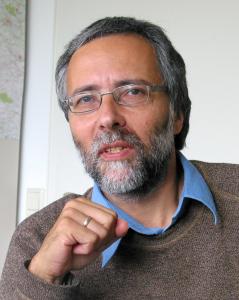 “There’s a growing gap between successful climate diplomacy on the international stage and a virtual standstill on domestic climate policy.”

Environment minister Barbara Hendricks had the courage to put steps against the climate policy standstill on the political agenda. Her most important success in domestic climate policy is the Climate Action Plan 2050, which sets out 2030 emission reduction targets for all sectors.

The next federal government must decide: Does it want to turn the implementation of the Paris Agreement into a motor for innovation in Germany? Concretely, this means accelerating the speed of climate policy four-fold, if we want to reach the 2030 climate targets.

The government coalition agreement must already set out a clear framework for the implementation of the Climate Action Plan 2050: for a fast coal exit, and for a serious transport and heating transition. The new government must announce a clear decision on a coal exit early on. In addition, Germany needs a transport transition master plan. An important framework would be a floor price for CO₂ emissions that Germany could push for together with France.

Stefan Körzell, member of the National Executive Board at the German Trade Union Association (DGB)

The federal government had a lot of catching up to do on energy policy in this legislative period. That’s because the previous governing conservative-liberal coalition [CDU/CSU, FDP] with its zig-zag course in this field had left behind a mess that had to be cleaned up. The exit and (re-)entry of the nuclear phase-out, an unpredictable renewables support policy, and an energy and climate fund with uncertain funding are just three examples of such misguided policy.

The current grand coalition, on the other hand, has shown commitment and partly tidied up the Energiewende. It has reformed the Renewable Energy Act (EEG) and had to convince the European Commission more than once that this was in line with EU state-aid regulations. This was also the case with combined heat and power support and exemptions for energy-intensive industry, which continue to be necessary.

Unfortunately, this federal government also rushed too quickly into decisions that were meant to help the country reach its 2020 climate targets. This included the proposal to introduce a climate levy for power plants, which led to much uncertainty among the plants’ employees. In the end, its decision to establish a capacity reserve made more sense.

In future, the government must ensure early on that it introduces policies with which climate targets can be reached and supply security and fairer structural development made possible, without endangering Germany as a location for industry. 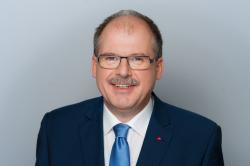 “The current grand coalition has shown commitment and partly tidied up the Energiewende.”

In addition, the federal government has started a broad stakeholder dialogue in almost all areas. This led to many plans with far-reaching goals in climate protection, energy efficiency, power market design, energy-focused building retrofitting, and innovation.

It’s commendable that relevant actors from energy and climate policy were involved. However, these consultations seldom led to concrete measures, and the federal government often stayed in an “announcement mode”.

The most far-reaching result – the Climate Action Plan 2050 – has defined ambitious greenhouse gas emission reduction sector targets for the first time. According to the plan, industry must reduce emissions by 49 to 51 percent, and the transport sector 40 to 42 percent, compared to 1990. The next federal government will have to see to what extent these targets can be reached without social or economic upheaval.

Another construction site in energy and climate policy that the next government must address is a fairer financing of the energy transition, for example via tax revenues. In addition, the government must promote fair structural development of industries and regions, and support innovation for a modern energy supply. With this in mind, the DGB will continue to work for the interests of employees.

All energy industry actors are ready to face the challenges of the energy transition. It has been proven that costs of wind and solar are lower than those of conventional power plants. It’s regrettable that the federal government is nonetheless stepping on the brake, to slow down the Energiewende. As a result, the discrepancy between German energy policy and international agreements from Paris, Marrakesh and the Hamburg G20 summit increases significantly.

We are seeing that the coalition government has torn holes in the security net of the Renewable Energies Act (EEG). This net provided the solid foundation for the construction of a productive German wind industry, a global leader. In Germany, we have secured almost 150,000 jobs in the sector. And the world market continues to grow. Prospects for German companies are outstanding, if the federal government can find the strength for a real strategy for the industry. 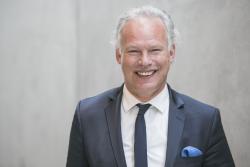 “It’s regrettable that the federal government is stepping on the brake to slow down the Energiewende.”

At the joint sector conference of BWE, IG Metall and VDMA in May, we drafted a position paper to explain where action is now needed:

The coming four to five years are going to be decisive for the energy industry. Investments that make the Energiewende possible must not be questioned. We need accelerated continuity.