Factsheet
Germany’s shift to a renewable energy future requires massive investments into the country’s power network. The costs are borne by consumers, who pay a grid fee included in their power bills. A rapid rise of these network usage charges in recent years has sparked a controversy over the methods used to calculate the costs, and their distribution. (UPDATE with government reform proposal)

Grid fees already make up around a quarter of a household’s electricity bill [For details, see the Factsheet What German households pay for power]. At a cost of more than seven cents per kilowatt hour on average, they top the renewables surcharge consumers pay to finance the roll-out of green energy. 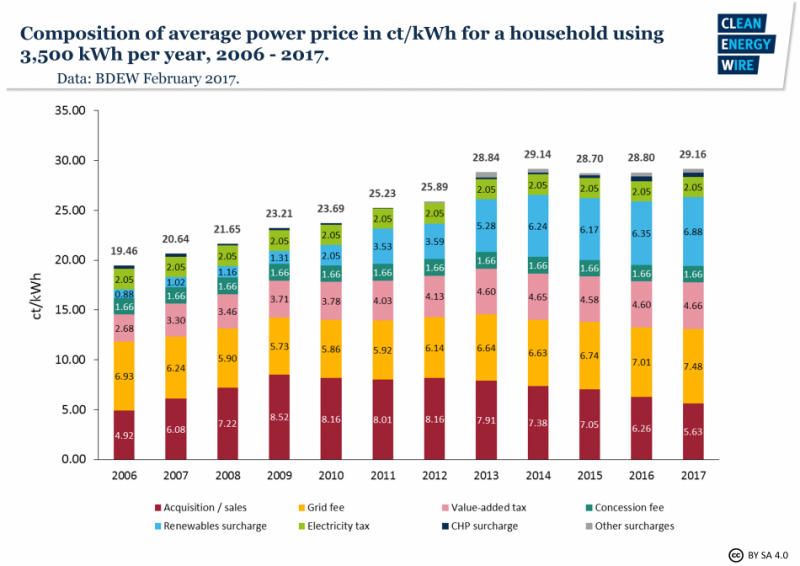 Network charges are expected to rise further in the coming years, due in large part to the huge investments needed to make Germany’s power grid fit for a future energy system characterised by an increasing share of fluctuating renewable power. Fees were expected to rise around ten percent on average at the start of 2017.

Investments in transmission and distribution grids alone rose from 3.8 billion euros in 2011 to about 6 billion in 2015. Many more billions of euros are earmarked for spending on offshore wind park connections in the Baltic Sea and the North Sea. Huge funds will also be needed to build new electricity superhighways to transport wind power from the breezy north of the country to the industrial and power-hungry south.

The total costs of future grid extensions are currently hard to gauge, according to the Federal Network Agency (Bundesetzagentur). Provisional estimates suggest 18 billion euros will be spent on overland extensions and 15 billion euros for offshore projects by 2024. But plans to use underground cables will cause additional costs, the agency warns.

Total grid fees amounted to more than 17 billion euros a few years ago, and are likely to have risen to around 20 billion euros by now - but recent data is not available, grid expert Andreas Jahn from the Regulatory Assistance Project (RAP) told the Clean Energy Wire.

The rising share of renewable power – currently around a third of consumption – has already revealed the weaknesses of a power grid originally designed for an electricity system with a steady flow of electricity from large conventional power plants. Network operators need to intervene constantly to match supply and demand to keep the grid stable, resulting in extra costs which are also part of the grid fees paid by consumers [Find more details in the CLEW factsheet Re-dispatch costs in the German power grid].

Despite the rising number of measures to stabilise the grid, Germany’s power network remains one of the most reliable in the world [For details, read the CLEW factsheet Germany’s electricity grid stable amid energy transition].

The rapid rise of power prices in general, and of grid fees in particular, have led to a growing demand for a reform of the grid fee system. Critics say the current mechanism is unfair for three reasons:

Firstly, energy-intensive industries are exempt from the charge, increasing costs for all other consumers. Industry rebates top one billion euros in 2017. This means the surcharge added to consumer power bills to finance the rebates rises from 0.378 to 0.388 cents per kilowatt-hour (ct/kWh) – affecting both households and those businesses without exemptions. The Grid Agency says industry rebates are on the rise because both grid fees and the number of companies with exemptions went up. Critics such as Green politician Bärbel Höhn say the number of companies exempt from the surcharge – which currently stands at around 5,000 – rises each year because businesses use “creative processes” to be included.

Secondly, grid fees vary strongly across the country. The charges in expensive regions are more than twice as high as in the cheapest regions. They are especially dear in rural areas in the east of the country because costs are distributed among a sparse population. Large additions of renewable power in these regions also require grid extensions and investments (see graphic). Regional differences are on the rise: Prominent grid operator TenneT – which serves many rural areas from the north to the south of the country - planned to raise its grid fees by 80 percent in 2017.

As a result, only a small percentage of the power bill comes from grid fees in some regions, while they constitute almost half the total in others. An average family in northern Brandenburg pays grid fees of 416 euros for an annual power consumption of 3,500 kWh, while the average family in Bremen pays 196 euros for the same amount of power. For large-scale consumers, the price differences become even more evident: a bakery in Bremen with an annual power consumption of 80,000 kWh pays 2,942 euros, while a bakery in northern Brandenburg is charged 7,974 euros, according to calculations by Agora Energiewende. A grid fee reform proposal approved by government cabinet in January 2017 did not envisage to align grid fees across Germany, contrary to earlier press reports and despite pressure to do so.

Thirdly, the current system allows grid operators to charge large profits, according to critics.  Complex regulation is required to balance the interests of grid operators and power consumers because electricity grids are a monopoly business without competition to drive costs down. The Grid Agency approves the fees charged by network operators, but critics complain the system is not transparent, and offers operators far too much leeway to overcharge consumers.

In 2019, the Federal Network Agency will put a tighter limit on the profits grid operators are allowed to make. But there is no transparency on the real infrastructure costs, and the profits operators charge consumers, according to an analysis by energy think-tank Agora Energiewende. 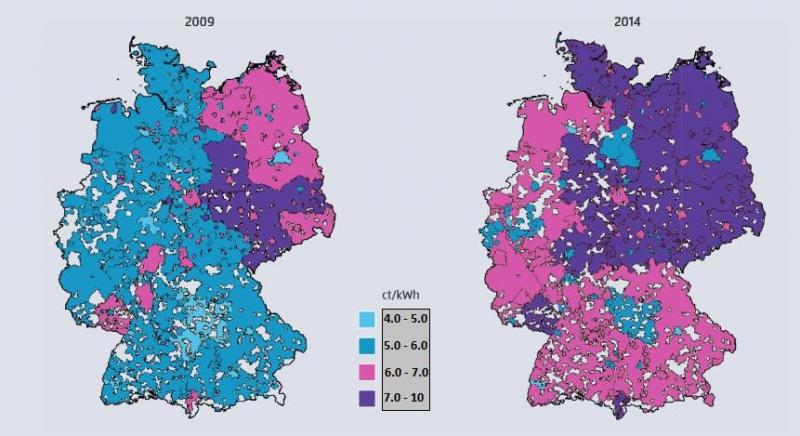