Factsheet
Rising re-dispatch costs for grid stabilisation have become a new point of concern in Germany's Energiewende, the transition from fossil and nuclear to renewable energy sources. This factsheet explains why they occur, who pays, and what solutions have been put forward to avoid these costs. 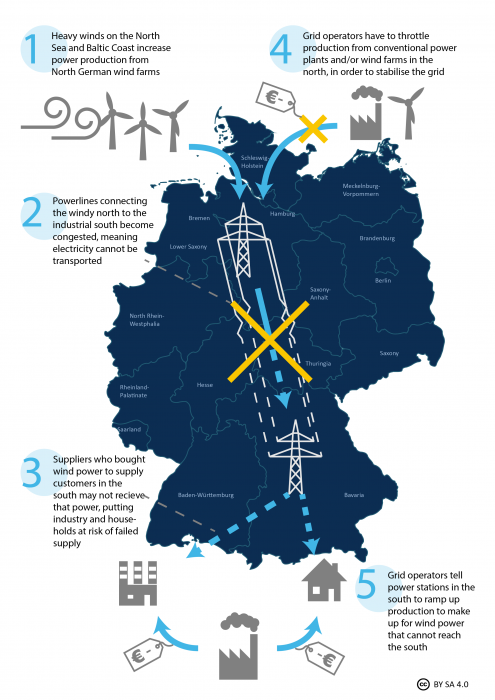 Germany’s power system is increasingly based on fluctuating renewable energy sources, and that’s creating challenges for the country’s grid operators. In the old days, conventional power was supplied to meet demand. Now, a change of weather can result in a sudden influx of electricity. Operators have to work hard to keep the grid stable, through “re-dispatch” measures that ensure a balance between supply and demand.

The easiest way to illustrate this is with what happens on very stormy days in north Germany.

Germany’s energy transition is taking wind power production to new record highs. In 2015, the share of wind in total Germany’s total energy consumption rose by 50 percent. Onshore wind capacity expanded by 3.3 GW, and offshore capacity by 2.2 GW during that time. In February 2016, wind farms generated an unprecedented 33 gigawatts (GW) of electricity on a single day.

All that additional power has to go somewhere – and often its needed most in Germany's industrial south. On particularly windy days when demand in the north is low, this means renewable electricity fed into the grid exceeds the capacity of the power lines that are supposed to transport electricity to the south of the country. A kind of congestion occurs, forcing grid operators to take re-dispatch measures in order to stabilise the network.

For a power network to remain stable, the amount of electricity fed into the grid must equal that being drawn out of it, at any point in time. This is normally achieved through the power market, with power plant operators producing enough electricity to meet demand – i.e. supplying what has already been sold on the exchange (See CLEW factsheet merit order effect). Grid operators receive a power plant “dispatch” list, based on the market figures a day ahead, allowing them to check whether adjustments are needed to ensure the network runs smoothly.

If on a stormy day the north-south power lines are too congested to deliver wind power that has been bought in the south, grid operators can resort to three different types of re-dispatch measure:

All of these re-dispatch measures result in extra costs for consumers:

In 2015, re-dispatch measures in Germany cost an estimated 402.5 million euros, according to transmission grid operators' estimates. Jochen Homann, president of the Federal Network Agency, has warned the annual figure could rise to 1 billion euros by 2020.

Re-dispatch costs are passed on to consumers as part of the grid fee households pay via their electricity bills.

Despite the frequent need for grid stabilising measures, the German power grid is one of the most reliable in Europe. The average consumer faces power outages of around 12 minutes per year, most of which have nothing to do with the feed-in of renewables (See a factsheet on grid stability here.)

Some researchers argue that new north-south connections would never have enough capacity to absorb the growing wind power generation in the north and the decreasing conventional capacity in the south – where many nuclear power plants will go offline in the next seven years. They argue for measures such as a more decentralised power supply, power storage, demand-side flexibility, or even splitting the German power market into two different price zones.

See a CLEW dossier on the German power grid here.

See a CLEW article on loop-flows around the German grid here.