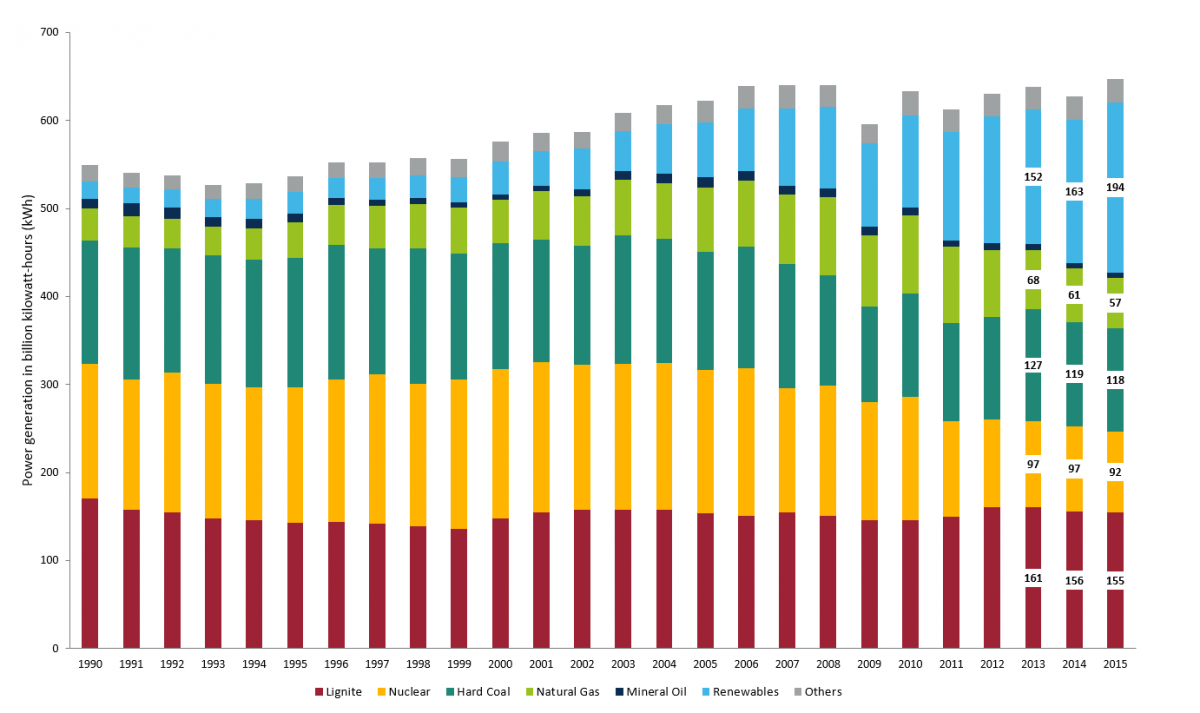 Power generation in Germany rose to its highest level since reunification in 2015 - Renewables contributed the largest share. Data: AGEB, 2015.
Germany’s CO2 emissions have inched up in 2015 despite a rapidly increasing share of renewables in electricity production, according to first calculations by energy market research group AG Energiebilanzen. The main cause for the year-on-year rise were cooler temperatures compared to 2014. The rise frustrates hopes Germany’s Energiewende has already put the country's emissions on a faster downward trend. Because Germany’s own ambitious climate targets for 2020 are already in danger, the new figures put pressure on the government to follow-through with its near-term climate action plan.

The researchers did not give a specific figure for total CO2 emissions or a sectoral break-down, but said they "anticipate only a slight increase when compared to the previous year." The first detailed emissions estimate will be published early next year by the Federal Environment Agency (UBA). Adjusted for changing temperatures, CO2 emissions are about 2 percent below 2014 levels, according to the AGEB press release.

Advances in energy efficiency and a growing share of renewables prevented a sharper increase in emissions, which were driven up by economic growth and a surge in population caused by the influx of refugees. Total energy consumption rose 1.3 percent in 2015, primarily due to the weather, according to AGEB. “The increase in consumption resulting from the positive economic trend (+ 1.8 percent) and the growth in population (+ 1 million people) was compensated by gains in energy efficiency." 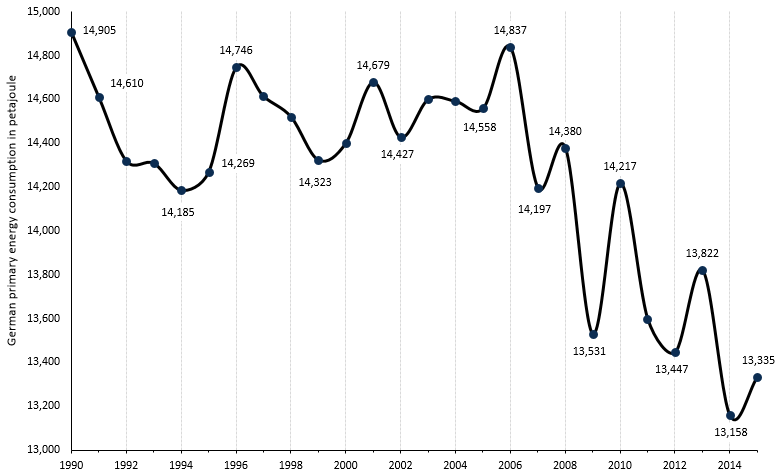 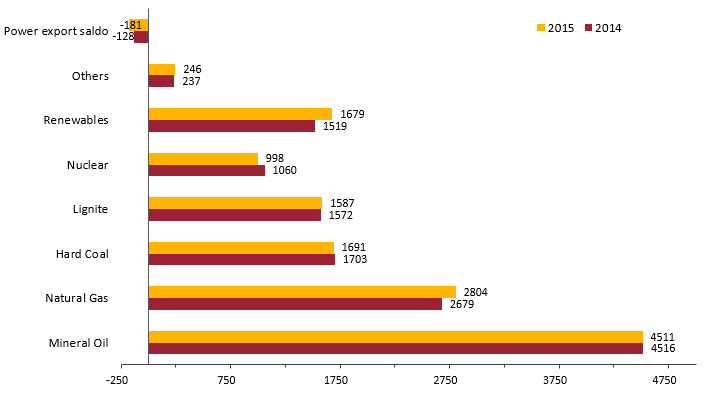 "It was possible to cover a substantial portion of the increase in consumption with renewables and, thus, without any higher emissions,” the AGEB said. Renewables' share in total electricity generation rose to 30 percent, compared to 25.9 percent in 2014. The increase consolidates renewables’ position as Germany’s most important electricity source – if hard coal and lignite are counted separately. Power generation rose to its highest level since reunification. 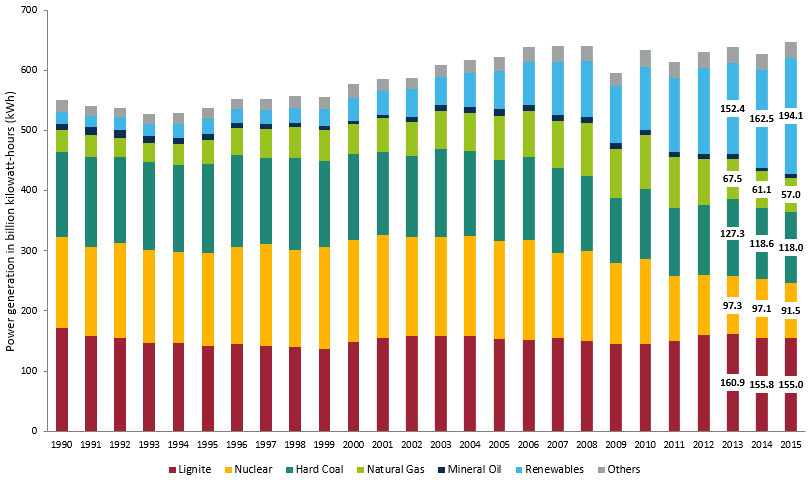 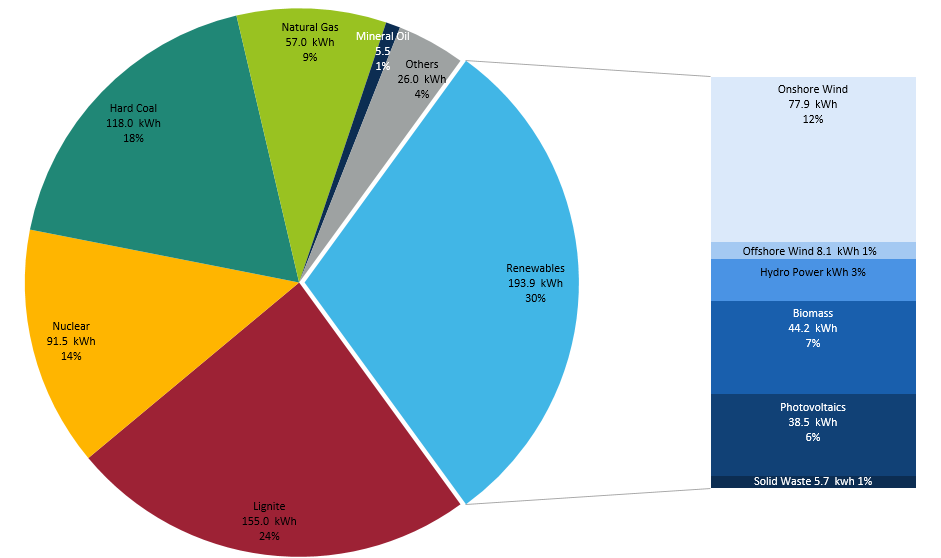 Power exports shot up more than 40 percent, according to the AGEB data. This means Germany exported almost as much electricity as it generated using natural gas. 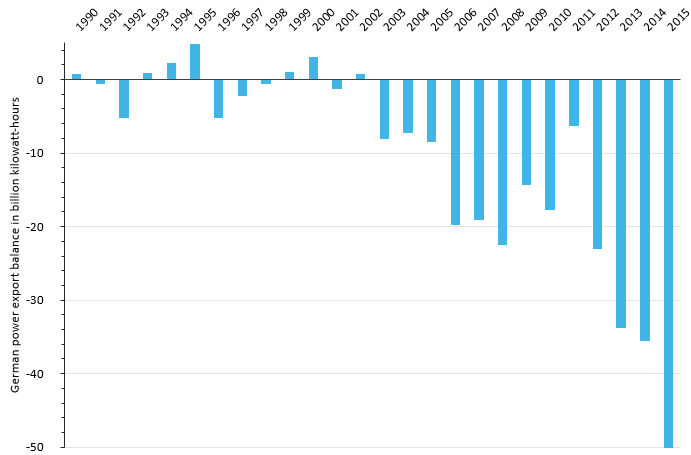 Unadjusted emissions had fallen more than four percent in 2014, bolstering hopes that Germany’s renewable energy transition was fast enough to bring down emissions quickly. But the recent increase means German emissions have essentially remained flat since 2009.

The share of renewables in total energy consumption rose to 12.6 percent from 11.5 percent in 2014 – an increase of eleven percent. “Wind power on land and off shore showed a plus of 50 percent compared to the previous year. The share of solar energy (photovoltaics and solar thermal energy) increased by 6 percent," the AGEB press release said. 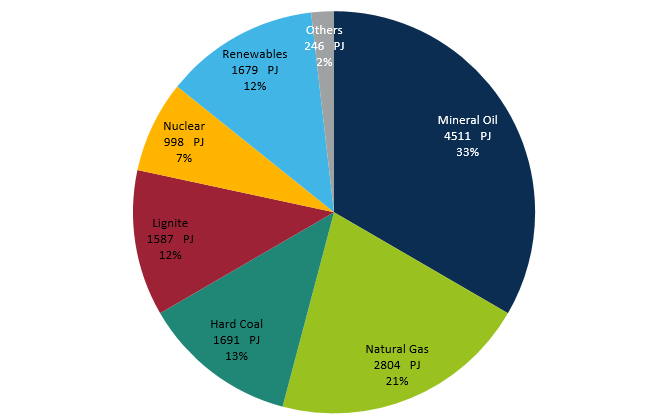 According to the AGEB figures, hard coal consumption dropped by 0.7 percent, but lignite use ticked up when compared to 2014.

Because lignite is the main culprit of high emissions in Germany’s power sector, endangering the country’s climate targets, the German government decided this year to mothball the oldest and dirtiest lignite plants, starting in 2016, as part of a climate action programme presented in late 2014. Germany aims to cut greenhouse gas emissions to 40 percent below 1990 levels by 2020. These targets are also in peril because progress in other areas of Germany's transition to a renewable and nuclear-free energy future has been slow - especially in transport and efficiency.

In mid-2016, the government wants to present a “Climate Action Plan” to specify its long-term target to reduce CO2 emissions by 80 to 95 percent by 2050. The idea of such a plan is contested by industry groups. But environmentalists say they are essential to start a serious debate about a coal exit in Germany, which many observers say is necessary to keep long-term targets within reach.

Mineral oil consumption remained virtually unchanged in 2015, while natural gas consumption went up by 5 percent. Nuclear energy fell six percent, due to the decommissioning of a power plant in mid-year. 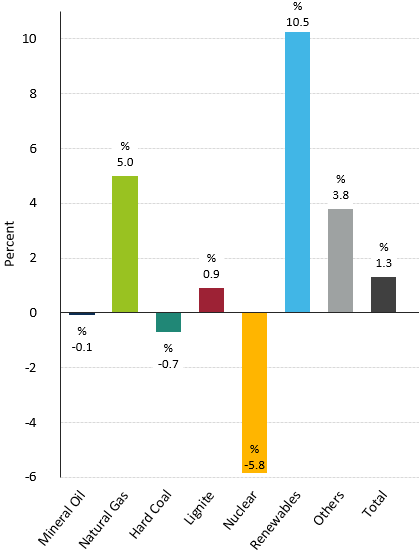