Factsheet
Combined heat and power has become one of the hotly debated issues of the 2015 power market reform, with the government wanting to reduce support costs and utilities worried that these efficient plants will become unprofitable. This factsheet explains what role combined heat and power plants (CHP) play in the German electricity system and the energy transition and what changes in the law governing the support for CHP has in store.

Combined heat and power stations (CHP) (in German: Kraft-Wärme-Kopplung or KWK) are thermal power plants that produce both electricity and heat. Depending on the type of plant, capturing heat that  comes from generating power  makes these power stations highly efficient – they can utilise up to 90 percent of the primary energy they consume (Figure 1). Apart from biogenic CHP, which use biomass and biogas, the heat-and-electricity-producing plants are largely fed with fossil fuels. These produce carbon emissions, so CHP is not a source of renewable energy. But because of its high efficiency potential and because CHP uses less fuel and produces fewer CO2 emissions than comparable power-only plants, the German government has included KWK in its plans for decarbonising the power sector. 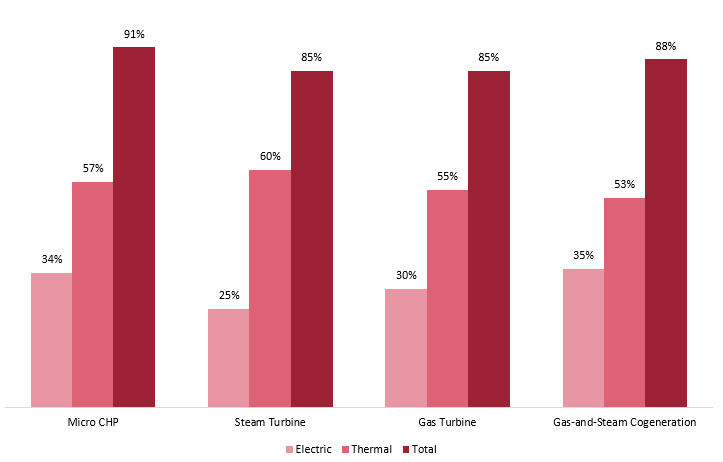 There are many different kinds of CHP plants. These include steam turbines, gas turbines, a combination of the two, or fuel cells. Many biogas plants are equipped with heat recovery systems that use the heat they produce in their own operations or in nearby farm units or households. Some CHP facilities provide heat for only one company or industrial operation, others feed into a large district heating network that provides heating for whole towns (general supply). CHP plants make most sense when there is an evenly high, year-round demand for heat.

Single households or large apartment buildings can install so-called micro-CHP plants (in German: BHKW) that produce power in a gas-fired engine or gas turbine. These use the heat generated by combustion to heat the building.

The usage of heat storage and power-to-heat can increase the flexibility and cost-effectiveness of CHP. Several municipal utilities that run local power stations and district heating networks, have invested in such large immersion heaters in recent years. The giant water tanks serve as thermal storage facilities. The idea is, that cheap excess power from the grid or the local power station can be  used to heat the water in the tank, which feeds the local heating network. 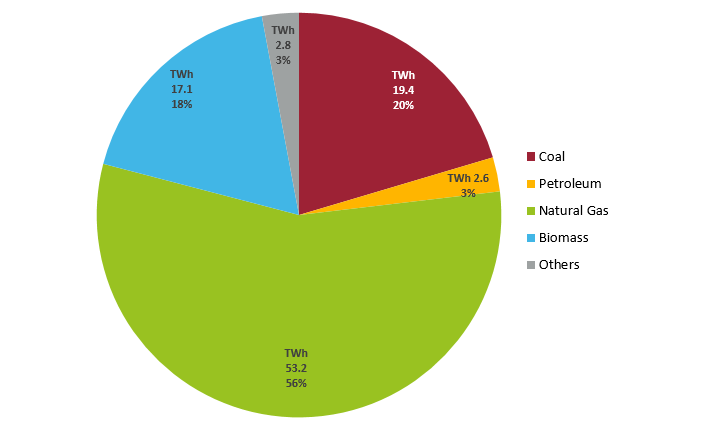 The installed capacity of CHP amounts to 30 gigawatts.

Industrial companies produce one third of all installed CHP generation in Germany. Over half the CHP power comes from general supply stations operated by local utilities, while the remaining share is made up of biogenic and small, decentralised facilities (See Figure 3). 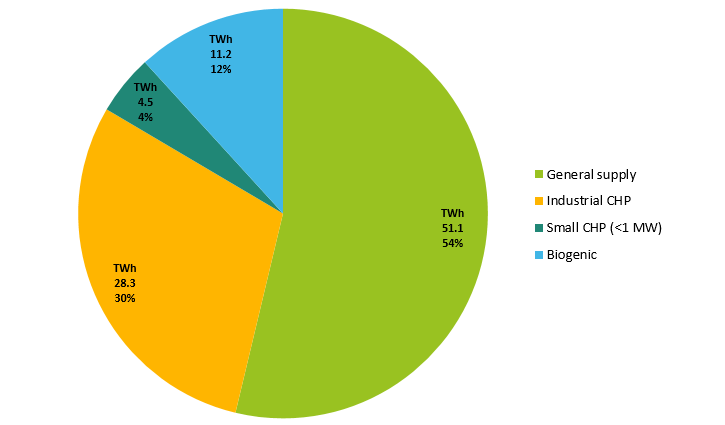 The increase in CHP electricity production has been due in particular to the growth of gas-steam cogeneration plants and to the construction of more biogas plants and small fossil-fuelled block-unit heating power engines (BHKW) and micro CHPs (See Figure 4).

Researchers from Prognos et al. predict a further increase of up to 300 MW CHP capacity per year until 2020. 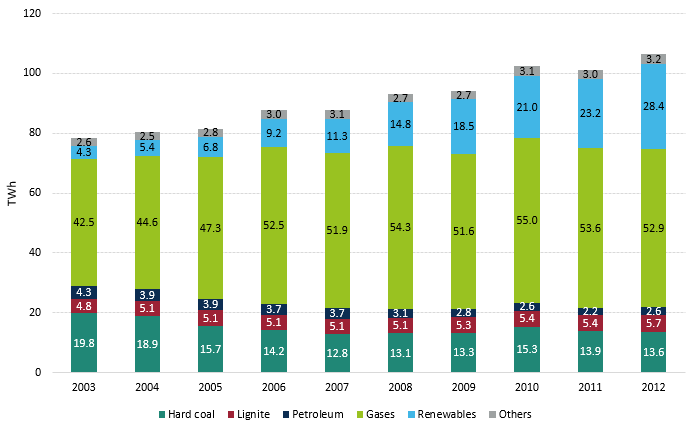 Targets for CHP in Germany

In 2012, CHP already helped save 40-56 million tonnes of CO2, compared to what would have been emitted by non-coupled power and heat generation from fossil fuels.

By 2020, 25 percent of thermal power generation should come from combined heat and power stations, a March 2015 paper by the Ministry for Economic Affairs and Energy (BMWi) proposes. This is an adjustment of its earlier target of a 25 percent share of CHP in gross power production by 2020. “Because of the increasing share of power generation from renewable sources, it doesn’t make sense to apply the 25 percent share of CHP to total power production,” the ministry document says.

Like renewable energies, a surcharge on all consumers’ power bills helps pay for expanding CHP. The so called KWK surcharge was 0,178 ct/kWh in 2014 for consumers who weren’t eligible for special exemptions.

Since 2009, CHP operators receive support of 5.41 ct/kWh for small installations, decreasing according to the size of the plant to 1.8 ct/kWh for the largest kind. Biogenic CHP is supported with feed-in tariffs stipulated in the Renewable Energy Sources Act (EEG).

Other benefits for micro CHP and industrial CHP include exemptions from paying grid fees, the EEG surcharge and other levies and taxes on the power price. A recent study by LBD Beratungsgesellschaft calculated that 2.1 billion euros of this indirect support to small and industrial CHP is awarded every year.

Because of decreasing power prices and shorter operating hours, managers of municipal utilities in German towns and cities paint a bleak – almost futile – picture of the current and future state of CHP and district heating if support isn’t stepped up soon. Many utilities that have invested in gas-fired CHP cannot operate them without a loss at the moment, the Association of Local Utilties (VKU) says. Research by Agora Energiewende and LBD Beratungsgesellschaft confirm this. Because of the very low wholesale price for power and increasing production from renewable sources like wind and photovoltaics, only coal-fired CHP stations are able to earn money, while modern gas-steam cogeneration plants operate at a loss. Many utilities that operate gas-fired CHP will soon have to make a decision on whether to keep their units running next winter, the VKU has said.

An analysis by Agora Energiewende* and LBD from April 2015 concluded that continued operating of CHP and future investment depended mainly on how much own-consumption was possible and how many levies and taxes operators’ could avoid. Neither price signals on the market nor emissions savings were among the incentives for CHP anymore. The researchers suggest that the 25 percent target for CHP should be eliminated and the support regime should be adapted to promote flexibility and greenhouse gas reductions from the CHP sector. If CHP were to have a place in the future’s almost 100-percent renewable power sector, it would have to become flexible enough to facilitate a system dominated by fluctuating power from wind and solar. This would particularly require more thermal storage, the researchers say.

CHP is one of the areas the government has highlighted in its National Action Plan (NAPE) for cutting CO2 emissions, because of its high efficiency potential. In order to keep CHP in the mix and reach the targets, the government will therefore reform the CHP law (KWKG) in 2015. According to the BMWi’s suggestions from March this will include:

Utility association VKU demands that support of existing CHP plants should not depend on their size.  It also criticises the 2019 deadline and the annual support cap but welcomes the extra support for heating networks and storage.

*Agora Energiewende  and the Clean Energy Wire are both joint initiatives of  the Stiftung Mercator and the European Climate Foundation.