Factsheet
Commercial wind power production requires thorough planning and preparation. Project developers have to include geographical, technological, legal and social aspects in their calculation to conclude whether a wind farm at a given location can be run at a profit – a process that can take more than five years. Due to the technology’s comparatively long history in Germany, there exists a wealth of regulations and formalities project developers have to heed when planning a wind park. This factsheets provides a guide through the different stages of implementation.

“Wind turbine locations are a scarce good,” says Andreas Ehrenhofer of Teut Engineers, a small project development company from Berlin. Distance requirements in Germany vary from one federal state to another but in general they have become more restrictive in recent years, shrinking the remaining area available for turbines. According to the Renewable Energy Agency (AEE), most federal states assign about two percent of their territory to wind power development, though these areas are not necessarily the most productive. 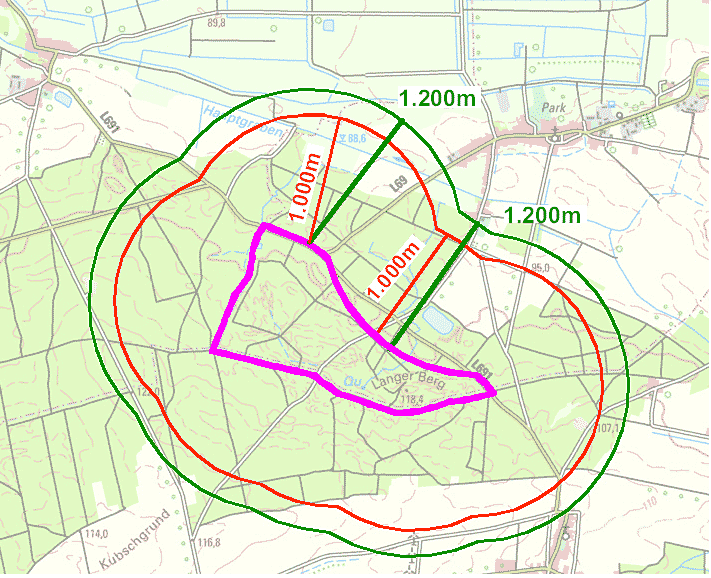 Germany’s Immission Protection Law (BImschG), the main legal text for the planning stage, stipulates a distance of at least 600 metres to the next building. But a court ruling in the southern state of Bavaria in 2016 greenlighted the so-called 10H-rule, allowing authorities to set the minimum distance at ten times the turbine’s height. With modern installations measuring up to 200 metres from the bottom to the rotor blade’s tip, the law prescribes a two-kilometre perimeter free from houses around the turbine.  Critics argue the law reduces the residual area for wind power in Bavaria to 0.05 percent of the territory.

Once potential locations have been identified on land development plans, project developers in the scouting stage also have to account for infrastructure conditions and determine whether connecting the location to the road and transmission line networks is economically feasible. Additionally, they have to make sure no endangered species in the area are threatened by the installations and check whether nearby military facilities, airports or historical monuments may obstruct implementation, the German Wind Industry Association (BWE) explains.

After a potential location has been identified, project developers turn to the crucial task of measuring its potential wind yield, a procedure called “micrositing”.

Apart from the meteorological data on the average wind speeds at a given location, the wind analysis aims to gauge topographical features that determine the area’s surface roughness and, consequently, wind strength and steadiness. Besides the area’s surface shape, individual obstacles such as trees, buildings or already existing wind power plants have to be carefully integrated in calculations.

Project developers have to decide on the instruments used for evaluation, such as anemometers and meteorological data, and whether already available information on the site are reliable or require further examination, according to the BWE. Since a doubling of the wind’s speed equals an eightfold increase in available wind power, an accurate assessment over several months and in relation to previous years is decisive for the project’s long-term profitability.

The production estimate is further refined in wind park’s layout by calculating the interaction effects of turbines on the energy yield and optimising their arrangement. Further aspects include possible costs that may accrue from constructing access ways for service vehicles.

“This assessment may take between two and three years,” says Kerstin Mann of project developer VSB. Obtaining the construction license takes another two to three years whereas construction can be done in well under one year, she explains. “Depending on the location’s complexity and infrastructure requirements, the entire process takes somewhere between five to seven years.”

Developers also have to check for available network connection lines and other infrastructure, which can be calculated using specialised software programmes. They need to research the distance to the nearest feeding point as well as the grid’s stress level. If the park’s planned capacity is large enough, building a proper transformation substation might be the best option. Grid operators provide a compulsory network connection point and planners have to ensure legal and physical requirements are met in order to link the turbines to the grid.

The next step for implementation is to ensure the location’s compatibility with immission law regulations, which all turbines taller than 50 metres have to abide by. Developers have to accurately outline the wind farm’s technological parameters, meaning the size, type and number of turbines they intend to build. “The wind farm’s exact details have to be submitted before the immission law procedure starts,” Mann says.

“The final product has to be 100 percent clarified before construction starts,” she explains. Every turbine needs individual licensing; wholesale licenses for wind farms are not issued, according to the BWE. The BImschG certificate requires surveying the planned installations’ sound emissions, rotating shadow cast, visibility and impact on the natural landscape. It also demands a species protection study, which typically monitors wildlife and vegetation over a one-year cycle.

In some cases, authorities also demand a detailed analysis of the location’s soil and potential turbulence caused by the turbine. The requirements become stricter the more turbines are included. The German administration court has defined “wind farms” as turbine clusters comprising at least 20 turbines that interact as an operative unit.

If this threshold is attained, an environmental impact assessment and formal public consultation become mandatory for obtaining the license. The detailed application has to be publicly displayed for a month. Citizens have the right to hand in written objections to the project in this phase.

“Possibilities to go to court have become greater for individual citizens,” Kerstin Mann explains. She says initiatives against wind power are on the rise even in regions where construction used to be more accepted. “Maybe this sort of resistance is a general societal phenomenon. It just affects us more than others.”

Project developers also have to take into account land tenure on site, possibly making lease contracts or at least tentative agreements with land owners during this stage - without being certain whether the wind park will actually be built. If project developers fulfil all formal requirements and there are no public objections, they are legally entitled to obtain the license. 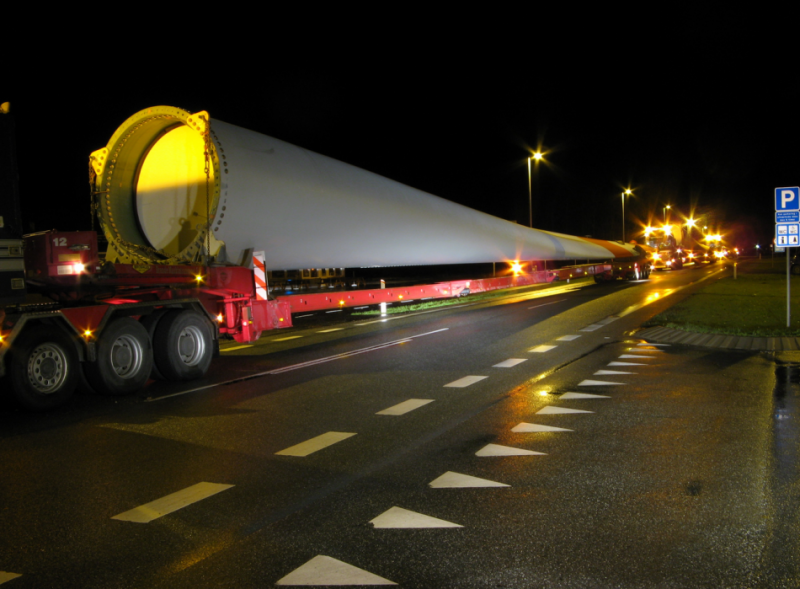 Once the project has been given a license and can be connected to the grid, developers have to ensure that it receives sufficient funding. Banks that finance wind power projects rely on the previous wind analyses to calculate expected earnings and the specifications of costs required for infrastructure constructions. The more thoroughly these criteria have been dealt with at earlier stages, the quicker banks will fund the project.

Project developers have to provide evidence that the installation will run unobstructed for at least 20 years and give their creditors details on the used technology to estimate possible outages and maintenance costs. “Most turbine manufacturers guarantee an operational availability of 98 percent. Banks usually demand this as a security,” says manager Ehrenhofer from Teut Engineers.

Since many projects never even make it past the licensing stage, developers have to rely on hybrid costing, Ehrenhofer explains. “Compared to conventional power plants, our profits are peanuts,” he says, making an accurate cost assessment even more important to obtain the 3 to 5 million euros necessary for every installation, depending on its size and capacity.

Part of the cost calculation also includes the business tax payable to the host municipality as well as rent payments to individual land owners. However, business taxes only become due after loans have been paid back. According to the BWE, wind farms become profitable after 8 to 10 years of operation; loans are on average paid off after 16 years. Land owners either receive a fixed or variable lease rate. “Often they get a mixture of both,” VSB manager Kerstin Mann says. 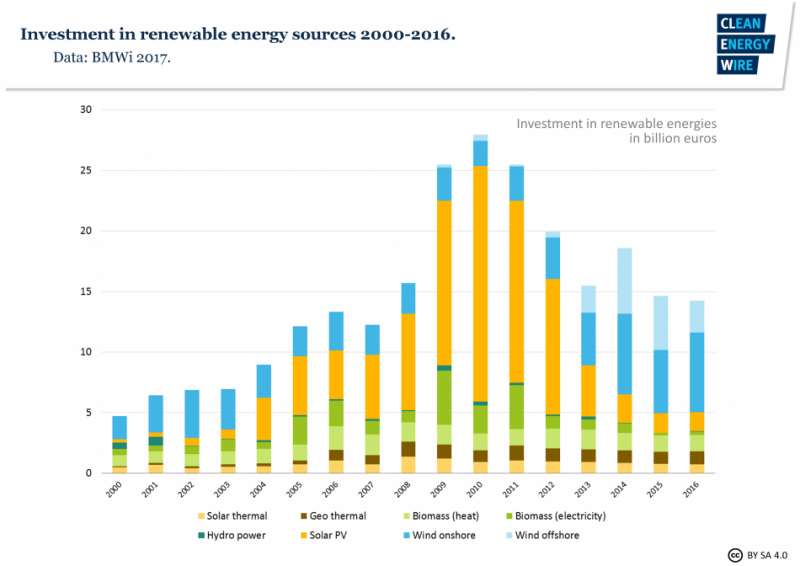 With the financing secured, project developers can turn to the last step in the implementation procedure and start actual turbine construction, which is usually done in direct cooperation with turbine manufacturers. Planners act as construction promoters, devising a time schedule and targets for every stage of construction.

This includes planning the logistics for getting the turbines’ components to the site - with the massive rotor blades reaching lengths of up to 70 metres, this can be a difficult task. Building the tower, on the other hand, is far less complicated. Once the soil has been compressed and the basement laid, there are two options for the tower itself: either concrete or steel. Many wind turbines consist of a mixture of the two.

While hardening and bracing the concrete may take several weeks, steel segments can be mounted with a crane within a couple of hours. Also the turbine’s nacelle and the rotor blades are set up with a crane. With the nacelle weighing over 200 tonnes and needing to be lifted up 160 metres, the construction cranes “are operating on the fringes of what is currently technologically possible," the BWE says.

Finally, engineers install the control unit, computer hardware, cables and the turbine’s elevator while concurrently building the grid linkage to the feeding point. After a trial phase and inspection by authorities, the turbine is ready for operation.

“We start looking for an investor as soon as construction starts,” Mann explains. This takes about three months on average. “Usually, we hand the turbine over turn-key,” she adds. Investors are then able to take over as soon as feed-in starts.