Factsheet
Having a "net zero" target or launching a "climate neutral" product is the new normal for companies. But these claims are difficult to verify, and mostly don't add up when checked carefully. In the worst cases, they are pure greenwashing – misleading consumers and investors by hiding continued emissions. Evaluating corporate climate claims requires venturing into the depth of complex greenhouse gas accounting, and cutting through confusing jargon. This factsheet explains the basics for making sense of different types of climate pledges, deciding which emissions count, and the trouble with making climate sins disappear by paying others to do the emission cuts.

*** Please note: This factsheet is one part of the CLEW focus on company climate claims. This dossier lists our existing publications and future content plans. Other journalists can also get involved - Find out more here. Our upcoming events are here. This blog explains why we decided to launch the project ***

The pitfalls of company climate targets

The Paris Agreement in 2015 set a global warming limit and forced signatory countries to provide national climate action targets and plans. This watershed moment also set in motion a rapidly growing wave of company climate pledges. More and more firms are setting themselves emission reduction targets, often choosing a year when they want to achieve “net-zero” emissions, or label certain products as being “CO2 neutral”. But these corporate climate claims are beset by a long list of pitfalls, which include:

This graph from the NewClimate Institute & Data-Driven EnviroLab illustrates the nuances of company climate claims: 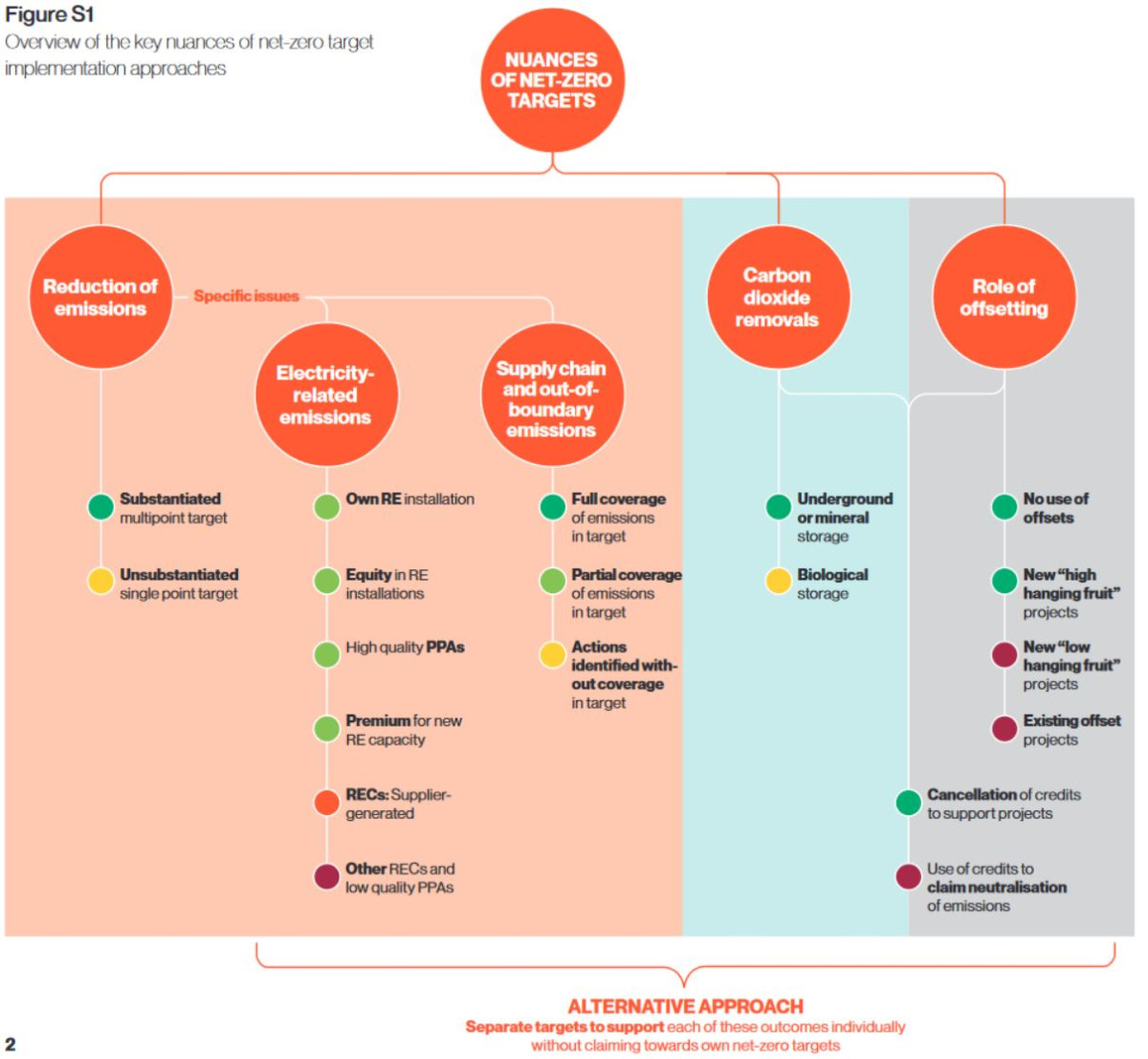 “Net-zero”…”carbon neutral”… What does it mean, exactly?

For both their operations and single products, companies usually apply the terminology countries use for their climate goals. Listed below are the most common phrasings and their exact meaning. The actual emission reduction targets behind the commitments often differ dramatically, depending on different target years, the coverage of different kinds of greenhouse gases, and the degree to which they are relying on so-called carbon offsets. Some of the terms are used interchangeably.

Net-negative (Sweden 2045; Germany after 2050) – Instead of emitting greenhouse gases, net-negative countries are aiming to remove CO2 from the atmosphere. The definition in the Swedish Climate Law reads: “The amount of greenhouse gas emitted is less than what can be reduced through the natural eco-cycle or through supplementary measures”. Supplementary measures are described as “increased carbon sequestration in forest and land, carbon capture and storage technologies (CCS) and emission reduction efforts outside of Sweden”. While these measures typically remove CO2 (not other greenhouse gases), the calculation of emissions in “CO2 equivalents” (often abbreviated to CO2e) allows, for example, methane emissions from the farming sector to be offset by CO2 uptake in forests.

Climate positive means the same as net-negative: Going beyond achieving net-zero greenhouse gas emissions to create an environmental benefit by removing additional CO2 from the atmosphere.

Decarbonisation – Refers to the process of reducing the CO2 emissions of an activity. A ‘decarbonised’ company or (global) economy would not emit any fossil CO2 into the atmosphere.

Carbon-neutral (China 2060) – Carbon neutrality means that CO2 (not other greenhouse gases) released into the atmosphere from human activity is reduced and remaining CO2 is balanced by an equivalent amount being removed. Although, in the case of China, state officials have said that “carbon neutrality by 2060” will include the reduction of other greenhouse gases, too.

Carbon negative (Microsoft) – Becoming carbon negative requires a company, sector or country to remove more CO2 from the atmosphere than it emits. 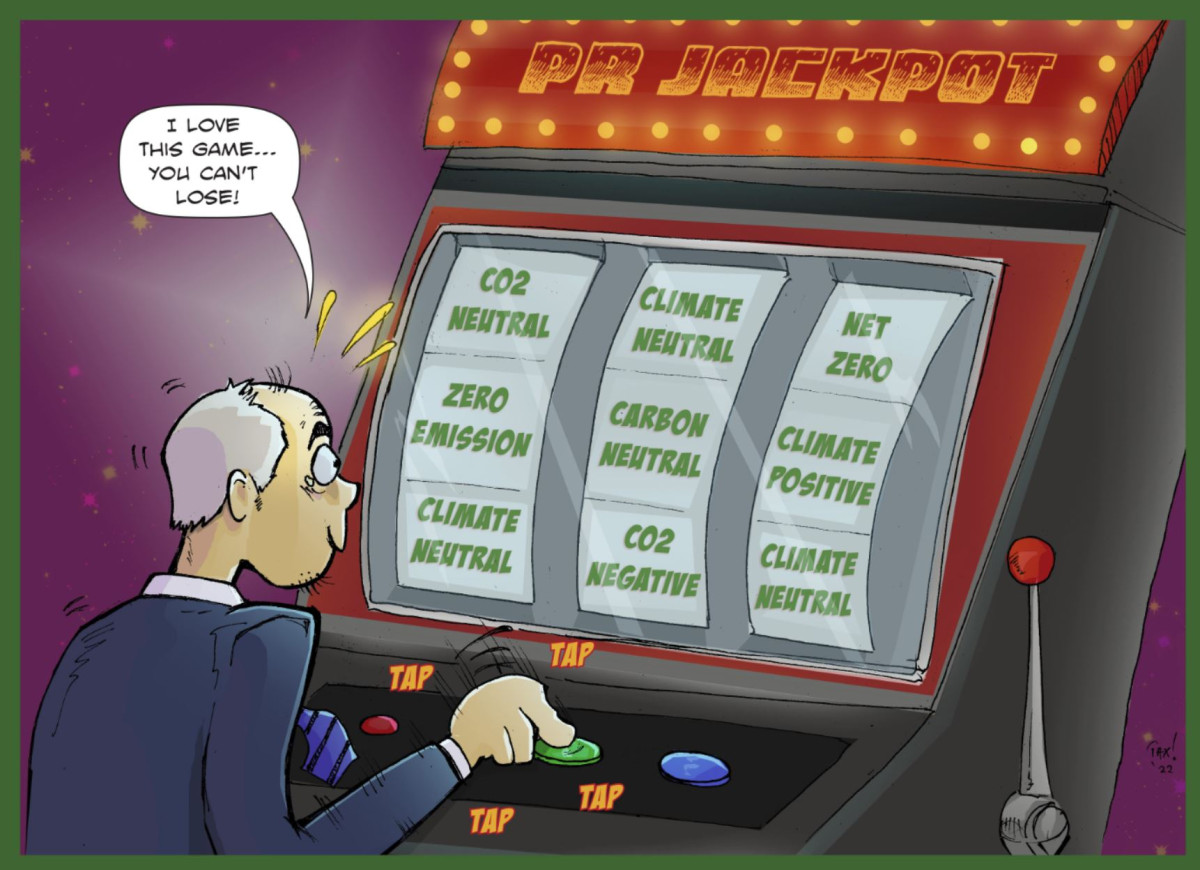 In order to have verifiable emission reduction targets and measures, companies not only have to account for the amount of greenhouse gases they emit directly, but also for the emissions they cause indirectly, for example by using electricity, raw materials, transport, or when their product or service is used and/or disposed. Most companies make use of this separation into direct and indirect emissions, as proposed by the GHG protocol in 2001. To provide even more clarity about which type of corporate emissions we’re talking, the categories of “scope 1, 2 and 3” emissions are commonly used:

Scope 1 emissions: These are the direct greenhouse gas emissions from sources that are owned or controlled by a company. For example, in company-run factories, chemical processes, power plants, vehicles, and so on.

Scope 2 emissions: These are indirect emissions from the use of electricity, heating and cooling that the company purchases and consumes for its operations. Scope 2 emissions can depend on the power mix of the country that the company operates in. But management can influence them by intentionally buying green electricity (for example, via so-called power purchase agreements – PPAs), by setting up their own renewable power sources, or by buying renewable energy certificates, often called “guarantees of origin.”

Scope 3 emissions: These are indirect greenhouse gas emissions that occur as a consequence of a company’s activities, but are not controlled by the company. Such emissions arise in the company’s value chain - for example during the extraction of raw materials, the production of packaging, product transport, and from the use of the company’s products or services, or investment portfolios.

Indirect emissions often dwarf a company’s direct emissions, depending on the business model. For example, Alphabet (the holding company of Google, YouTube, Android etc) has almost only scope 3 emissions (91.6% of its total GHG emissions in 2020). The same is true for fossil fuel companies like Shell, whose scope 1&2 emissions amounted to 68 million tonnes CO2e while its net total scope 1,2,3 emissions were 1,375 million tonnes of CO2e – hence scope 3 emissions caused by the use of Shell-produced fossil fuels made up 95 percent of the company’s emissions.

Overview of scopes and emissions across a value chain, Source: Greenhouse Gas Protocol

The trouble with carbon offsets

Climate activists argue that companies with a serious climate target should first and foremost focus on reducing their emissions. However, even well-meaning companies often find that due to their operating country’s electricity mix, or because of a lack of influence on scope 3 emissions, they are unable to avoid emitting enough CO2 to fulfil their own climate ambitions. Others decide that it is too cumbersome or expensive to actually reduce their direct carbon footprint – at which point they often turn to the purchasing of carbon offsets. These certificates are sold by companies that run carbon emission reducing projects, for example preventing deforestation, or providing low-emission cookstoves in developing countries. But the offsets must fulfil a number of crucial criteria if they are to have any effect in the fight against rising temperatures:

Additionality: Greenhouse gas reductions are only additional if they would not have occurred without the project activity, i.e. the money from the carbon credit sales. This sounds simple in theory, but is inherently hard to prove in reality, because it invariably begs the question: What would have happened without the incentive created by the carbon credits? For example, if a project is only implementing existing regulation on greenhouse gas reductions, the emission cuts aren’t additional.

Permanence: The avoided emission of a greenhouse gas is non-reversible (for a certain amount of time), thus making the carbon offset permanent. For this the different standards set very different targets. For example, forestry projects are often considered problematic. Given the rising threat of forest fires, they can burn down, thus instantly reversing any carbon savings. Some offsetting companies have therefore stopped using forestry projects altogether.

Avoid leakage: A project must not result in merely displacing the release of greenhouse gases to outside the project boundaries. For example, protecting a certain forest cannot be counted as an offset if another forest in the vicinity is cut down instead.

An increasing number of companies have come under fire because the carbon offsetting projects they use fall short on one or more of the above criteria. For example, a forest protection project that Volkswagen funded in Indonesia turned out to be neither additional nor permanent.

Because of the numerous problems associated with carbon offsets, they have lost credibility. But many experts believe that using high-quality carbon offsets has an important role to play in emission reductions.

Many offsetting projects are quality controlled by one of the leading offsetting standards (for example VCS by Verra, Gold Standard, CDM). To get a better idea which carbon credits are living up to quality objectives, the Carbon Credit Quality Initiative has developed a scoring tool for offsetting programmes.

You can find more details on carbon offsets here: