Factsheet
Following a landmark ruling by the German Constitutional Court, the country's lawmakers decided in 2021 to strengthen the Climate Action Law and to align it with new EU targets – less than two years after it first entered into force. The reform makes the government's decision to bring forward the target date for climate neutrality to 2045 legally binding and introduces stricter greenhouse gas reduction targets on the way. Germany's first major national climate law entered into force in December 2019, three months after the coalition of chancellor Angela Merkel's conservative CDU/CSU alliance and the Social Democratic Party (SPD) agreed to introduce it as part of an extensive climate package. This factsheet provides details of Germany's framework Climate Action Law. [UPDATES throughout following parliament adoption of climate law reform June 2021]

German lawmakers in summer 2021 adopted a crucial reform of the still young Climate Action Law, introducing more ambitious greenhouse gas reduction targets and details on post-2030 goals. This became necessary after a landmark ruling by the Constitutional Court on 29 April 2021. Germany's highest court ruled that the law was insufficient because it lacked details on emissions reduction beyond 2030. "The challenged provisions do violate the freedoms of the complainants, some of whom are still very young," the court said in a statement with reference to climate activists who had filed the complaint. "The provisions irreversibly offload major emission reduction burdens onto periods after 2030."

Following this ruling, the government greenlighted the necessary legal changes to speed up the country's bid for climate neutrality, aiming to hit the goal five years earlier in 2045. The cabinet approved a reform of the climate law that also includes stepping up the 2030 target for emission cuts to 65 from 55 percent, tougher emission budgets in all sectors, and new annual reduction targets for the 2030s.

The climate law first entered into force on 18 December 2019. It was part of a wider climate package the government decided in autumn of that year. Already in their 2018 coalition treaty, Chancellor Angela Merkel’s conservative CDU/CSU alliance and the Social Democrats (SPD) promised to introduce “a law that guarantees compliance with the climate targets for 2030.”.

A final version of the reformed law is not yet available. Find a preliminary version by the environment ministry here and the old text here. Until 2019, Germany did not have a climate law, like the UK’s 2008 Climate Change Act - one of the world’s earliest comprehensive framework laws on climate. Instead, Germany’s climate action policies were embedded in a multitude of national laws, government programmes, EU regulations and international agreements. Several German states have their own climate action laws.

Germany’s national climate targets were specified in government policy programmes in 2007 and 2010 and have been upheld by every government since. They were reinforced with Germany’s Climate Action Plan 2050, the country’s long-term climate action strategy.

German environment minister Svenja Schulze aimed to make these climate targets legally binding – also for future governments – and better translate EU goals into national regulation. She presented the first draft of a German Climate Action Law in February 2019. It was, however, heavily criticised by many in the coalition, and for some time there were doubts Germany would get a major framework climate law. Instead, critics within the government called for only a policy programme with climate action measures for each sector.

However, with mounting public pressure to get serious on climate – following heat waves, droughts and the Fridays for Future student climate protests in 2018-2019, the government in October presented a draft following months of internal negotiations. 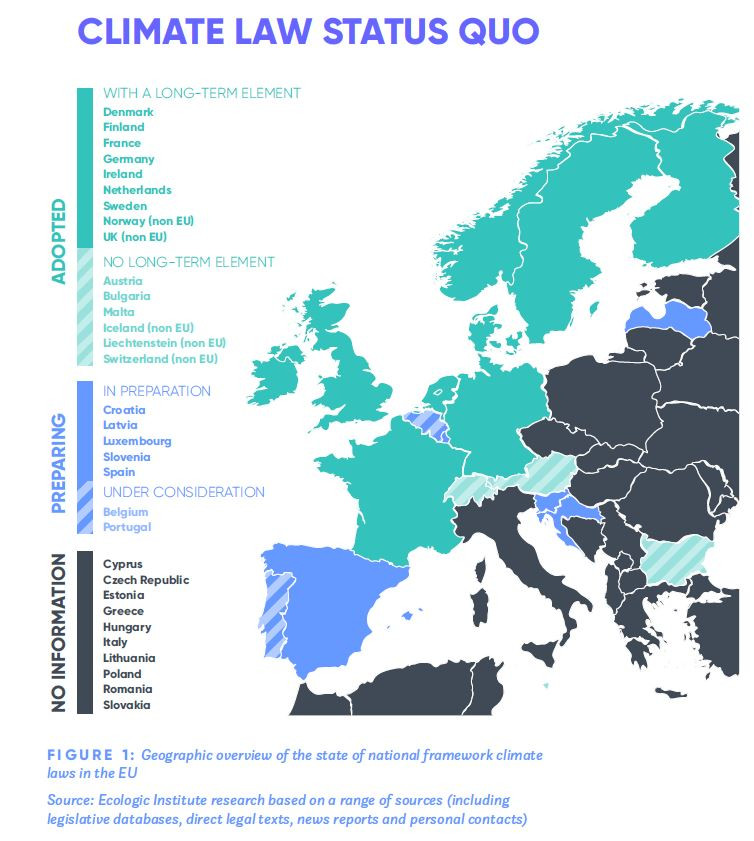 The Bundestag (federal parliament) adopted the reform of the climate law on 24 June 2021, with minor changes compared to the government's draft. The Bundesrat (representatives of state governments) gave the green light the following day.

General purpose of the law 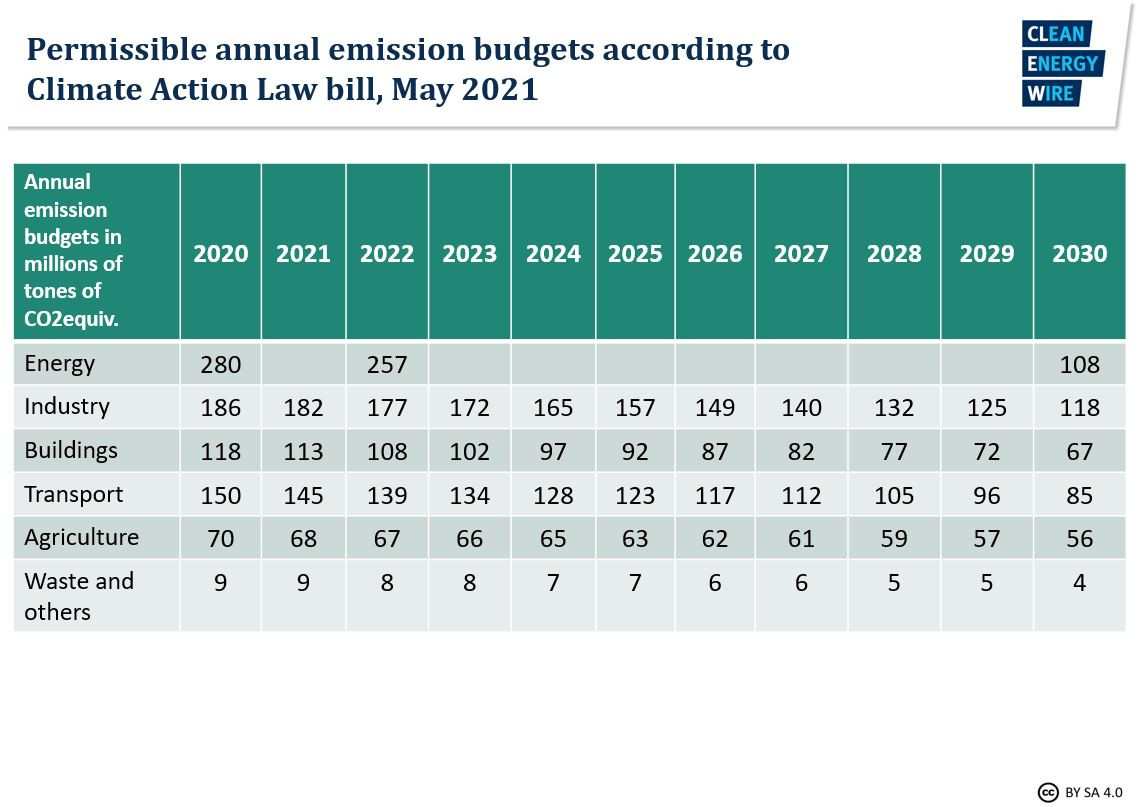 What happens in case of target miss?

Other key parts of the law

Environment minister Schulze has said Germany’s climate action needs to become “more binding, so that we actually implement what we have committed to internationally.” The minister thus aimed to draft the law in such a way “that we can reach our targets in a plannable, reliable and fair manner.”

The EU’s 2030 climate targets are already legally binding for Germany. As the EU has decided a more ambitious greenhouse gas reduction target for 2030, it is now in the process of updating all relevant climate and energy legislation. This will have consequences for Germany’s policies.

Until such reforms are decided (probably in 2022-2023), the situation is as follows: For sectors included in the European Union's emissions trading system (EU ETS) – power production, energy-intensive industry and civil aviation – there is a combined EU target to cut greenhouse gas emissions by 43 percent over 2005. For non-ETS sectors, such as transport, buildings and agriculture, each country was assigned its own target. Germany must reduce greenhouse gas emissions from all non-ETS sectors combined by 38 percent by 2030 compared to 2005 levels.

The EU Effort Sharing Regulation translates this commitment into binding annual greenhouse gas emission reductions for each EU member state between 2021 and 2030. In years in which emissions are lower than the allocation, countries can bank surpluses and use them later. In years when emissions are above the annual limit, states can borrow a limited amount of allocations from the following year, or buy allowances from other countries. This makes climate action relevant to national budgets, and potentially expensive for countries that widely miss their targets.

The Climate Action Law divides up Germany’s annual targets and CO2 budgets between economic sectors. In 2016, the government’s Climate Action Plan 2050 set targets for each economic sector to achieve by 2030, but did not break them down into annual budgets. The government now does this and makes it legally binding. “Falling annually, the total amount of CO₂ emissions still permissible will be clearly regulated by the [climate action] law, and distributed across the transport, industry, energy, buildings and agriculture sectors,” Schulze told Tagesspiegel Background.

When Schulze presented her draft to the chancellery for early coordination in mid-February 2019, the Social Democratic minister’s submission was accompanied by fierce criticism from conservative lawmakers. Some politicians from Merkel’s CDU/CSU alliance opposed the idea of a single big framework law. They did not support Schulze’s idea to make ministries financially responsible for reaching climate targets in their relevant economic sectors and would have preferred to focus on the political programme of measures by introducing several ‘climate measure laws’ instead.

To overcome the climate action impasse, Merkel had set up the so-called climate cabinet, a group of ministers with responsibilities relating to climate issues, such as the environment, transport, buildings and energy. They were tasked with deciding the “legally binding implementation” of Germany’s climate targets for 2030 before the end of 2019. The climate cabinet presented key points of a comprehensive climate package on 20 September, and a detailed Climate Action Programme 2030 and the Climate Action Law on 9 October.

How has the Climate Action Law become a priority?

Environmental NGOs, including Friends of the Earth Germany (BUND) and WWF, have been calling for a climate action law for years, and research institute Ecologic prepared a legal opinion on how to adopt the British model into German law in 2009. From that point on, the Greens, the Social Democrats (SPD) and the Left Party have all pushed for the introduction of a federal climate action law.

The SPD, then in opposition, organised a conference and published a position paper on the topic in 2010, calling for a law that includes the 2020 and 2050 greenhouse gas reduction targets in order to create investment and planning security. During a parliamentary debate in 2010, politicians from the SPD, the Greens and the Left Party criticised Germany’s climate targets for not being more than “non-binding political guidelines” from the government, and argued that these should be made legally binding.

In its 2013 election campaign programme, the SPD again called for the law. However, during coalition talks with the CDU and CSU, the negotiators agreed to introduce the government’s Climate Action Plan 2050 – a cabinet decision that is not legally binding but sets out targets and policies for subsequent governments – instead of a law.

The 2018-2021 government coalition finally committed to introducing climate action legislation in its coalition agreement of March 2018. The CDU/CSU and the SPD renewed their grand coalition and put a clear emphasis on reaching the 2030 climate targets. To this end, the government has set up the coal exit commission and similar multi-stakeholder bodies for transport and buildings to propose concrete measures to reach sector-specific goals.

“On this basis, we want to pass a law that guarantees compliance with the climate targets for 2030. We will adopt a legally binding implementation in 2019,” the coalition agreement says.