Climate & CO2
[UPDATE adds 2021 Consitutional Court ruling that Climate Law is insufficient due to lack of emission reduction targets beyond 2030] Chancellor Angela Merkel's so-called "climate cabinet" has put together the bedrock for future climate action legislation. It presented a general climate package on 20 September 2019, which included a pricing system for carbon emissions in transport and buildings. On 9 October, the government followed up and laid out the plan's details in a framework Climate Action Law and a Climate Action Programme 2030 of measures to reach targets in all sectors. The package drew heavy criticism as insufficient to reach 2030 climate targets, but some observers welcomed the climate law's monitoring mechanism that would obligate the government to make adjustments each year, should targets not be met.
More facts & background

After years of booming renewables, Germany's planned transition to a low-carbon, nuclear-free economy – the famed Energiewende – has recently run into some major hurdles. Emissions remain too high to reach climate targets, renewables expansion has slowed, and initiating changes in sectors such as transport has proven to be extremely difficult. Chancellor Merkel has therefore set up the so-called climate cabinet – a group of ministers with responsibilities in key climate policy fields – to decide necessary legislation to reach the country’s 2030 climate targets, as promised in the 2018 grand coalition government treaty.

The climate cabinet presented a package including a pricing system for carbon emissions in transport and buildings on 20 September 2019. Some weeks later (9 October), the cabinet adopted the package's details in (A) a framework Climate Action Law and (B) the Climate Action Programme 2030.

The package drew heavy criticism as insufficient to reach 2030 climate targets, but some observers welcomed the climate law draft's monitoring mechanism that would obligate the government to make adjustments each year, should targets not be met. The details must now be put into legislation by the government, and parliament must debate and adopt it over the coming months.

Clean Energy Wire has followed the debate on key issues such as CO₂ pricing for transport and buildings, the introduction of the Climate Action Law, a major legislative framework, and packages of measures for individual economic sectors. This dossier provides an overview and will be updated regularly.

For the latest, you can sign up to our Daily e-mail newsletter, or use the search function on our website to search for hashtags such as #Climate&CO₂ or the search phrase climate cabinet.

In a landmark ruling on 29 April 2021, Germany's highest court ruled that the government's climate action legislation is insufficient because they lack emission reduction targets beyond 2030. "The challenged provisions do violate the freedoms of the complainants, some of whom are still very young," the court said in a statement with reference to climate activists who had filed the complaint. "The provisions irreversibly offload major emission reduction burdens onto periods after 2030."

The German legislature (Bundestag and Bundesrat) adopted the first elements of the climate package. The Bundesrat cleared the last hurdle for the Climate Action Law and the planned emissions trading system for transport and buildings on 29 November 2019.

Follow the debate as well as politicial and legislative progress made regarding the climate package in this regularly updated news overview.

The German government cabinet has adopted the country’s first framework climate law and a detailed programme of measures to reach national and European targets for 2030. Against the backdrop of climate action protests by the Extinction Rebellion movement, ministers signed off on the package in Berlin. It lays out the details for the general plan Chancellor Angela Merkel’s grand coalition had decided on three weeks before. Energy industry association BDEW criticised the plans as “not thought through and not coherent with the objectives of the energy transition”, and environmental NGOs said they are insufficient to reach climate targets.

Chancellor Angela Merkel's so-called "climate cabinet" has put together the bedrock for future climate action legislation in Germany, just in time for UN Secretary-General António Guterres' Climate Action Summit in New York (23 September). The package, agreed after overnight coalition negotiations, includes a pricing system for carbon emissions in transport and buildings, a proposal for a framework Climate Action Law and a package of incentives and regulatory measures across all sectors. The package drew criticism as insufficient to reach 2030 climate targets, but some observers welcomed a monitoring mechanism that would obligate the government to make adjustments each year, should targets not be met. The crucial climate cabinet meeting coincided with the largest Fridays for Future climate protest Germany has seen to date.

The German government coalition has reached an agreement on the country's climate action strategy, including a pricing system for carbon emissions in all major sectors. The Clean Energy Wire presents reactions to the deal. 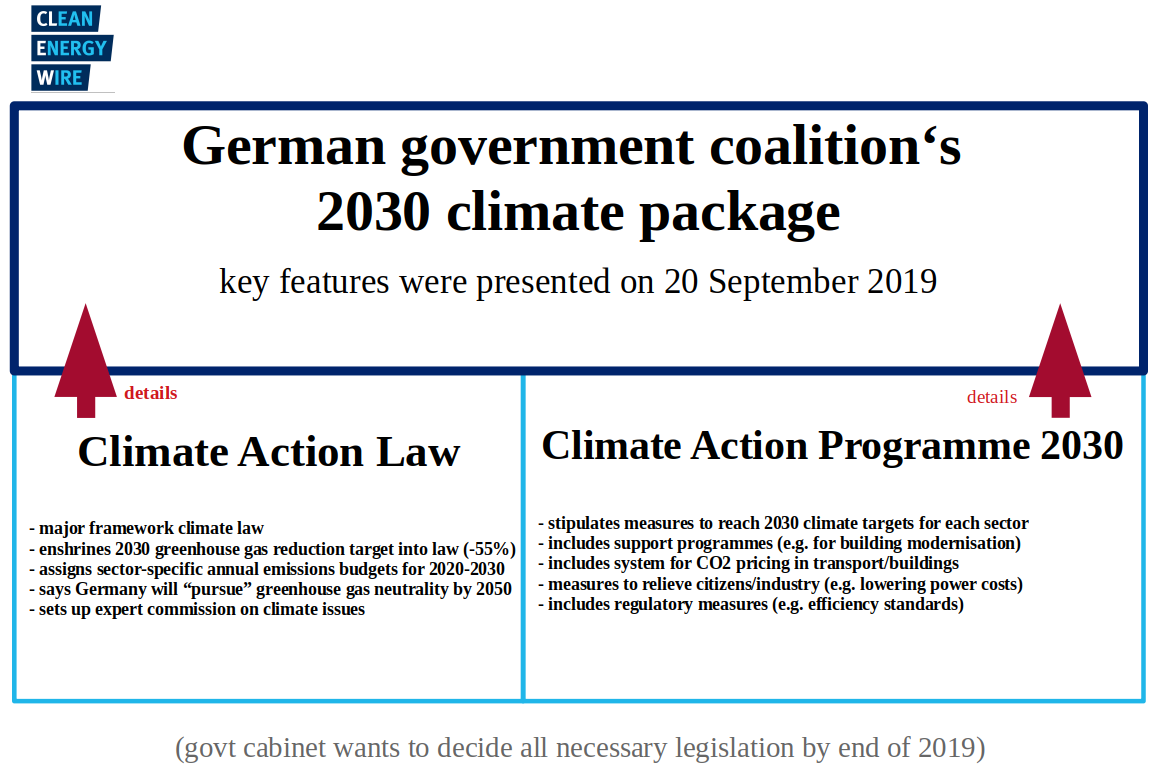 Germany's government coalition has agreed on a general strategy paper that outlines its policy ideas to reach the 2030 climate targets and reduce emissions in all sectors of the economy. This factsheet summarises the paper's key points.

Chancellor Angela Merkel's federal coalition government presented an official draft of what will be Germany's first-ever Climate Action Law in October 2019, after months of internal wrangling over the right climate policy approach for the coming decade. The law is one element of a greater package of climate legislation and policy programmes, for which the government presented key points after a long-anticipated climate cabinet meeting on 20 September. The package is meant to ensure Germany reaches its 2030 climate targets, and forms the bedrock of the country's long-term climate policy. This factsheet provides details of Germany's framework Climate Action Law and the status of the legislative debate.

Germany plans to phase out coal-fired power generation by 2038 at the latest, and the government has now prepared a draft law detailing an exit plan. The document stipulates auctions for operators of hard coal plants to take capacity off the grid according to the government’s timetable. But the draft leaves out the key question of how to deal with lignite plants, as the government is still in talks with operators about compensation payments for the shutdown of plants and mines. The law has yet to be agreed by the cabinet, and will then be sent to parliament for the regular legislative process. This factsheet explains key contents of a draft dated 11 November 2019. For the basics of the ongoing political process to translate the German coal exit into action read the factsheet Implementing Germany’s coal exit proposal – the road ahead.

The German government has decided to put a price on greenhouse gas emissions in the transport and building sectors as a key instrument to help reach its climate targets. The cabinet adopted the first draft of a national law for a trading system for transport and heating emissions on 23 October. This factsheet explains the details of the planned system, legal doubts, the criticism of the low entry-level price and expected distributional effects, as well as the next steps in the legislative process.

Germany has presented an official programme of measures for the country to reach its 2030 climate targets. The Climate Action Programme comes as a supplement to the country's Climate Action Law as part of a comprehensive package to set Germany's climate policy on a new footing that includes carbon pricing across sectors and a legal control mechanism meant to ensure continuous emissions reduction. This factsheet provides an overview of the planned measures.

This factsheet provides an overview of Germany's greenhouse gas emissions and the government's energy transition targets.

Germany's planned exit from coal will play a major role in reducing the country's greenhouse gas emissions. This factsheet looks at the final report of Germany's coal exit commission, which sets out a pathway for the country to phase out the fossil power source and make progress on its slow emissions reductions.

German leader Angela Merkel has been nicknamed "Climate Chancellor" for her long-standing international engagement for emissions cuts. Many wonder if Merkel can still live up to that reputation in her fourth term as chancellor, now that she has announced to step down as conservative party leader and doubts about the ability of her stumbling government coalition to drive key energy and climate policy decisions persist. 2019 could be a decisive year, as the German government has promised to present key climate action legislation before the end of the year. This factsheet provides a timeline of Merkel's climate involvement.

HOW DID WE GET HERE?

One week before the decisive climate cabinet meeting, this preview provides an overview regarding the government's plans and yet unresolved points of contentions. Mere days are left for the shaky grand coalition of Conservatives (CDU/CSU) and Social Democrats (SPD) to mould a myriad of party and ministry proposals on how Germany can reach 2030 climate targets into a joint strategy that can be agreed upon in the 20 September "climate cabinet" meeting.

CLEW looks at the state of affairs in German climate politics in the weeks leading up to the climate cabinet meeting on 20 September, and how the climate debate was pushed to the centre of the public focus by heat waves and the Fridays for Future protests.

After shying away from the debate for a long time, Germany's political leaders are finally considering putting a price on CO2 to help reach the country's climate targets. Ministries, major parties and research institutes are all pitching their ideas for how a carbon price could be designed. CLEW follows the debate and regularly updates this article with the latest developments.

Energy and climate in the 2018 coalition treaty

Re-elected chancellor Angela Merkel's grand coalition government of Conservatives and Social Democrats has said it wants to continue the Energiewende in a "clean, secure and affordable manner," and make sure Germany remains a pioneer in climate protection. In its 2018 coalition treaty, the partners promised to introduce legislation in 2019 to ensure that the 2030 climate targets are reached.

Germany’s new government also decided to fully implement the Climate Action Plan 2050, decided in 2016. The government agreed on a basic framework for largely decarbonising its economy to reach 2050 climate goals. It includes target corridors for reducing greenhouse gas emissions in individual economic sectors and emphasises the need to ensure economic competitiveness throughout the transition. This factsheet gives an overview of the agreed plan.