Factsheet
Hamburg, which is home to Europe's third-largest container port on the river Elbe, is particularly vulnerable to rising sea levels and developing climate change adaptation measures. Close to 80 percent of Hamburg citizens said climate action was either important (44%) or very important (35%) for their decision on who to vote for in the election on 23 February 2020. In its climate action law adopted little more than a week before the election, the government coalition of the Social Democrats (SPD) and the Green Party pledged to achieve climate neutrality by 2050 and to reduce CO₂ emissions by 55 percent by 2030, compared to 1990 levels. This target could be difficult due to low levels of renewable power generation and the city's climate blemish: hard coal plant Moorburg. [UPDATE adds preliminary election results.] 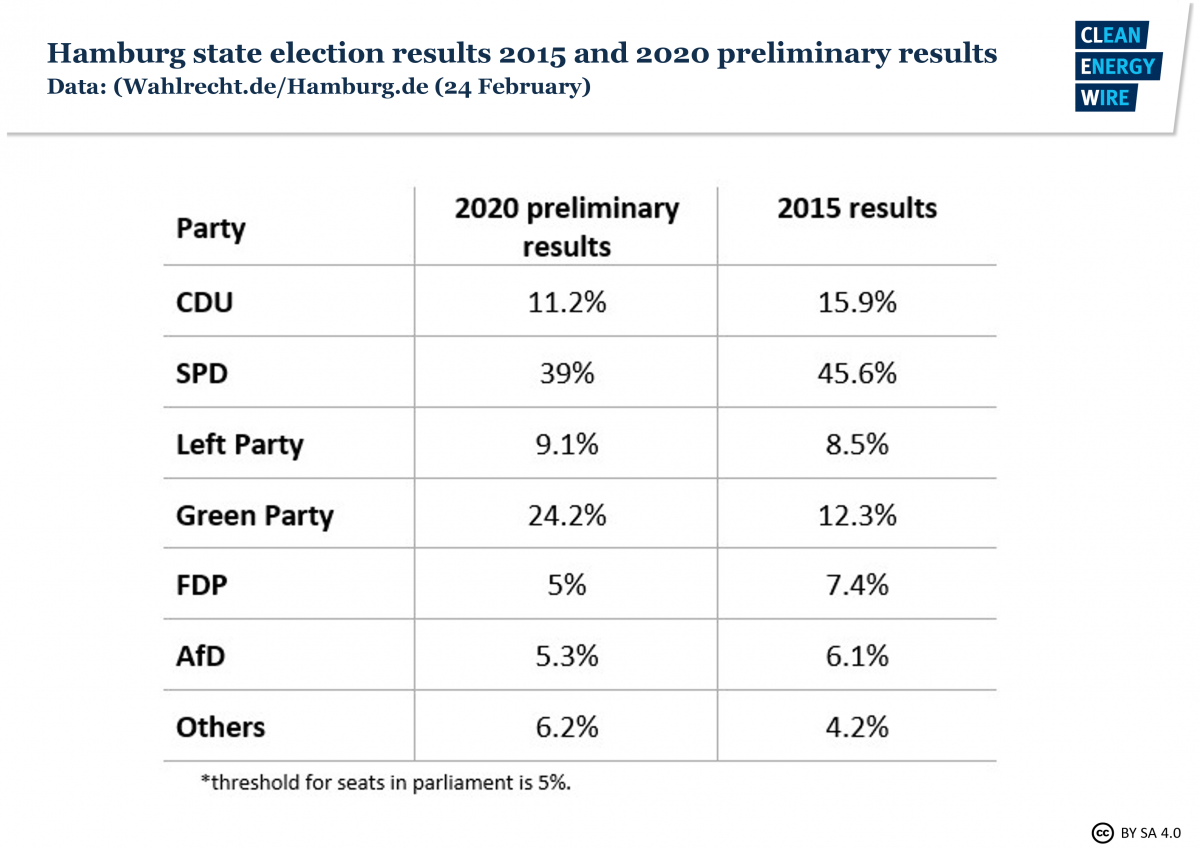 Free and Hanseatic City of Hamburg

In December 2019, Hamburg's city government of the SPD and the Greens agreed on a climate action law and an update to its climate plan aiming for a 55 percent reduction in CO2 emissions by 2030 compared to 1990, and for the state to be climate neutral by 2050. This would mean reducing emissions to 9.3 million tonnes by 2030, compared to 16.4 million tonnes in 2017. Both were adopted by the state parliament on 12 February in its last session before the election.

The heating sector in particular is expected to bring reductions through a decarbonisation of district heating, incentives for the use of hybrid heating systems and the further development of energy efficient neighbourhoods. Following a citizens' referendum, Hamburg recently bought back its power, gas and district heating networks for 1.8 billion euros in total, in part to be able to move forward with climate action measures. In 2019, a citizen initiative succeeded in pushing for the end of coal heating by 2030.

Hamburg's climate action law also states that all buildings which enter construction from 2023 onwards must have solar arrays installed on their roofs – if economically viable. The city wants to boost sustainable mobility by updating and expanding public transport, ensuring car-free inner-city zones and more public charging points for e-cars. In 2019, Hamburg, Germany's other coastal states and the federal economy ministry decided to make it more attractive for ships entering the country's port cities to turn off their combustion engines for the duration of their stopover. Instead, they will use electricity from the local grid for power supply. Developing the infrastructure for this is also part of Hamburg's climate plan. 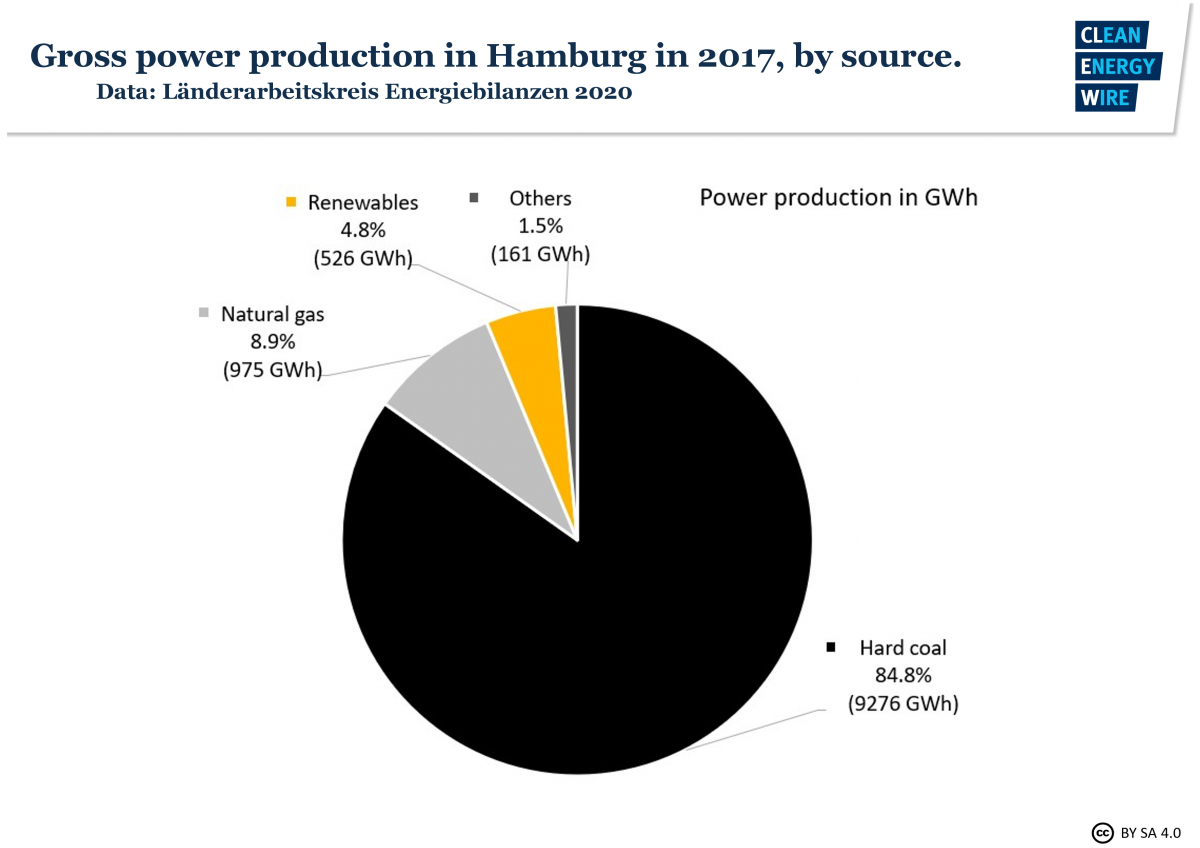 Hamburg, therefore, has a hill to climb having set the target of a fully renewable power supply by 2035. As late as 2015, hard coal power plant Moorburg, however, went online on the bank of the Elbe, to the headline "Greetings from the Stone Age" in one newspaper. The European Court of Justice ruled that Germany's approval of the plant was in breach of environmental rules because its cooling system endangered protected fish species, but Swedish utility Vattenfall has continued its operation. Hamburg's state premier and first mayor Peter Tschentscher of the SPD has proposed that Moorburg be shut down "many years" earlier than the current end date of 2030 and replacing part of it with a large hydrogen production facility while converting its second block into a gas power plant. 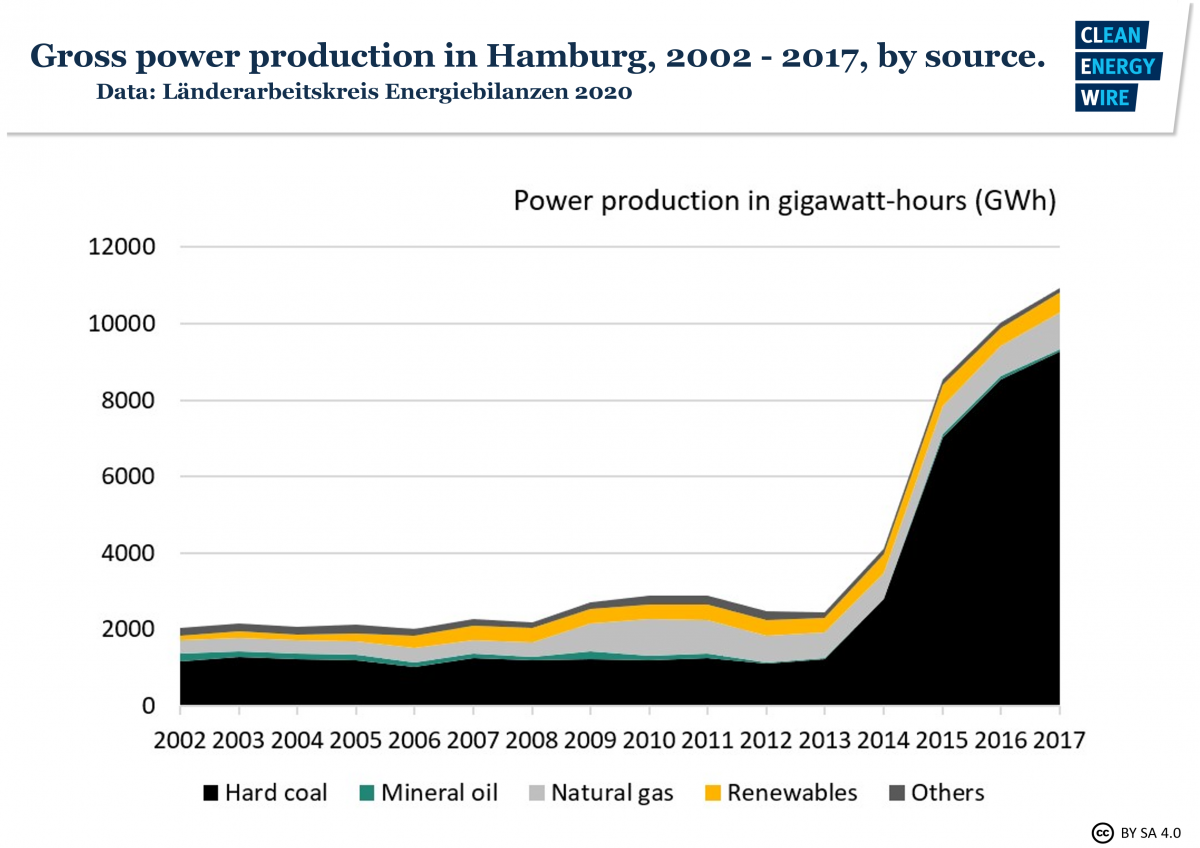 Most of Hamburg's renewable power comes from biomass (2.6% of the state's total gross power production in 2017). Although wind energy only accounted for 1.4 percent of gross power production, the city state is home to a thriving renewable energy industry, located just 110 kilometres away from the North Sea. Two thirds of all the offshore wind parks being planned or under construction in the North Sea and the Baltic Sea are or have been developed in Hamburg. In Hamburg itself, close to 70 wind turbines are installed with a total capacity of over 112 megawatts (MW). While PV only accounted for 0.2 percent of Hamburg's gross power production in 2017, it boasts the most solar arrays per square kilometer of all German states.