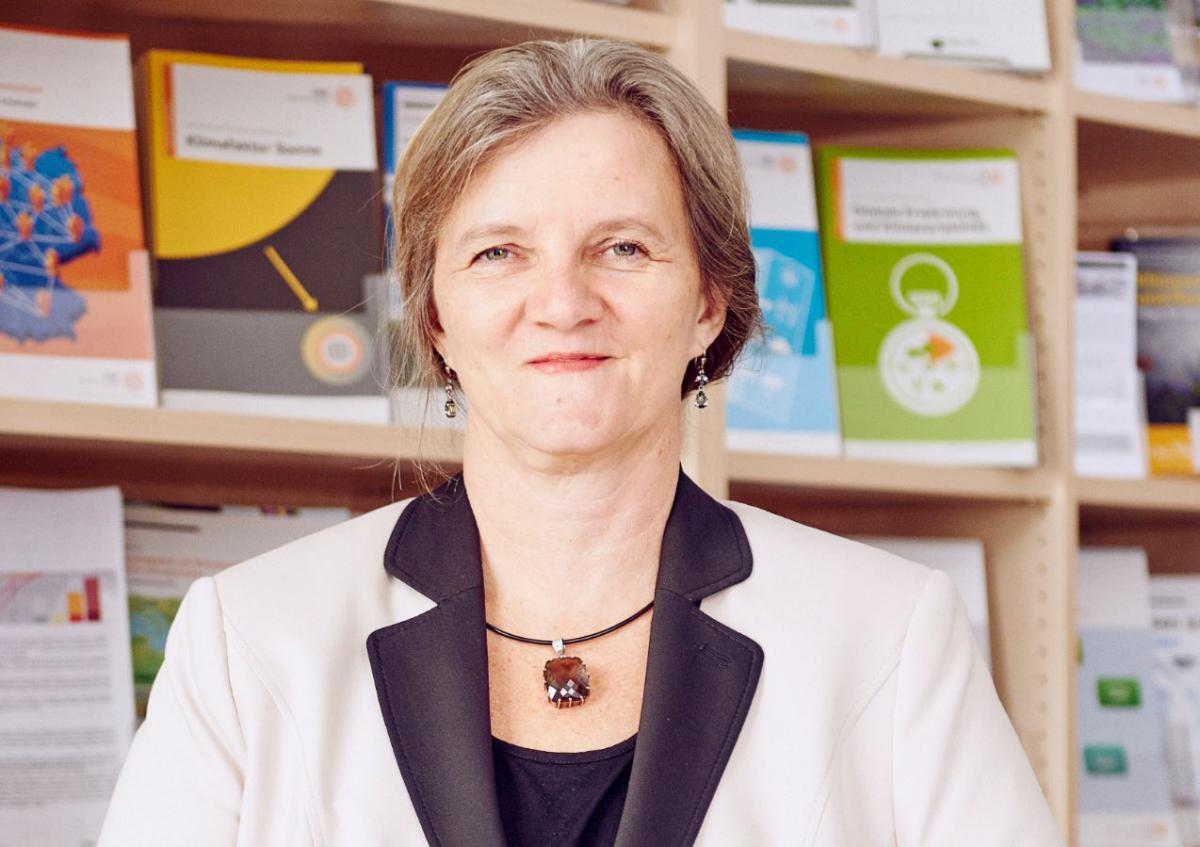 Daniela Jacob is director of the Climate Service Centre Germany. Photo: Christian Schmid/HZG.
The final negotiations for a global climate treaty in Paris are just weeks away. What is the German perspective on an international climate agreement and what has the energy transition (Energiewende) got to do with it? The Clean Energy Wire talks to German businesses, researchers, negotiators, politicians and activists who have stakes in the talks. Today: Climate scientist Daniela Jacob, who is director of the Climate Service Center Germany (GERICS) in Hamburg which offers knowledge and advice on climate change to government, administration and businesses.

Daniela Jacob: It is really important that the negotiations lead to a new agreement to follow on from Kyoto, with a binding emissions goal to limit global warming to 2 degrees. But I also think that unless we successfully implement economic instruments, we will not succeed in this goal. These financial measures would probably be independent from any formal agreement and localised on a national level. I really hope that in Paris there will be representatives for each country who have the authority to make binding decisions on both emissions and finance.

Transparency in the negotiations is very important. This will show the integration of different national interests. Dealing with conflicts of interest will be one of the biggest challenges. We are asking countries to cut back economically to reach climate mitigation goals. Finding the right compromise is a really big challenge.
Everyone benefits from emissions reduction but the costs fall on those countries making the reductions. Some countries are trying to “freeload” – to be less active on mitigation and let others carry the burden. So I think it is important that all nations agree to a multilateral approach to protecting the climate. The emerging economies must be included – Russia and China, but also India and Brazil.
It is a question of justice between developing countries and more industrialised countries. We have to negotiate acceptable levels of emissions reduction for developing countries to balance with economic and social development. You can’t really ask developing countries to slow down development. So I think this is a very difficult question. And then we come to the question of finding appropriate levels of compensation paid to the Global South by the Global North for its additional emissions.

Germany is quite a rich country and so we should play a leadership role in investing in climate funds for developing countries. Germany can also play an important role in the transition to a decarbonised economy. So I think Germany should move forward on implementing  nationwide economic measures – in addition to the European Emissions Trading System (EU ETS) – such as carbon taxation. Of course there are economic considerations for Germany, but also opportunities for innovation towards a decarbonised society. Germany also has an important voice within the EU, so it is very important to show that the Energiewende can succeed without a reduction in living standards – to show that it is an opportunity, not a burden.

Germany has detailed goals on emissions reduction, which not every country has. Other countries can hopefully learn that a strong push for renewables is possible, that it is financially viable, and that the transition to renewables doesn’t have to impact security of supply. This is very important. I also think others can learn that a more integrated approach to the energy transition is important – bringing in heating and mobility as well as electricity. Although we are focusing on energy, many aspects of life and society are affected, so a systemic approach is needed.

Can a climate agreement in Paris prevent catastrophic effects of climate change?

We live in a changing climate and the impacts are already very visible – storms, melting glaciers, floods and landslides. We have to reduce emissions as much as possible. If we continue to emit then climate change impacts in the second half of this century will be disastrous. If we achieve the 2-degree goal we still have negative impacts of climate change in some regions but society will probably be able to cope.
At the same time, we have to implement adaptation measures to cope with today’s changes in weather brought on by climate change. This has been less strong in negotiations because of voices saying that if you talk about adaptation you reduce the need for mitigation. But both have to be done. Implementing adaptation measures on the ground – which are also good for mitigation – is really important. For this we need local and national activities.
I think if we reach an agreement to limit global warming to 2 degrees we can avoid catastrophic consequences of climate change. It is important to stress that if COP21 fails to reach a global agreement it could mean the end of globally coordinated climate protection on a political level. But I think we need many bottom-up approaches too, like nationwide carbon taxes, for example. We need both a global agreement and efficient, effective instruments within the different nations.