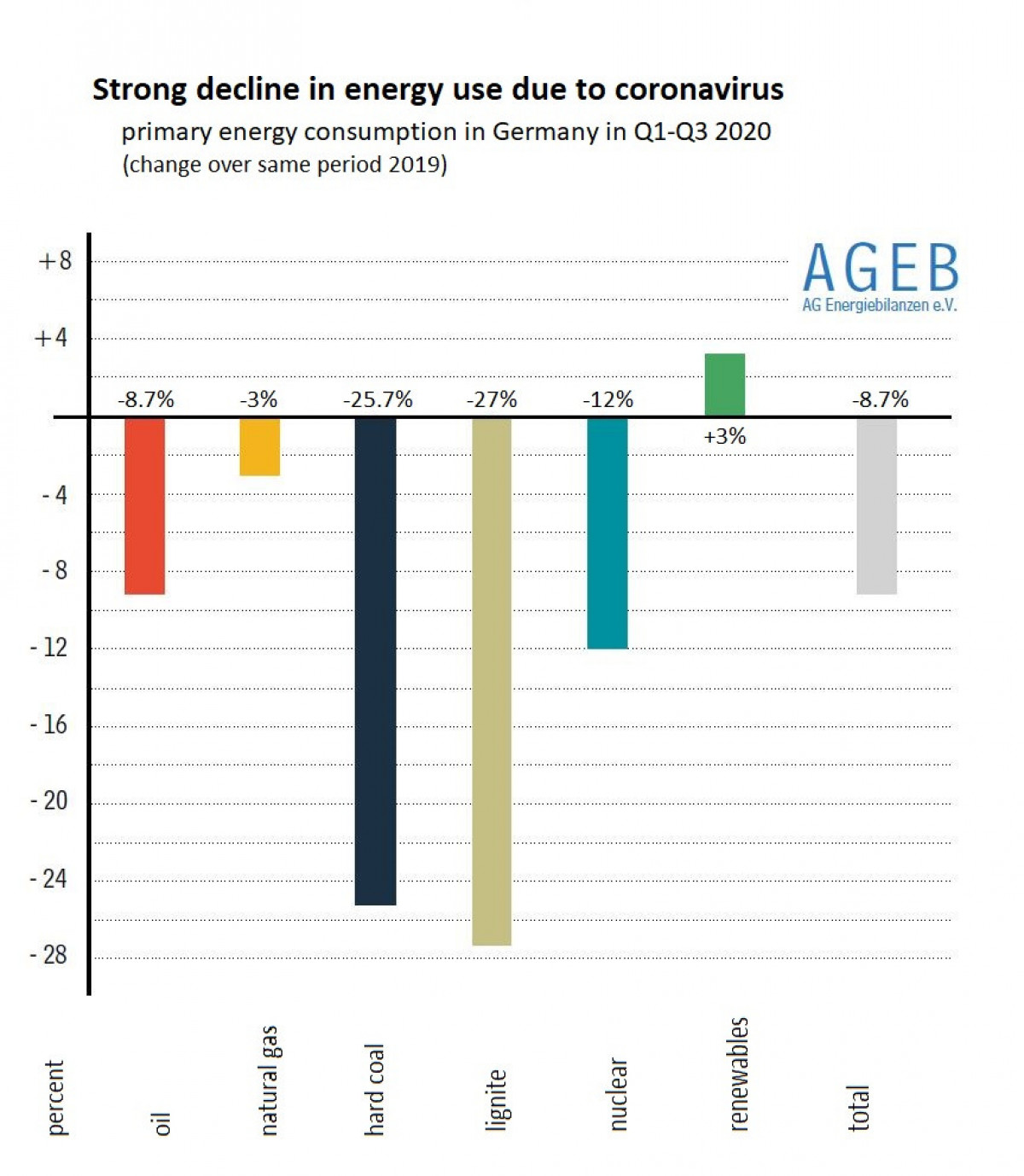 Energy consumption and related CO2 emissions in Germany are set to fall significantly in Germany in 2020, data by energy market research group AGEB shows. The drop in CO2 output to a large extent is caused by the coronavirus pandemic severly depressing demand and means Germany will probably reach an emission reduction goal it had already written off. Particularly in the transport sector, consumption of fossil fuels fell steeply, while the share of renewables in the country's total energy consumption climbed upwards.

Energy consumption in Germany in 2020 looks set to drop by about seven percent, meaning energy-related CO2 emissions will be reduced by ten percent, according to estimates by energy market research group AG Energiebilanzen (AGEB). Although the transition from fossil to renewable power production in the German power system continued unabated this year, the significant emissions reduction is mostly due to demand being depressed because of the coronavirus pandemic, AGEB said, based on data until September. The share of renewables in total primary energy consumption grew by about two percentage points in the first nine months to 16.8 percent.

The researchers expect energy-related CO2 emissions to fall by about 72 million tonnes, meaning Germany will likely surpass its original overall greenhouse gas reduction target of 4o percent by 2020, compared to 1990 levels. "Should the coronavirus pandemic's course mandate further measures, a stronger reduction of energy consumption and CO2 emissions has to be expected," they added. While energy consumption had dropped significantly in the second quarter of the year, directly after Germany went into its first nationwide lockdown in March, it modestly recovered during the summer. In November, rising infection numbers led Germany and many other countries in Europe to enter a second lockdown, even though restrictions on economic activity in Germany this time so far have been more relaxed than in March.

The drop in energy consumption was to a large part caused by much lower demand for transport fuels, as mobility during the lockdown was among the sectors hit the hardest. Overall, oil consumption shrank by nearly nine percent, while aviation fuel consumption dropped almost by half. Moreover, relatively high temperatures and corresponding lower heating demand during the winter and early spring contributed to natural gas consumption falling by three percent, AGEB said.

Coal-fired power production continued its rapid decline in Germany, which was the main driver for a 26-percent drop in hard coal use and lignite consumption falling even more (27%). "This development is primarily caused by a significantly higher power production from wind and solar PV installations and by a stronger use of natural gas for power production." Coal use in the steel industry at the same time was reduced by 18 percent due to the depressed industrial output. Nuclear power production dropped twelve percent compared to 2019 due to the closing of the plant Philippsburg at the end of last year.

The pandemic also caused "significant shifts in the European power production system”, the researchers found. Lower power use in Germany's neighbour countries and reduced gas prices meant power transfers to Germany increased and exports decreased, meaning Germany had less net exports than over the past years.