Germany's railway service Deutsche Bahn has inked an order worth one billion euros for new ICE high speed trains. The semi-public company will buy 30 trains from Siemens Mobility. They will enter into operation by 2022 and provide about 13,000 new seats to passengers. "Deutsche Bahn makes a record investment in new trains," said company head Richard Lutz, adding that the company's total train capacity will grow by 20 percent in the next years. "Even if demand [for rail transport] has dropped steeply during the coronavirus pandemic, there's every indication that a climate-friendly rail service is the right thing in the long-term," Lutz said. Transport minister Andreas Scheuer called the record order a "strong stimulus signal" during the economic downturn caused by the pandemic that would help to secure thousands of jobs in the country. The company said its total ICE fleet will grow to 421 trains by 2026 with a capacity of 220,000 seats.
However, despite the huge investments in Deutsche Bahn's train fleet, transport NGO Allianz pro Schiene criticised that Germany's per capita investments in rail transport are still much lower than in most other countries in Europe. With 76 euros per citizen, Germany invested less than a fifth of what Switzerland puts into its rail network per capita and also significantly less than Sweden, the UK or Italy, the NGO said. "It's outdated to put the majority of transport infrastructure investments in roads, like the German government does," said NGO head Dirk Flege, arguing that countries like Austria invested two thirds into expanding rail services and only one third into road traffic in 2019. While Germany has greenlighted a massive increase of railroad investments in the context of its climate action programme last year, Flege said it still needs to be seen whether this marks a change of heart in transport policy. "Only when rail transport takes precedence and government investments go up lastingly and sustainably can people expect a transport transition with railroad infrastructure on a European top level," Flege argued.

In late June, the government introduced its Rail Transport Master Plan that comes with a doubling of its annual investments in rail infrastructure to improve the track network as well as digitalisation and climate standards, with investments totalling 86 billion euros by 2030. With 151 million passengers on long-distance trains, Deutsche Bahn registered a new record in 2019. But with people shying away from using public transport during the coronavirus pandemic, 2020 looks set to see a steep drop in passenger numbers. 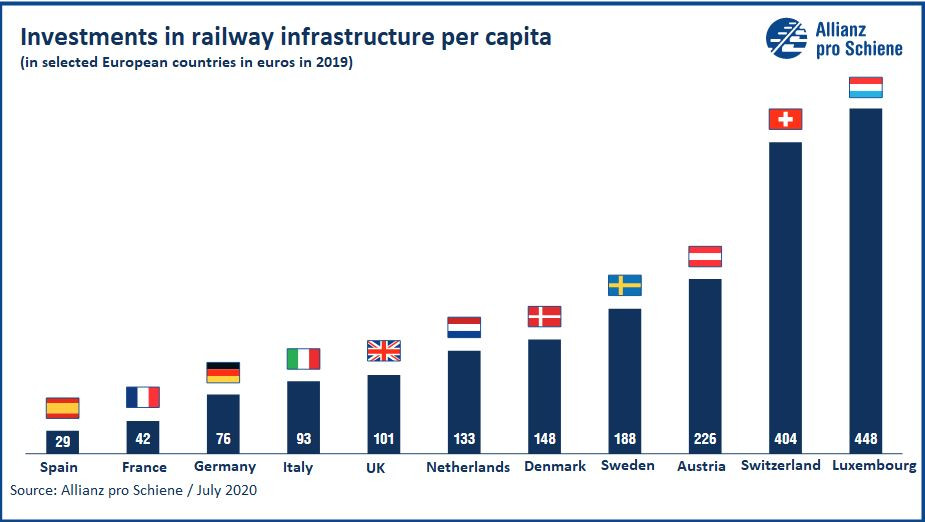