Lower economic growth and favourable weather have reduced Germany’s energy consumption by 3.5 percent in the first six months of the year, compared to the same period 2021, first estimates by energy research group AGEB have shown. Primary energy consumption in the country stood at about 5,950 petajoules between January and July 2022, with rising energy costs among the reasons why German customers reduced demand, AGEB said. Economic output fell by 1.5 percent during the same period, but higher prices also triggered a boom in energy saving investments, which have become more attractive as energy bills continue to grow.

Consumption of mineral oil in the first half of the year was 7.3 percent higher than in the same period of 2021, while all other petroleum products also noticeably increased in consumption. This is likely due to the fall of consumption of these products in 2021 as a result of the ongoing pandemic, the researchers said. Meanwhile, natural gas consumption was down almost 15 percent in the first half of this year compared to last. This was said to be due to milder weather and the higher prices as a result of the shortages across Europe. AGEB cited an increase in the contribution of renewable energy to Germany’s supplies as another reason as to why gas consumption fell.

Following the closure of three reactors at the end of 2021, nuclear energy production fell by almost 50 percent. Lignite consumption was up 10.6 percent in the same period, although still 5 percent lower than its use in the first half of 2019. Renewables contributed an additional 4.7 percent to the generation mix in the first half of 2022 compared with the previous year, with good wind conditions stated by the researchers as the reason for an 18 percent increase in wind power output. Solar panels also increased their contribution by 20 percent, whilst hydropower plants and biomass had a slight drop in their respective contributions.

Carbon dioxide emissions from energy production increased overall by 1 percent during the period compared with 2021 levels. The researchers put this down to the increase in coal and lignite which largely replaced the losses from a reduction of nuclear and natural gas output. In the first quarter of 2022 energy consumption was down 2 percent compared to the previous year. Germany is still currently under a lot of stress regarding securing energy for the winter as Russian gas supplies continue to drop, causing plans to reignite coal plants. This is estimated to lead to an increase of emissions of 30 million tonnes. 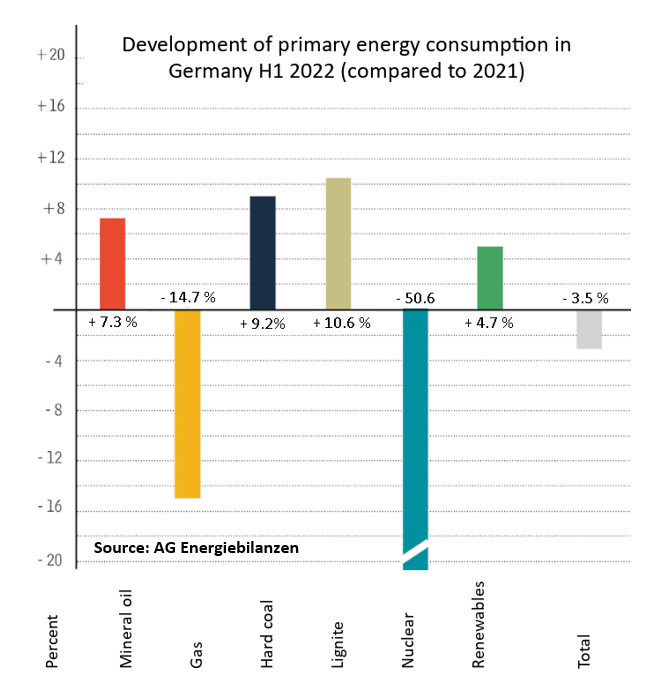 Energy efficiency in Germany improved by 3.2 percent in 2018 – AGEB