Warm weather and energy saving measures in the context of rising prices exacerbated by Russia’s war on Ukraine have reduced Germany’s energy consumption by about 2 percent in the first quarter of 2022, energy data service AGEB has said. Preliminary data analysed by AGEB show that the country’s total domestic demand for energy stood at 3,365 petajoules, 1.9 percent below the first three months of 2021, when much of Europe grappled with the effects of pandemic lockdowns. At the same time, Germany’s GDP was 4 percent higher than during the same period one year before, which had an increasing effect on consumption. The biggest drops in consumption – nearly 50 percent – were registered for nuclear power as a result of the decommissioning of several reactors at the end of last year. Natural gas consumption was 9 percent lower than in 2021. But several forms of energy generation also saw an increased demand in the first quarter of this year: hard coal consumption climbed by 5.4 percent and oil consumption by 10 percent, fuelled by a much higher level of mobility than in 2021. Likewise, lignite use grew by 1.5 percent and that for renewables by about 8.5 percent, AGEB said.

The main reason for depressed natural gas demand in the first three months of this year was warm weather, the researchers said, adding that changed consumption patterns due to high prices and geopolitical uncertainties also contributed to lower demand. “Moreover, the use of natural gas for power production decreased since renewables contributed more.” Hard coal consumption’s increase has been partly caused by the decommissioning of nuclear plants, AGEB added.

The outbreak of war in Ukraine is shaking the foundation of Europe's energy and security architecture, as a decade-old reliance on Russian fossil fuel imports could come to an end. This has prompted some consumers to change behaviour, but it will still take years to transform whole sectors of the economy. Germany aims to become climate neutral by 2045. 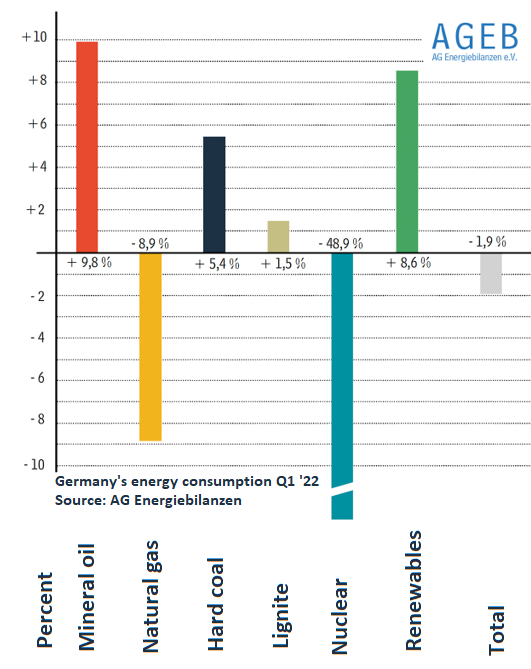