Factsheet
Russian oil supplies could be part of a next sanctions package to weaken Russian president Vladimir Putin's regime for waging war on Ukraine. While trade in many products has already been curbed, reducing the import of fossil fuels has been among the most difficult decisions for the EU. European countries are highly dependent on Russian coal, oil and gas, albeit to different degrees. While repeatedly warning that cutting off Russian gas supplies could lead to lasting economic damage for Europe, the German government has agreed with other European states to wean the bloc off Russian hard coal and said that becoming independent from Russian oil is more difficult but could be achieved by the end of the year. This factsheet compiles information on the practical challenges this would mean for the German oil infrastructure, refineries and security of supply.

What are the government’s plans to reduce oil imports from Russia?

The German government has announced that it will reduce oil imports from Russia by half until the middle of the year and achieve near-complete independence by the end of 2022. Many companies have already decided not to renew contracts with Russian producers and are replacing Russian imports with other suppliers, the economy and climate ministry said. “Changed supply chains will already take effect in the coming weeks and months,” said the ministry in April 2022.

Germany is serviced by three pipeline systems for the west, the east and the south of the country. A pipeline from Italy services the south. Northern and western German refineries are connected to terminals in German and Dutch North Sea harbours. Eastern Germany receives its oil through the Russian Druzhba pipeline – the large refineries of Schwedt and Leuna are additionally connected to the harbours of Rostock and Gdansk. The Druzhba pipeline is operated by Russian company Transneft; around one third of Russian oil imports arrive by this route.

There are no connections between the pipeline systems of eastern and western Germany. Alternative oil supplies to the east will have to come via the Baltic Sea port of Rostock and Gdansk, as well as by road and railway, the economy ministry has said. Experts have said that bottlenecks in the supply chain are likely to occur simply because of the limited number of oil tankers landing in German harbours. The German government highlighted similar issues with the availability of trains and lorries to bring oil from the west to the east. 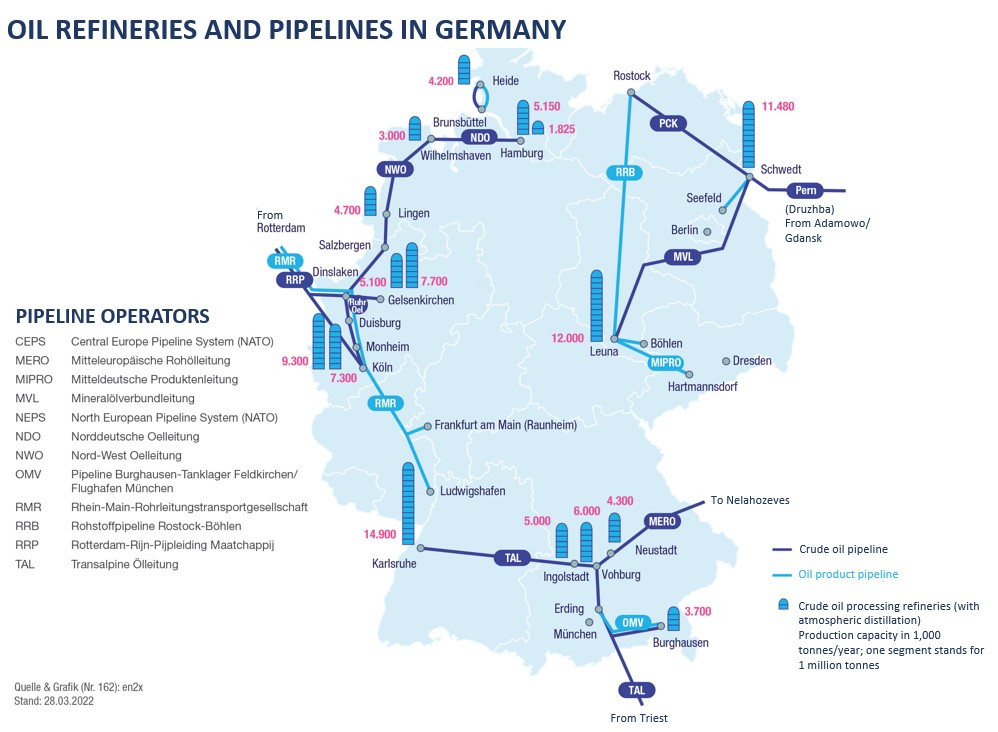 There are 16 refineries in Germany that turn crude oil into fuels, such as heating oil, petrol, diesel and kerosene. In eastern Germany, the refineries of Schwedt and Leuna process up to 12 million tonnes of crude oil per year that come through the Druzhba pipeline. In the states of Berlin, Brandenburg, and Mecklenburg-Western Pomerania, nine out of ten cars run on fuel from Schwedt, the company writes on its website. Leuna supplies around 1,300 filling stations in Saxony-Anhalt, Saxony and Thuringia, writes dpa.

“However, an immediate embargo on Russian crude oil could lead to market distortions and bottlenecks in the supply of petroleum products regionally in eastern and central Germany, at least temporarily,” the economy and climate ministry warned.

Apart from ensuring that enough oil is delivered once supplies through the Druzhba pipeline dry up, the two refineries will also have to cope with a different kind of crude. At the moment they are specialised in the oil from certain sources in Siberia and converting refinery processes will require investment, Hendrik Mahlkow from the Kiel Institute for the World Economy (IfW) told dpa.

For the refinery in Leuna, operator TotalEnergies has announced that it would not enter into or renew contracts to purchase Russian oil, which, according to the company, means that Russian oil and petroleum products will end on 31 December 2022 at the latest.

The other large refinery in Schwedt, PCK, is partially owned by Russian company Rosneft. The capacity of the refinery is 11.6 million tonnes of crude per year, with Rosneft’s share in the capacity standing at 6.3 million tonnes per year, according to company information from November 2021. After previously holding 54 percent of the shares, it bought the stakes of Shell on 18 November 2021, increasing its ownership of the company to almost 92 percent. Only three days before the Russian attack on Ukraine, the Federal Cartel Office cleared the purchase. However, the federal economy and climate ministry a few days later announced that it would put the deal under review. In the so-called investment audit, it will check whether the foreign investment is expected to impair public order or security of the country.

The German government also announced in the beginning of April 2022 that it could place Rosneft under fiduciary management or even expropriate them "if there is a concrete danger that without a fiduciary administration the company will not fulfil its tasks serving the functioning of the community in the energy sector and there is a threat of an impairment of the security of supply”. Gas supplier and storage operator Gazprom Germania is already under the control of the German authorities after they were discarded by the Russian parent company.

However, as long as this is not the case for Rosneft’s PCK refinery, it is doubtful whether the company will take steps to reduce Russian oil deliveries.

Germany and other European countries receive a lot of already refined diesel from Russia. Almost 15 percent of diesel sold in Germany is from Russian refineries. German refineries are already heavily geared to diesel production but still cannot meet the demand, researchers from the German Economic Institute (IW) said in March. As long as this is the case, diesel prices at the pump will remain high for German drivers.

Germany has a statutory oil reserve of around 15 million tonnes of crude oil and 9.5 tonnes of mineral oil products (e.g. petrol, diesel, heating oil, kerosene), which are distributed across Germany so that local supply bottlenecks can be addressed. If all Russian deliveries were to cease at short notice, the oil supply would be secure for more than 200 days (not considering transport issues and crude oil qualities), the government says.

To help stabilise prices on the world market, Germany and other members of the International Energy Agency (IEA) have released some of their oil reserves since the beginning of the war against Ukraine.

“Depending on the market situation on the basically very flexible world market, substitutes could very probably be procured during this time for refineries that are supplied via seaports,” wrote the economy and climate ministry in an April 2022 evaluation. At the same time however, the Organization of the Petroleum Exporting Countries (OPEC) has not shown any great desire to increase production to make up for the shortfall in Russian oil in Europe.

Q&A: How can Germany and the EU weather a fossil fuel embargo on Russia?