Q&A: How can Germany and the EU weather a fossil fuel embargo on Russia? 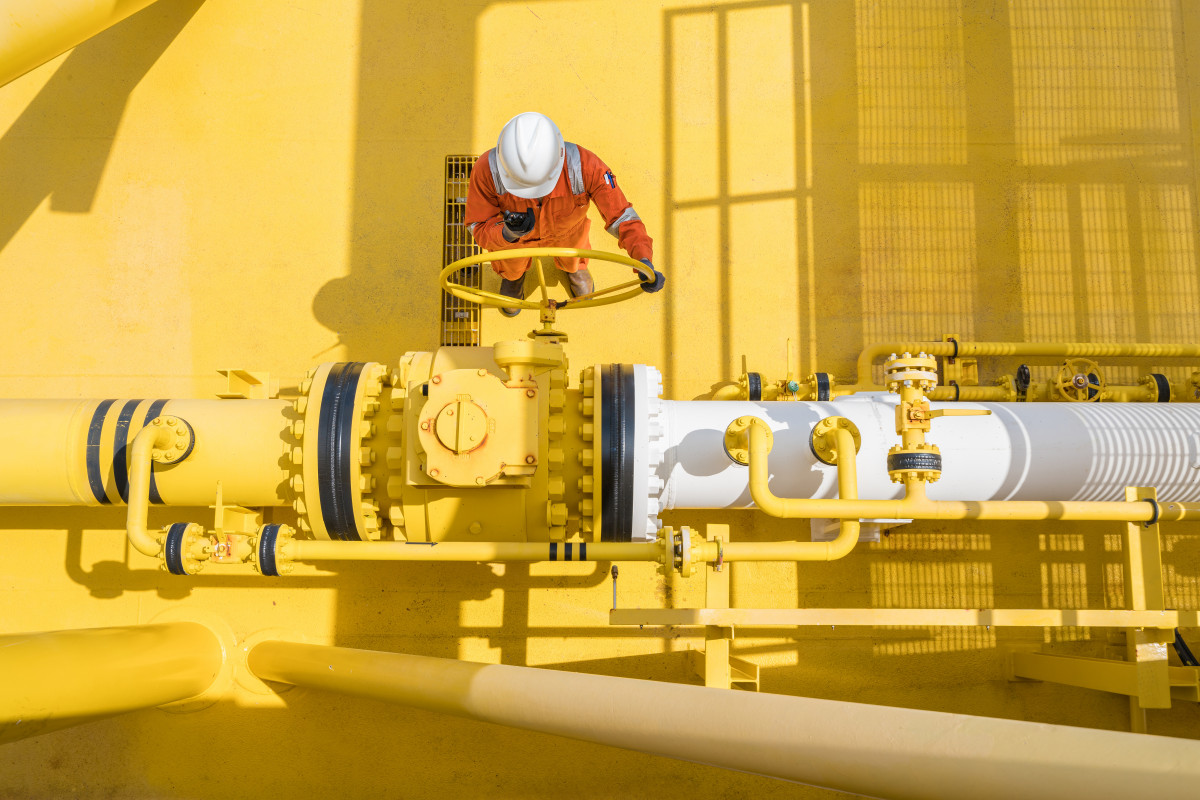 Since Putin is waging war on Ukraine, turning off the gas taps between Europe and Russia is a real possibility. Are Germany and the EU prepared? Photo: Adobe Stock.

As president Vladimir Putin continues to wage war in Ukraine and the U.S. is preparing to ban all oil imports from Russia, calls are getting louder for Germany and Europe to follow Washington’s lead. European countries are paying Russian energy suppliers close to one billion euros per day for coal, oil and gas, thereby indirectly financing Putin’s war chest. But the scale of mainland Europe’s dependence on Russian oil differs markedly from that of North America, and any decision to cut energy ties with Russia now will likely end supplies for years to come. This Q&A explores the conditions under which Germany could make itself independent from Russian fossil fuels.

What is the German government’s current position on implementing an energy embargo on Putin’s Russia?

Both German chancellor Olaf Scholz (SPD) and his minister for economy and climate Robert Habeck have repeatedly explained that Germany does not intend to ban the import of Russian oil, gas and coal. Since an embargo would have serious effects on the country’s economy, industry associations are warning against halting energy supplies from Russia altogether (see below). But calls from politicians and NGOs to do just that are getting louder. They argue that Putin’s war can only be ended by sanctions that cripple one of his main flows of income – energy sales to Europe. At the same time, it is also possible that Russia decides to reduce or halt energy deliveries.

Several groups of researchers and NGOs have in the past weeks come up with calculations on how Germany and the EU could get by without Russian energy, and what measures would be necessary to see this through (see scenarios below).

What fallout does the government fear from cutting Russian energy ties?

How dependent is Germany on Russian oil, gas and coal?

Germany is heavily reliant on Russian gas. Almost its entire natural gas consumption is covered by imports, around 55 percent of which come from Russia. Dependence on natural gas varies by sector. Most of the gas is used in the heating sector and for industrial processes, a smaller share is used to generate electricity. Around 45 percent of Germany’s hard coal imports come from Russia and the country also receives 34 percent of its crude oil imports from there. It is worth noting that these are 2020 figures, the percentages this past winter were already lower. 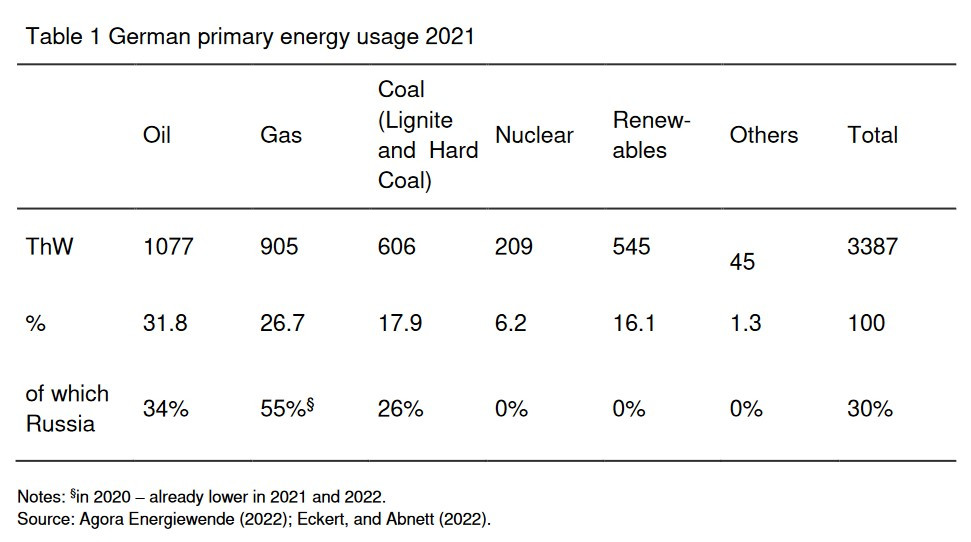 Source: Bachmann et al.: "What if? The Economic Effects for Germany of a Stop of Energy Imports from Russia", ECONtribute Policy Brief No. 028.

- How can gas imports be replaced?

Several papers published in recent weeks have concluded that up to and including next winter Germany (and Europe) could cover their electricity consumption for transport and heat generation through substitution, Europe-wide cooperation and efficiency measures without encountering severe shortages. The European Commission has drawn up a proposal as to how the bloc could reduce its dependence on Russian gas by 80 percent this year.

Agora Energiewende: Combining energy security and climate protection  - measures for the way out of the fossil energy crisis

Leopoldina: How Russian natural gas can be replaced in the German and European energy supply

Rüdiger Bachmann et al, ECONtribute: What if? The economic effects for Germany of a stop of energy imports from Russia”

Similar analyses on other European countries: Forum Energii for Poland; Greenpeace AT for Austria; Regulatory Assistance Project (RAP) for the UK; ECCO climate for Italy; NVDE for the Netherlands;

In short, this would require:

1) the short-term diversification of German and European gas supply (e.g. by importing more from Norway, North Africa, the Netherlands) and using the full capacity of European LNG terminals for deliveries from the U.S. and Qatar. This would entail considerably higher prices for gas than before the war.

2) ensuring that storage facilities are adequately filled for next winter (both the German government and the EU are already working on this). Existing gas storages at peak capacity cover Germany’s full demand for 90 days. Researchers suggest therefore that storages should be filled quickly and continuously and in the medium term storage capacities should be expanded.

3) energy savings / more energy efficiency on the demand side, e.g. in heating homes 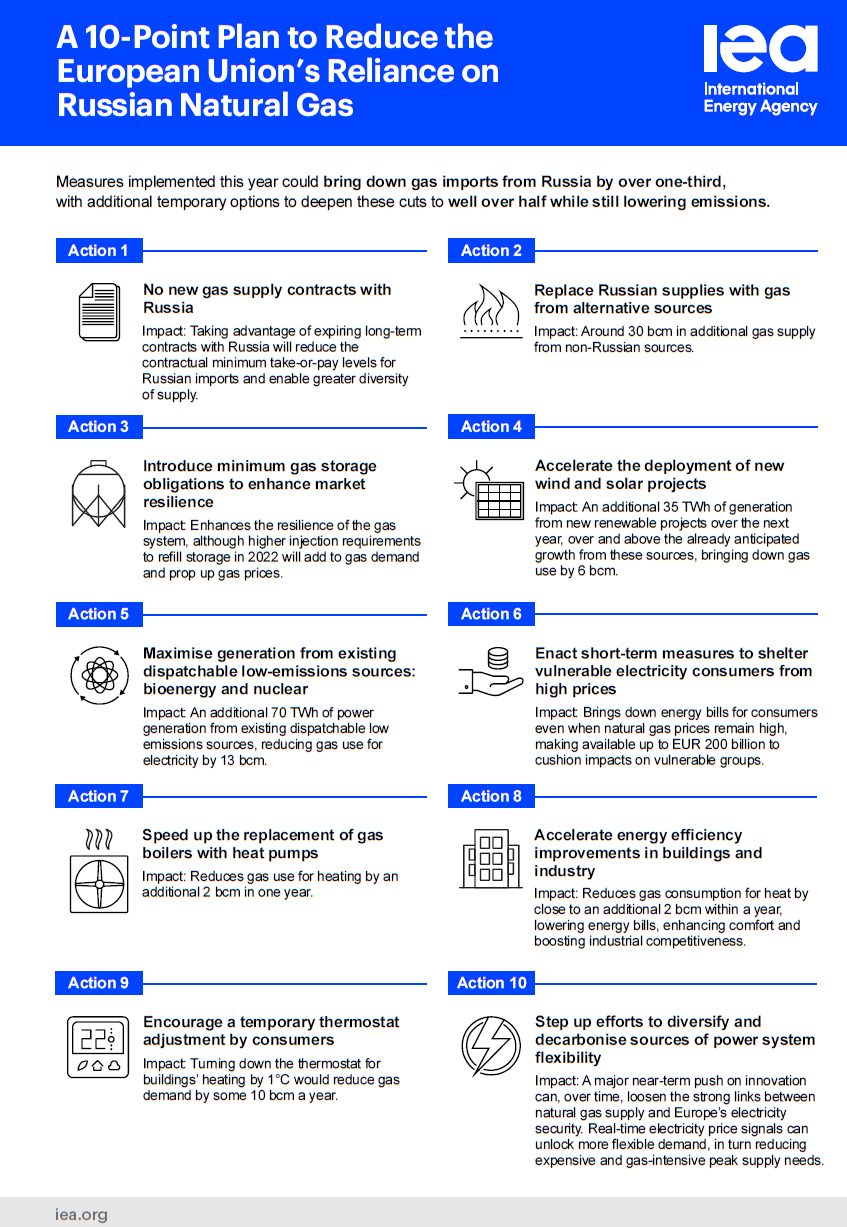 Consultancy Aurora Energy Research has estimated that with all available alternative sources of imports (e.g. more deliveries from North Africa, Norway, the Netherlands, or LNG), gas supplies to Europe next winter would be 11 percent below this past winter’s level if Russian gas supplies ceased entirely. Gas prices would be high as Europe would have to compete with others for LNG shipments. Bridging the gap would require the extension of storage capacity. The most effective measures that could help cope with supply disruptions in the short term include using coal instead of gas in the electricity sector and in industry, and introducing energy saving measures in the heating sector. For the winter 2022/2023, Europe could thus reduce gas demand by up to 14 percent, the consultancy concludes. 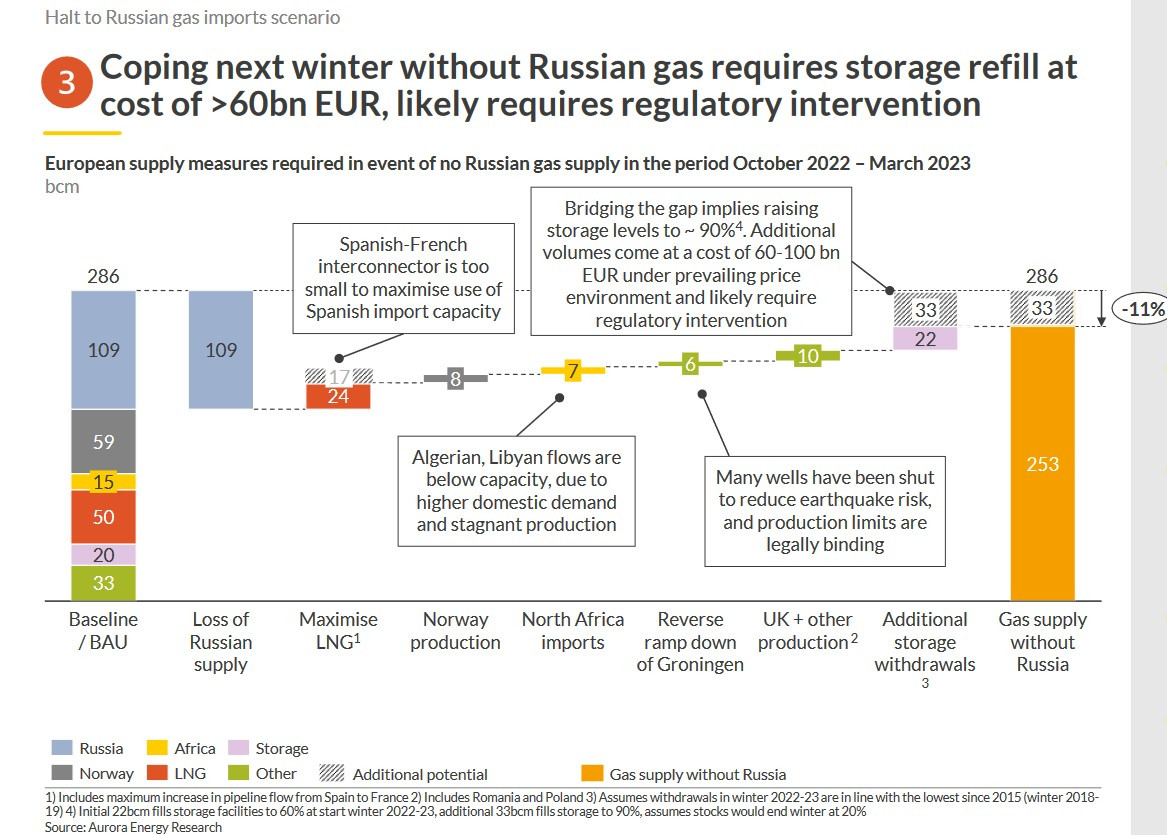 - What are the implications for the power sector?

- What are the implications for the heating sector?

- What are the implications for households and businesses?

Nine economists and energy experts published a paper on 7 March titled “What if? The economic effects for Germany of a stop of energy imports from Russia” and found that a complete halt of Russian gas supplies would have the following implications for households and businesses:

Aurora Energy Research finds that reducing industry’s gas consumption and fuel switching would free up a considerable amount of gas in the short term. However, it notes that “only a limited number of industrial players can rapidly switch boiler fuels from gas to coal or oil” and there is the risk of lost productivity, economic impacts and a setback in decarbonisation efforts. Also, cutting industry’s gas consumption would be costly and would have a negative impact on the country’s GDP, making it one of the most expensive coping measures.

In the long term, Germany’s industry should function on the basis of green electricity and hydrogen (e.g. green steel production).

Scenario: Embargo on oil from Russia

About one third of Germany’s and one quarter of the EU’s oil imports originate from Russia. In 2021, the country imported 24.2 million tonnes of crude oil and 5.1 million tonnes of oil products with a total value of 12.3 billion euros, according to the Federal Statistical Office (Destatis). Most of the imported oil is burned as petrol and diesel in transport, another large part is used in private oil heating systems.

Unlike natural gas, where substituting Russian imports is harder for Germany and Europe (see above), replacing Russian oil imports “will likely not pose a major problem,” a paper by energy policy researchers says. However, oil prices will likely remain highly volatile, the researchers warn.

Sufficient stocks of oil are available on the world market, and the import routes are not limited by a pipeline network as they are with gas. Only eight percent Europe’s total oil supplies come through Russian pipelines, which means that it is possible to obtain oil from other countries at short notice, an analysis by NGO Transport&Environment finds. Germany already has a 90-day oil reserve in place.

Nevertheless, stopping the established Russian supplies will have an inevitable effect on prices. Global oil prices have doubled since 2021 and prices for diesel in Germany have already risen to unprecedented heights. In an effort to cut Germans’ energy use, politicians have proposed to repeat the “car-free Sundays” of the 1973 oil crisis.

Greenpeace Germany has proposed 10 emergency measures that could quickly reduce the use of oil by ten to 12 percent. These include a general speed limit, the accelerated installation of heat pumps and the extension of the home office obligation.

The Federal Environment Agency (UBA) has said that reducing the maximum speed on motorways to 100 km/h and to 80 km/h on other roads would save around 2.1 billion litres of fossil fuel or 3.8 percent of the fuel consumed in the transport sector.

In the long term, the switch to e-mobility and hydrogen in transport are to wean Germany off its thirst for imported oil products.

About 45 percent of Germany’s hard coal imports originate from Russia. Three-fifths of these were used in the steel industry and five-eights in public electricity generation in 2021. As is the case with oil, Germany and Europe could relatively easily substitute hard coal from Russia with shipments from other countries. And Russia has already reduced hard coal deliveries, which has pushed up prices significantly, the German coal import association VDKI told energate messenger. Russia reduced its exports to Germany even before its attack on Ukraine, the association said, and although the lower volumes were substituted with coal from South Africa, markets remain highly volatile. The price for hard coal shipments to Europe almost doubled to 264 euros between the end of February and the beginning of March. Germany’s economy and climate ministry said that reserves at power stations are sufficient to last until the end of April.

How did industry and businesses react to a possible German/European energy embargo on Russia?

The Federation of German Industries (BDI) considers it impossible to replace Russian energy imports overnight and warns against “dramatic” effects on Germany’s economy if it should be attempted. BDI president Siegfried Russwurm said that discussing an energy embargo on Russia means “playing with fire.”

Industry association Zukunft Gas has warned that Germany’s GDP would fall by about 0.7 percent in the event of a gas shortage of 10 percent and said that not all gas-intensive processes are easy to replace. “Many of the gas-based process steps are elementary components of the German core industries of vehicle manufacturing or chemicals," managing director Timm Kehler told Frankfurter Allgemeine Zeitung.

German energy industry association BDEW has also cautioned against “unforeseeable consequences” and “massive negative effects” for consumers and the economy if Germany decided to embargo Russian energy supplies. “As things stand today, we can only partially replace imports of Russian natural gas. Alternatives, such as liquefied natural gas, can help make up for missing quantities. However, options such as biogas are also only available to a limited extent. The construction of two LNG terminals, an increase in the volume of imports from other countries and a sustainable safeguarding of the filling levels in the gas storage facilities are indispensable,” BDEW head Kerstin Andreae said.

Energy crunch - How does it affect Germany’s climate policy & what can be done?