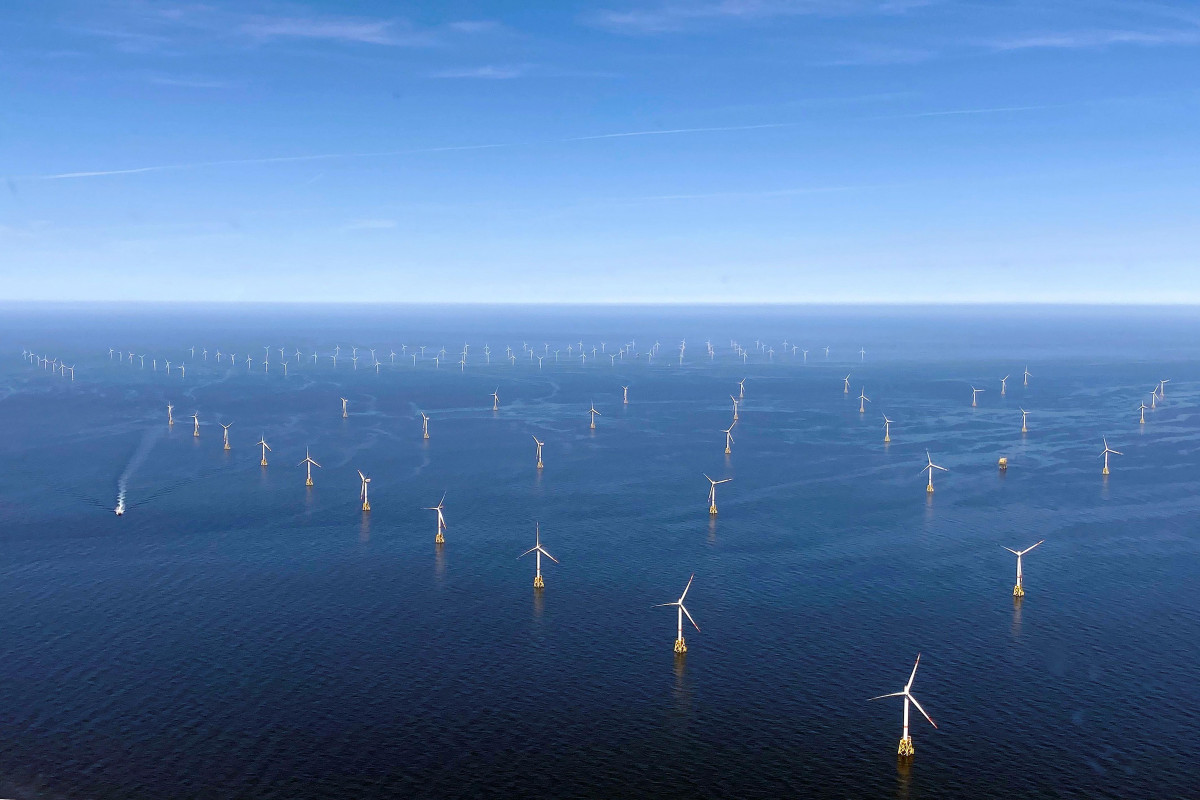 Germany’s government has initiated the first steps of a wide-ranging renewables reform that should make the country’s power supply almost 100 percent renewable by 2035. In a draft paper seen by Clean Energy Wire, the economy and climate ministry proposes higher renewable capacity targets for 2030, aligning the German clean energy path with the 1.5°C warming limit. In a novelty move, the ministry will legally oblige power suppliers to reduce bills for consumers after the levy for renewables on the power price is scrapped in July 2022. The ministry’s plans were well-received due to their potential for ridding the country of its dependency on imported fossil fuels and for accelerating the decarbonisation of all sectors, but questions were also raised as to how the government will actually put all the extra gigawatts of renewables capacity on the ground. In a reaction to the possible reduction or stop of Russian gas deliveries to Germany, minister Robert Habeck said that there would be no taboos when looking into supply security, but that using imported coal for longer or letting existing nuclear plants remain online were unlikely to be feasible solutions. [Update: Adds details on planned renewables reform and reactions from industry]

Amid Vladimir Putin’s war against Ukraine and the energy supply repercussions it has for Germany and the rest of Europe, the climate and energy ministry in Berlin will propose a faster expansion of renewable energy capacity, in order to reach a near 100 percent renewable power supply by 2035. The plans – seen by Clean Energy Wire – will be voted on by ministries as of this week and are scheduled to be decided by the government cabinet on 9 March before proceeding through the parliamentary process.

The Renewable Energy Act (EEG), which until now aimed for full renewable supply “before 2050,” will be amended to reach up to 110 gigawatts (GW) of onshore wind capacity by 2030 (more than double the amount running at present), 30 GW of offshore wind (almost four times more than today) and 200 GW of solar PV capacity, also almost four times more than currently exists. Tender volumes under the EEG will have to be adjusted to reflect the higher target capacities. The proposal is part of the government’s climate emergency programme (easter package) which was announced in January.

With these changes, “Germany is thus consistently aligning the expansion of renewable energies with the 1.5°C climate protection path”, says the ministry paper.

Government auctions that reward the lowest bid by giving them a guaranteed feed-in payment will remain in place. But for ground mounted solar PV and some offshore wind installations, the ministry proposes gradually entering into a “contracts for difference” (CfD) scheme. With this, a minimum payment is guaranteed per kilowatt-hour to an installation, but if the operator can sell their electricity at higher prices then they must refund their income above the minimum revenue.

Other changes include exceptions from the tendering process for citizen-run renewable projects and increased payments to small solar rooftop installations. It will become easier for municipalities to benefit financially from onshore wind and ground-mounted solar PV installations. A controversial provision that used to automatically reduce solar subsidies the more capacity additions boomed will be abolished. Instead, the ministry will be able to “manually” change renumerations for small solar PV by ordinance. Bioenergy subsidies will be more strongly focused on “highly flexible peak-load power plants so that bioenergy can increasingly play to its strengths as a storable energy source and make a greater contribution to a secure power supply”, the proposal says. 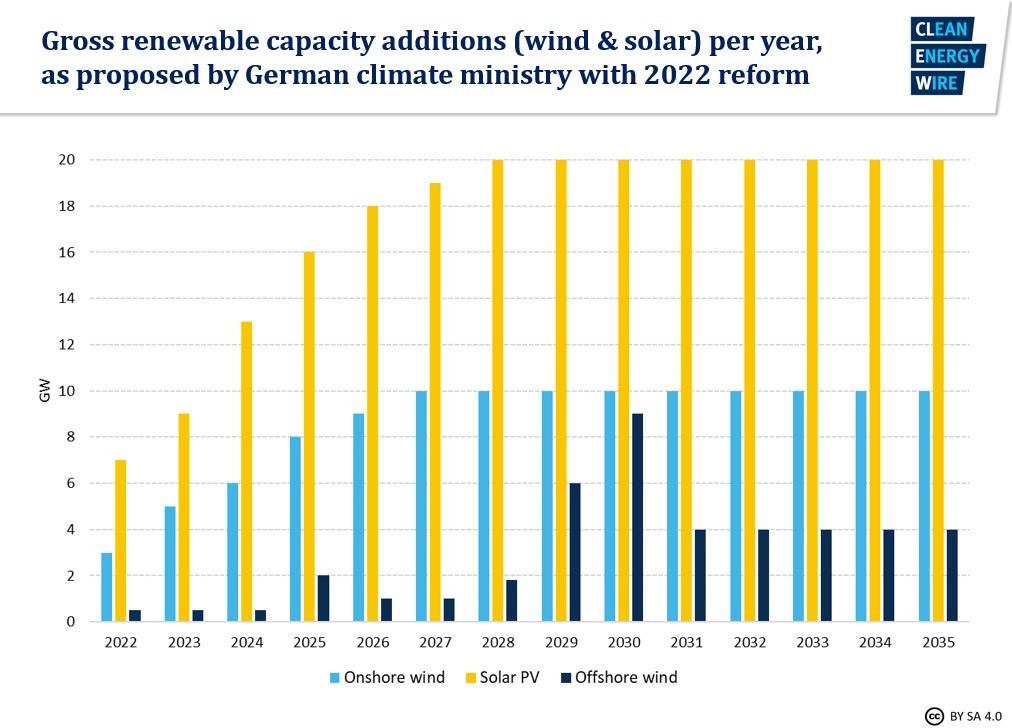 “Bringing forward the full supply of renewable energies in the electricity sector to 2035 is ambitious, but feasible and, above all, important,” said the president of Germany’s renewable industry association BEE, Simone Peter. “With this, we are finally getting back on track with the energy transition."

Robert Busch, managing director of the Association of Energy Market Innovators (bne), said that “rapid decarbonisation in the electricity sector is crucial in order to get off the drip of fossil energy imports more quickly also in the heating and mobility sectors.” To achieve this, everything has to be done to immediately accelerate the expansion of renewable energies, the necessary system flexibility, and storage facilities, he added.

One of the biggest concerns of Germany’s energy transition is the slowed-down expansion of onshore wind in recent years and some commentators noted that the new, higher capacity targets by no means mean that such big volumes will actually be built, also partly due to an increasing lack of skilled labour. In its proposal, the climate ministry acknowledges that “the main obstacles to onshore wind cannot be solved in the Renewable Energy Act itself,” adding that it would tackle obstacles such as conflicts between wind and nature conservation and the species protection law, planning law or insufficient land use designations with a separate Onshore Wind Act this summer.

The BEE’s Simone Peter said that by streamlining planning processes, the installed capacity of wind energy and photovoltaics can increase rapidly.

The ministry also follows up on an earlier government decision, of scrapping the renewables surcharge that consumers pay with their power bills as of July 2022, saving them around 6.6 billion euros per year (3.7 cents per kilowatt-hour). This is in aid of relieving households from increasing energy costs due to the highly volatile gas and power markets and should help with using more electricity in all sectors, including heating and transport (sector coupling). In a novelty move, the government will legally oblige power suppliers to actually lower their price per kilowatt-hour by this amount (3.7 cents) to ensure that the measure benefits consumers.

Economy and climate minister Robert Habeck told public broadcaster ARD  on Sunday (28.2.) that his department would look into all options in response to the likely decrease or stop in Russian fossil fuel deliveries to Germany – in particular of natural gas. These include a longer run-time of nuclear and coal power stations. He said that there should be “no taboos” on this in order to secure Germany’s energy supply.

Germany has a legal phase-out date for coal power in place for 2038 which the government has pledged to bring forward to 2030 if possible. The last remaining nuclear power stations are to be taken offline by the end of this year. Habeck said that letting coal plants run longer “means a longer dependence on hard coal from Russia”, while buying coal elsewhere would create a dependency on other countries. Regarding nuclear, the Green Party minister - whose party is in staunch opposition to nuclear energy - said that he wouldn’t “ideologically reject” letting existing plants run longer but that his ministry’s initial examination had shown that “for the winter of 2022/23 nuclear power would not help us”. Preparations for the upcoming shutdowns are so far advanced, he said, that the nuclear power plants can only continue to operate "under the highest safety concerns and possibly with fuel supplies that have not yet been secured".

Habeck said that Germany’s gas supply was secure for this winter and throughout the summer without Russian gas. But for the coming winter, the procurement strategy had to be extended considerably. “The most important step would be to curb our gas-hunger. We will very soon present a gas-reduction plan, in order to reduce our vulnerability,” he said.

[A first version of this article was published on 28 February]