The COVID-19 pandemic is leading German companies to rethink the need for business trips and promote video conferencing instead, according to a report by news agency dpa carried by WirtschaftsWoche. Since the coronavirus outbreak, however, meetings that often used to be organised by participants flying in until just a few months ago are now taking place as video conferences and largely accomplish the same goals, forcing companies to assess whether such travel is really necessary, the article says. Leading German corporations, from Deutsche Post, Deutsche Telekom and Deutsche Bank to RWE, Rheinmetall, Thyssenkrupp and Bayer, all agree that after the coronavirus pandemic, there will not be as many business trips as before. "The pandemic acted as a catalyst here and gave virtual cooperation a further boost," said a spokeswoman for postal service Deutsche Post. A spokesman for leading armament manufacturer Rheinmetall said the number of telephone and video conferences conducted at the company had increased six-fold in the past four months, while travel costs had dropped by some 80 percent in the same period. However, despite advantages, like saving money and time, greater availability at short notice and increased climate protection, a limited number of in-person meetings will remain necessary for many companies. "It is clear that virtual conferences cannot completely replace personal contact," said a BMW spokeswoman.

A recent study by the Fraunhofer Institute for Industrial Engineering confirmed the trend: Virtual meetings are expected to become more natural to organize going forward, with nearly 90 percent of 500 German companies surveyed indicating they will more critically question the importance of business trips in the future. Fraunhofer called the results "impressive," saying the German economy would currently be undergoing "a large-scale experiment on the digitalisation of work" whose speed would have appeared "unthinkable" until only recently.

While the coronavirus outbreak and the subsequent lockdowns in many countries around the world have created major economic upheaval, many say it also offers an opportunity to rethink business practices and put them on a more sustainable footing, for example through green recovery programmes that specifically support more sustainable activities. However, while emissions have gone down around the globe due to production halts and drastically reduced mobility, the pandemic has also created adverse effects for the enivronment, for example due to people shunning public transport in favour of their personal car. 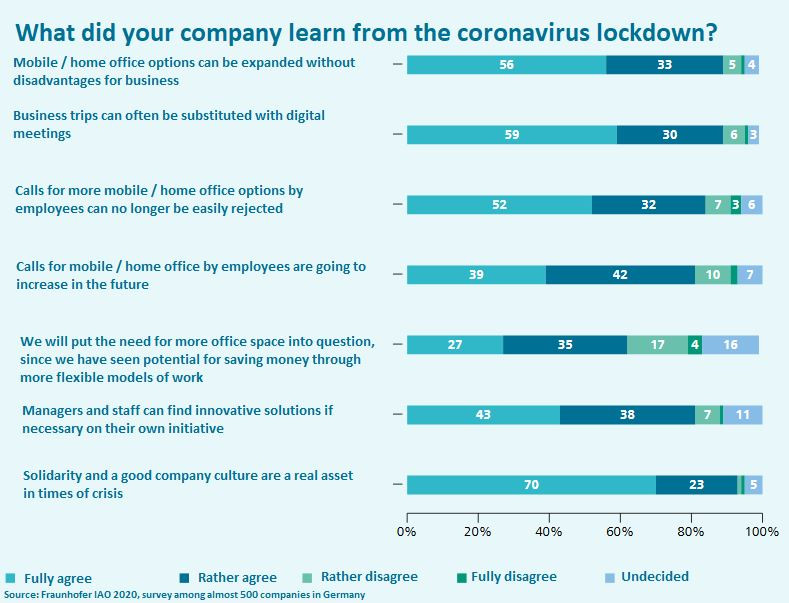