German energy use on the rise after pandemic dip, natural gas top source for first time 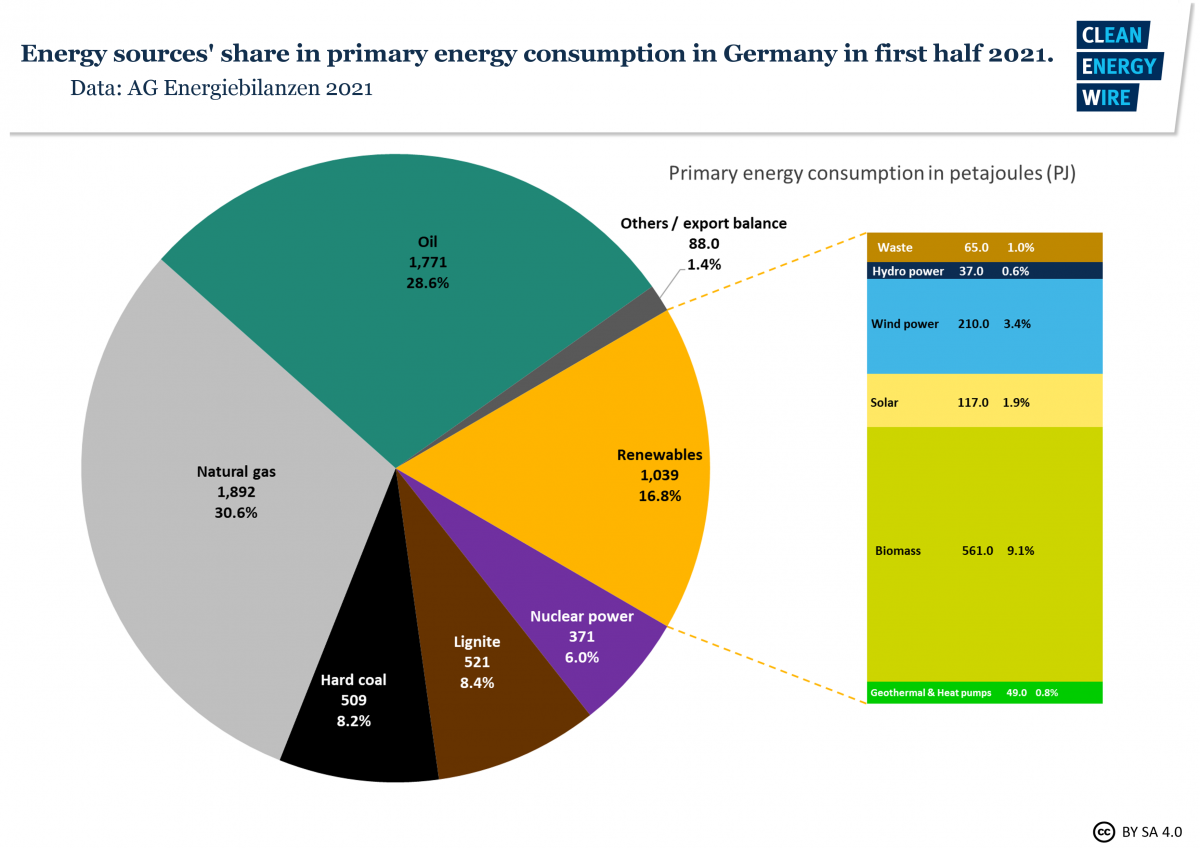 Germany's energy use in the first half of this year exceeded 2020 levels, as the economy recovers from the effects of the coronavirus pandemic, figures by energy market research group AG Energiebilanzen (AGEB) show. However, total energy consumption from January until June remained 7 percent below pre-pandemic levels in the first half of 2019, when adjusted for temperature. Natural gas was the most important energy source for the first time, with a share of more than 30 percent. While fossil power production rose considerably compared to last year, it remained below 2019 levels for all sources except natural gas, additional figures from energy industry association BDEW show. The challenges for the transformation of the country's energy system towards renewable power sources became visible in the first half of 2021, when little wind and cold weather let green power production decrease. As fossil energy use increased, energy-related CO2 emissions rose by 6.3 percent compared to the same period the previous year, the researchers said. [Update adds Tagesspiegel comments]

The total energy consumption in Germany has risen considerably in the first six months of 2021, as the country's recovers from the coronavirus pandemic and its quashing effect on economic activity and energy use. According to preliminary figures by energy market research group AG Energiebilanzen (AGEB), Germany's energy use increased by 4.3 percent between January and the end of June compared to the same period 2020. However, when adjusted for the effects of cold weather in the first half of the year, the 2021 figure of 6,191 petajoules (PJ) still was 7 percent lower than during the same period 2019, when energy use was not yet influenced by the coronavirus. Due to a sharp decline in wind power output and a long and cold winter, natural gas became the country's most important energy source for the first time, providing 30.6 percent of the mix, said AGEB.

The question of how Germany can achieve a more green recovery in the wake of COVID-19 has been raised early on in the pandemic due to fears a focus on fast growth could undermine emissions reduction achievements in recent years. While the shifts in social and economic behaviour during consecutive lockdowns helped the country to achieve its 2020 emissions reduction target of 40 percent lower emissions than 1990, the speed of renewables construction and phase-out of the most polluting fossil power plants is likely not happening fast enough to sustain the reduction path influenced by the pandemic, also because the country is set to lose its remaining low-emissions nuclear power capacity by the end of 2022.

The overall share of non-renewable energy sources in the country's mix was growing in 2021, with hard coal spiking by nearly a quarter and that of lignite by almost a third, AGEB said. However, despite the strong growth compared to 2020, lignite use was still 12 percent lower than in 2019, it added. The share of both types of coal stood at around 8 percent. Nuclear plants produced 7 percent more electricity than in the year before while natural gas use for power and heating grew by 16 percent. Contrary to other fossil fuels, the use of mineral oil continued to drop in 2021, with consumption being 12 percent lower than in 2020, meaning oil's share in primary energy consumption fell below 30 percent for the first time ever, the research group said.

Weather conditions also had a dampening effect on the share of renewable sources in the country's energy mix. Due to little wind in the first half of 2021, the renewables share in primary energy consumption fell by 1 percentage point, from 17.7 to 16.8 percent. Wind power saw its output drop by 20 percent compared to the particularly windy previous year, whereas solar power's contribution remained stable and that of hydropower and bioenergy grew by 5 and 6 percent, respectively. 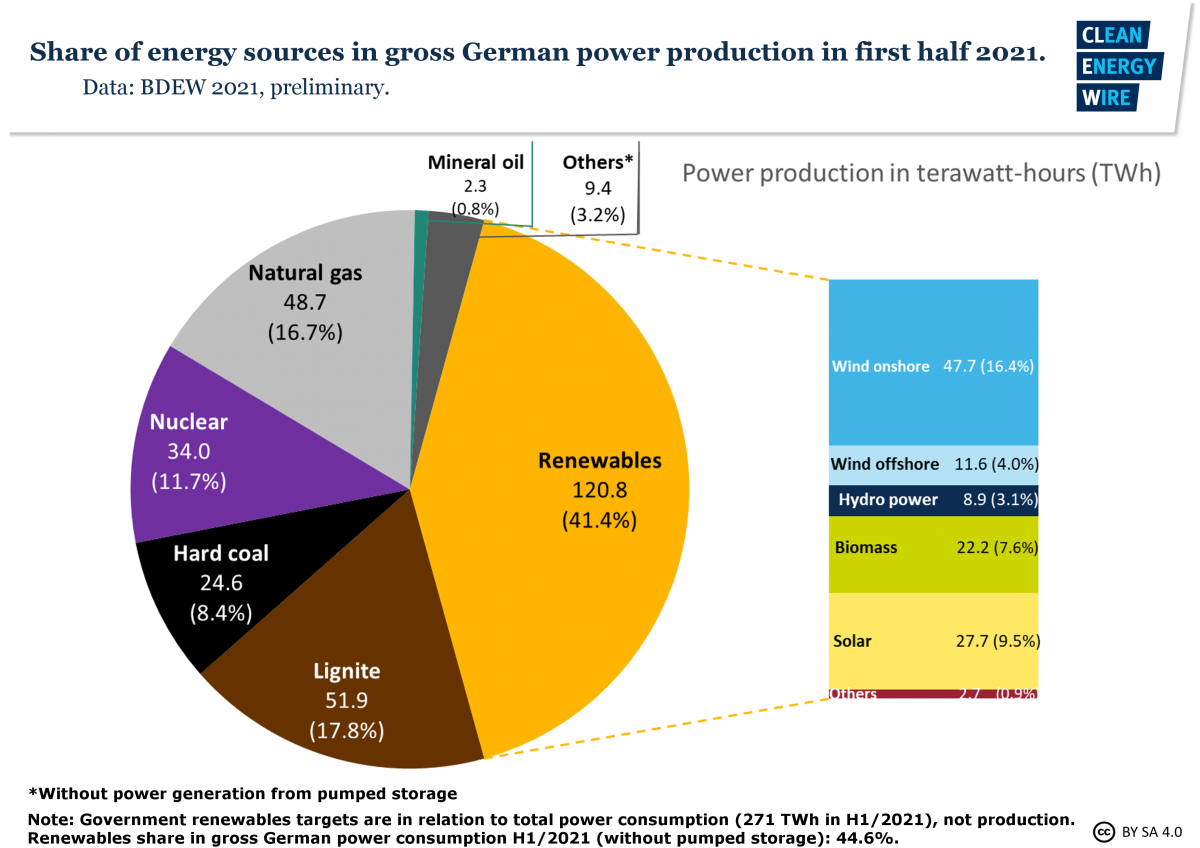 CO2 emissions on the rise

Additional figures by energy industry association BDEW showed that while fossil power production rose considerably compared to last year, it remained below 2019 levels for all sources except natural gas.

As fossil energy use increased, energy-related CO2 emissions rose by 6.3 percent compared to the same period the previous year, the researchers said.

This development comes as little surprise, said Phillipp Litz, energy expert at think tank Agora Energiewende. CO₂ emissions had declined last year largely due to special effects, he said. "The main reasons for this year's increase are the decline in wind power generation compared to the long-term average and at the same time a higher demand for heating due to colder temperatures," he said. In addition, energy consumption had recovered due to the easing of lockdown measures in the wake of the pandemic.

Litz said that in order to reduce greenhouse gas emissions by 65 percent by 2030 compared to 1990 - the target laid out in the climate action law - the next federal government must take sustainable countermeasures in the first 100 days in office. "We need a tripling of the expansion of renewable energies, an earlier coal phase-out and an end to combustion engines and oil and gas heating," he said.

The next federal government after the September election will likely start with a “considerable mortgage” on the road to the 2030 greenhouse gas reduction target, writes Jakob Schlandt in Tagesspiegel Background. Should the emissions increase for the whole of 2021 be as large as it was in the first six months, the country would “clearly miss” its 2020 climate target. There is no overall greenhouse gas reduction target for 2021, but sectors like transport, buildings and agriculture have individual targets.