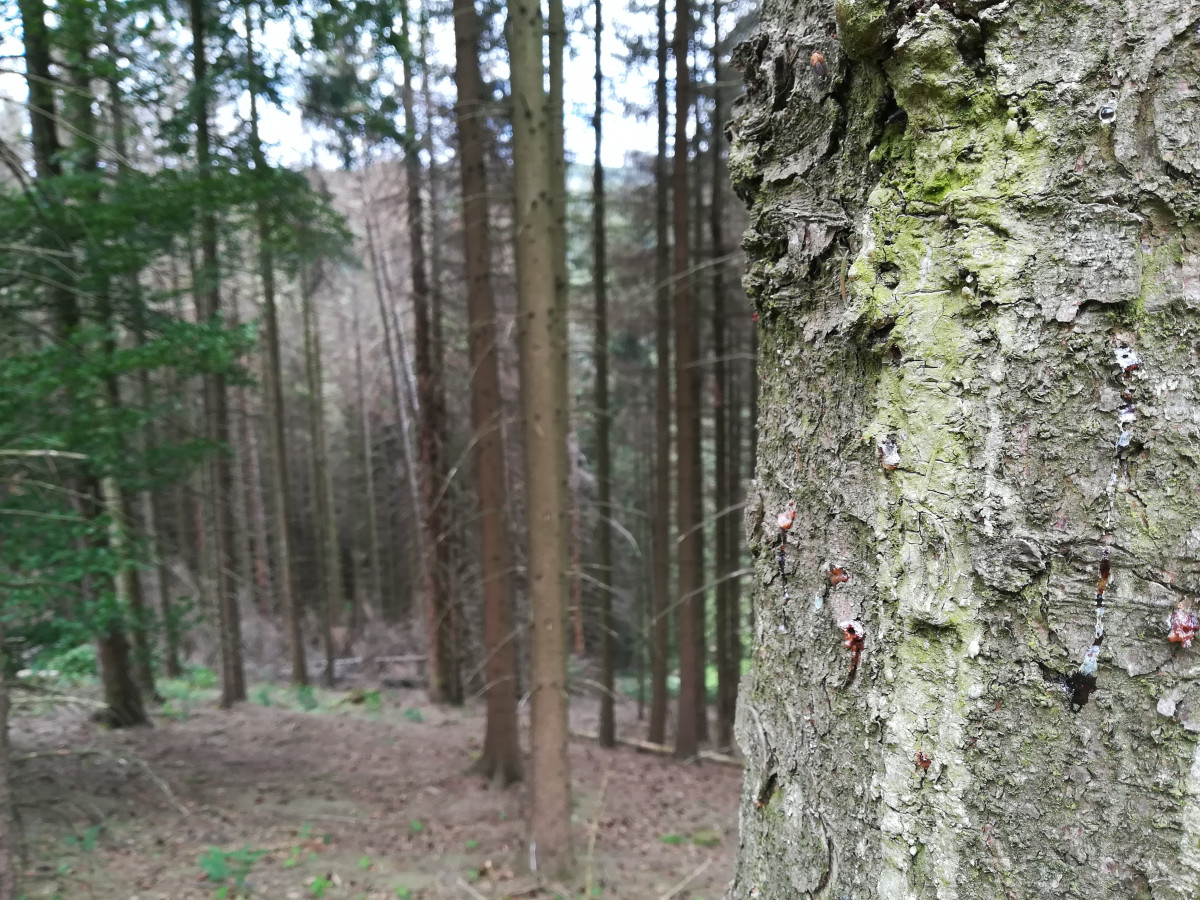 Bark beetles have an easier target with forests weakened by drought, such as here in the German Sauerland region. Photo: CLEW/Wettengel.

German forests have been damaged heavily by droughts, bark beetle infestations, storms and forest fires in recent years. In 2020, more surveyed trees died than in any year before, said the Forest Condition Report 2020 by the agriculture ministry. The German government has set up a 1.5 billion euro support programme to help forest owners with reforestation, coping with damage and adjusting the forest to the changing climate. [UPDATE adds reactions from CSU/CDU parliamentary group and Potsdam Institute for Climate Impact Research]

Germany’s forests have been greatly damaged by extreme weather events, according to the new Forest Condition Report 2020. The past three years of droughts, massive bark beetle infestations, storms and recurrent forest fires have caused long-term damage to the country’s forests, the report says. More surveyed trees died in 2020 than in any year before, according to the survey. Four out of five trees have thinning crowns, and around a third of trees are experiencing significant thinning.

“The crown condition is like a clinical thermometer - it shows how the trees are doing. Our forests are sick,” German agriculture minister Julia Klöckner said during a press conference. The government has set up a support programme worth 1.5 billion euros to help private and municipal forest owners cope with forest damage, invest in reforestation and adapt forests to climate change. The area to be reforested is 277,000 hectares, the ministry writes.

Albert Stegemann, the agricultural policy spokesman of the CDU/CSU parliamentary group, notes that the Christian Democrats have supported the introduction of the 500 million euro sustainability premium intended to support forest owners in the necessary forest conversion. “This has got off to a very good start,” Stegemann said. “In the period from December 2020 to mid-February 2021, around 80,000 applications with a total amount of over 300 million euros have already been received,” according to Stegemann.

“Climate protection is forest protection: we must quickly reduce greenhouse gas emissions,” said Christopher Reyer, head of the Forest Resilience Working Group at the Potsdam Institute for Climate Impact Research (PIK). “In some cases, there are conflicting goals between nature conservation and wood use that need to be addressed. There can be no either/or, but rather - and this is difficult - a differentiated, regionally varying, adapted, sustainable forest management is needed,” Reyer added.

Back in 2019, Klöckner brought together all stakeholders at the 'National Forest Summit' and warned that the country’s forests – its “most important ally for climate action” - are in danger. The minister then announced plans for large-scale reforestation to improve the “grave state” of German forests. “If we lose parts of our forests, it will be difficult for us to compensate for this loss with other climate action measures,” the minister said then. Although climate change was a main driver of the droughts of 2018 and 2019 that have damaged the German forests, addressing the problem requires more than just tackling global warming, Alexander Marx, hydrology researcher at the Helmholtz Centre for Environmental Research (UFZ), has previously told Clean Energy Wire. Adaptation to droughts needs to be tackled at the regional or local level due to the differences in soil structure and microclimates, Marx said.

Since forests act as natural carbon sinks, they can play an important role in reducing emissions to reach climate targets. Last autumn, the European Commission proposed including land use, land use change and forestry (LULUCF) in its 2030 emissions target. However, doing so would entail problems for the governance of the emissions system, climate economist Felix Matthes told Tagesspiegel Background. Ecologists also doubt whether forests can be relied on as an instrument to reduce emissions mainly due to the side effects of climate change with which the trees have to contend, Süddeutsche Zeitung writes based on a study conducted by the European Commission's Joint Research Centre.