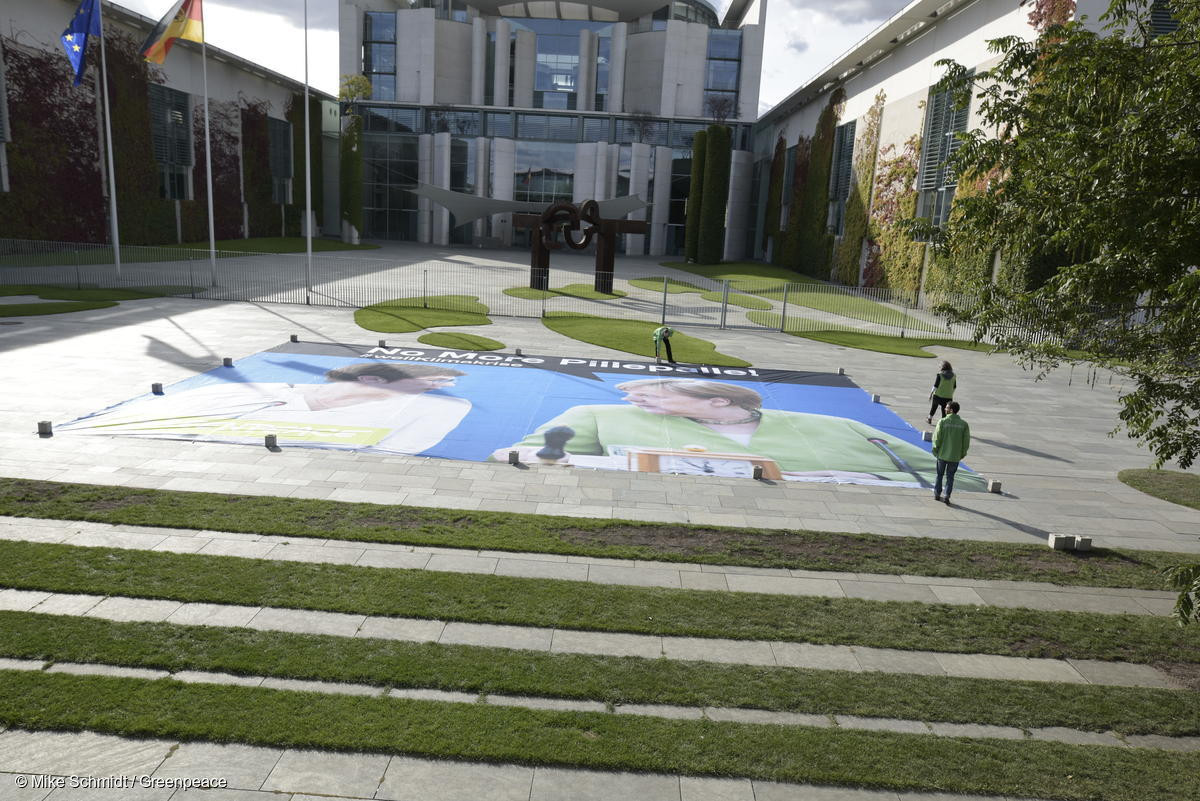 Greenpeace activists protest for an end of the government's piecemeal approach to climate policy in front of Angela Merkel's chancellery. Photo: Mike Schmidt/Greenpeace 2019.

Germany's governing parties are heading into the final talks over what finance minister Olaf Scholz has said must be a "big and convincing step for climate action." But CO₂ pricing and a proposed major framework climate law remain sticking points, a draft "Climate Action Programme 2030" suggests. Meanwhile, doubts among analysts and commentators grow about whether Chancellor Angela Merkel's government will succeed in ending what has so far been its "piecemeal approach" to the climate challenge. Coinciding with the "Global Climate Strike," the country's climate cabinet is set to agree on the package on Friday. [Note: This story is part of Covering Climate Now, a global collaboration of more than 250 news outlets to strengthen coverage of the climate story.]

A long night could be ahead for the party leadership of Chancellor Angela Merkel's conservative CDU/CSU alliance and the Social Democrats (SPD), who plan to meet to get major remaining points of dispute out of the way ahead of the government's final climate cabinet meeting on 20 September.

A draft of the planned "Climate Action Programme 2030" suggests the grand coalition has yet to decide on a system for CO₂ pricing in transport and buildings. The text, dated 16 September and seen by Clean Energy Wire, also shows disagreement over whether to set 2050 as a target year for German climate neutrality, and whether to introduce a framework Climate Action Law to make the country's climate targets legally binding.

Chancellor Merkel's government coalition is racing to put together a major climate action package by 20 September, just in time for UN Secretary-General António Guterres' climate summit in New York on 23 September. The shaky grand coalition must mould a myriad of party and ministry proposals on how Germany could reach the 2030 climate targets into a joint strategy.

After a prolonged boom in renewable energy, Germany's planned transition to a low-carbon, nuclear-free economy – the famed Energiewende – has slowed in recent years. Emissions remain too high to reach the climate targets, renewables expansion has slowed, and initiating changes in sectors such as transport has proven to be extremely difficult. Chancellor Merkel has therefore set up the so-called climate cabinet – a group of ministers with responsibilities in key climate policy fields – to decide necessary legislation to reach the 2030 climate targets, as promised in the 2018 grand coalition government treaty.

As large parts of the German public call for more ambition, politicians have upped their rhetoric. Against the backdrop of a planned global climate protest, including protests announced in more than 500 German towns and cities, 20 September will show whether Merkel' government can walk the talk on climate.

As climate concepts drafted by government parties and ministries have been published or leaked over the past days, doubts by analysts and commentators have been growing that Germany would actually see the promised "big coup" and "end of piecemeal approach" promised by the grand coalition.

While supporting the goal of greenhouse gas neutrality in the EU by 2050, the climate programme's draft is not consistent in statements over whether to make Germany's official 2050 target net zero as well.

To reach its 2030 target of reducing greenhouse gas emissions by 55 percent compared to 1990 levels, Germany's emissions must fall by about 300 million tonnes CO₂ equivalent from 2018 levels. So far, the draft lists measures in all sectors with a combined reduction potential of only about 120 million tonnes.

These include the planned coal exit, renewables expansion, strengthening rail over road transport, tax support for the energy-efficient modernisation of buildings, and introducing a one-stop-shop investment support programme to increase energy efficiency in industry.

The draft lists additional measures, for some of which it is impossible to estimate greenhouse gas reduction potential, such as in sustainable finance, or educating the population about climate-friendly behaviour.

The draft states that the relevant ministries will be responsible for financing, implementing and monitoring respective measures. They will have to report to the climate cabinet about the progress of implementation.