Germany should introduce a price on carbon emissions for sectors such as transport and buildings currently not covered by the EU Emissions Trading System, the government’s top economic advisors have proposed. This would work as an interim solution with the goal of creating an integrated system in Europe with a single price across sectors. A carbon tax would be easier and faster to implement than another trading system, the advisors said. The advantage of another trading scheme would be easier communication and faster integration later on. In any case, proceeds from a tax should be handed back to citizens. Angela Merkel's chancellery had asked for the special report from the country’s top economists to inform her climate cabinet in the ongoing debate about a climate protection law.

The German government should establish a price for CO2 emissions in the buildings and transport sector, which is currently not covered by the EU Emissions Trading System, as a fresh start for the country’s climate policy, the government’s top economic advisors said in a special report. “The current debate offers the historic chance, to change the fragmented, expensive and inefficient German climate policy in a way, that CO2 pricing becomes the centrepiece,” said Christoph Schmidt, the chair of the German Council of Economic Experts, an independent body of five renowned economics professors that advises the government. A carbon tax would be easier and faster to establish, said the report, which Angela Merkel’s Chancellery had asked for to inform the ongoing debate about a German climate law. On the other hand, a separate new trading scheme would be easier to communicate and faster to integrate in the EU ETS later. The advisors stressed that any proceeds from a carbon pricing scheme should be handed back to citizens, either through a per-capita pay-out or a cut in the electricity tax.

After shying away from the debate for a long time, Germany's political leaders are finally considering putting a price on CO2 to help reach the country's climate targets. Chancellor Angela Merkel and her "climate cabinet" will discuss the economic advisor’s proposal on 18 July. Major parties and research institutes are all pitching their ideas for how a carbon price could be designed - whether in the shape of a CO2 tax or a trading scheme.

Climate economist Ottmar Edenhofer, whose MCC institute contributed expertise on the various options for the coucil's special report, said the question of how to get to CO2 price was ultimately secondary. “In principle, both options (tax or trading system) are expedient, so a war of opinions would be unnecessary,“especially since both are interim solutions," he said. 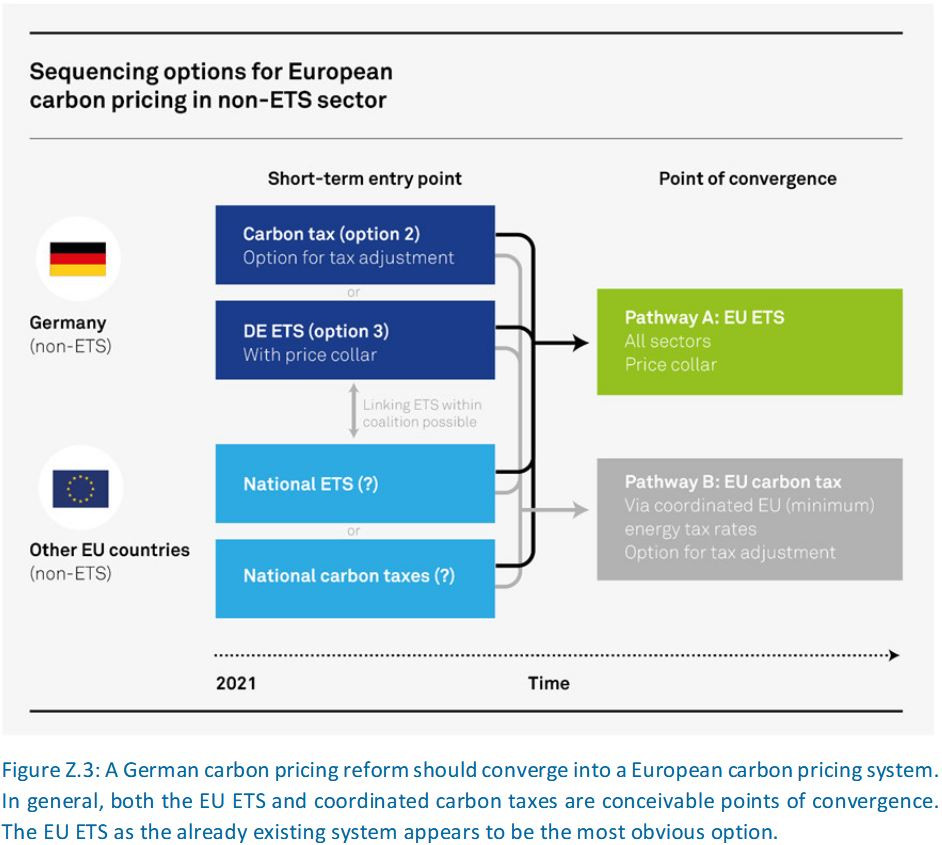 Merkel said in a statement that the council’s report “encouraged” the government to use market economy-based measures to reduce CO2 emissions. The decisions were not easy, but the government wanted to decide by the end of September.

NGO Germanwatch pointed out that twelve other European states have already opted for additional climate measures to the EU Emissions Trading System and that all of them chose a tax-based solution. Energy industry associations welcomed the council’s proposal, saying they supported a cut in electricity taxes to compensate citizens for price rises in other fuels. The German Association of Energy and Water Industries BDEW and German Association of Local Utilities VKU agreed on this point because it would boost the creation of an overall electricity-based energy system through a coupling of electricity production, transport and heating.

The government wants to present a climate protection law and measures to reach the country’s 2030 emission reduction targets in autumn. So far, Germany is at risk of missing the 2030 target in the non-ETS sector, which would mean significant cost because they are a binding part of the EU goals.

The economic advisors also stressed that a national price should only be an interim solution. Ultimately, sectors such as transport and buildings should be integrated in the European ETS and a globally coordinated approach to limit climate change remained paramount. Germany could use its readiness to take unilateral extra steps as a lever in international talks to get other countries to commit to more ambitious goals, they said.

The advisory council also highlighted that while the CO2 price should become the centre piece of climate policy, it was not a panacea. The government should support e.g. investment in low-emission equipment, invest in infrastructure and overhaul the tax system in general to increase the incentives to reduce CO2 emissions. Many experts and lobby groups have long called for a general revision of Germany’s complex system of energy surcharges, levies and taxes. 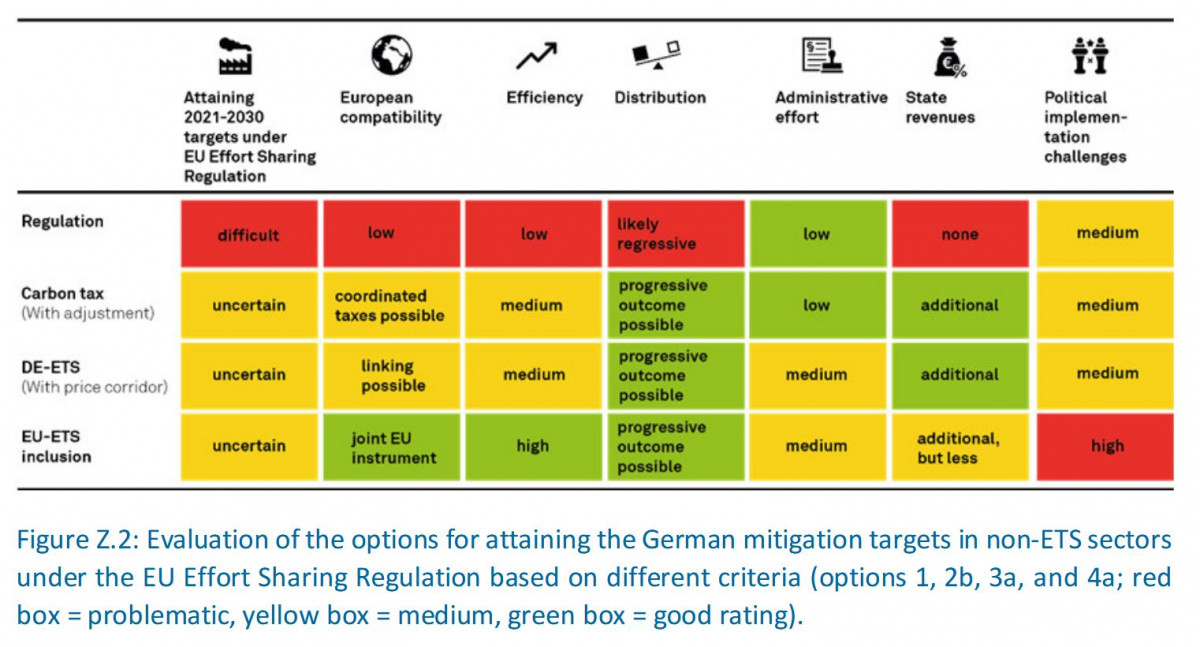 Council chair Schmidt pointed out that the ultimate integration of all sectors in the EU ETS would also make the planned coal phase-out unnecessary because this approach would lead to higher carbon prices and drive coal-fired power plants out of the market quickly. The measures to buffer the impact of structural change and to support weaker regions were still necessary, though those goals should not be coupled with climate policy, he said. A government commission has proposed a step-by-step coal phase-out by 2038, and the government is due to present the legal framework after the summer recess.

The mining union IGBCE urged the government to stick to the commission proposal in its reaction to the council’s paper. A CO2price was no panacea and the government should carefully weigh its effects against dangers to jobs and bureaucratic hurdles, the union said in a statement.

A uniform carbon price as part of a system integrated into the EU ETS would also make sectoral targets unnecessary, Schmidt said. Germany’s climate action plan 2050 so far also includes reduction targets for all economic sectors for 2030, something the Social Democrats fought hard for in the last legislative period and many environmental groups and energy transition think tanks supported.

Council member Isabel Schnabel said that politicians could use the payback of the proceeds to buffer any social impact from the CO2 price e.g. on poorer households and win and keep the public’s acceptance. However, such a reimbursement mechanism should not counter the desired effect to steer people away from CO2-intensive activities. Schnabel also explained that the council’s suggestion of a trading-based scheme with a minimum and potential maximum price for CO2 was aimed at curbing the risks of exaggerations in the market that may hurt either its impact or its acceptance with the public.

Most political parties have presented their own proposals for a carbon pricing scheme. Only Chancellor Merkel’s conservative CDU/CSU alliance has yet to come forward with its own plan. Especially the CDU’s business-oriented wing has so far rejected a tax solution. A group of 16 CDU parliamentarians now went ahead with a proposal that suggested a minimum price for CO2coupled with a market-based price element.

Get in touch if you have any requests, questions or suggestions.
Sven Egenter