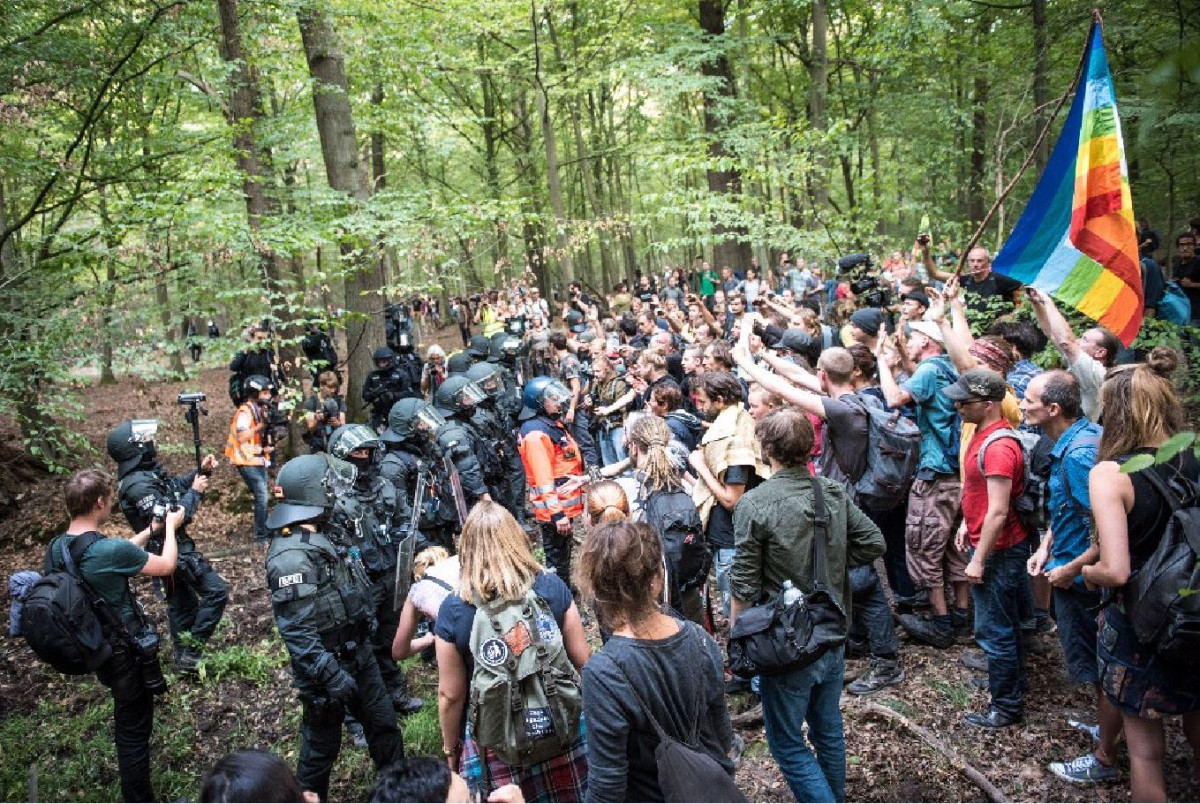 Leading members of Germany's Green Party have called on climate activists to cooperate in the country's general elections next year. They warn that more radical climate platforms competing in elections could harm the fight against climate change, as they could drain votes from the party that stands a good chance to become part of the next German federal government.

Less than a year before Germany's general election in autumn next year, the country's Green Party has launched a call for cooperation to climate action groups, reflecting growing concerns that an increasing number of more radical climate activists are drifting away from the Greens. "We agree on the goal - the rapid limitation of global warming," the leader of the party's parliamentary group, Katrin Göring-Eckardt, told Redaktionsnetzwerk Deutschland. "We Greens do what is possible and fight for every tenth of a degree. And yes, some think it's not fast enough," Göring-Eckardt said, adding "let's ensure that next year the political majorities are such that action can be taken more quickly."

The Green party is set to adopt a new policy programme at a digital party conference starting today. Climate change looks set to be a key issue shaping election policy, according to surveys. The Green Party is currently polling as the country's second strongest party and polls indicate the distinct possibility of a coalition with Chancellor Angela Merkel's CDU. But some members of Germany's climate movement, which includes student protest movement Fridays for Future, accuse the Greens of not doing enough to reach the target of limiting global warming to 1.5 degrees and instead making too many political compromises with its coalition partners at the state level, where the Greens are represented in the majority of governments.

"We are beyond the phase where we just complain"

Party head Robert Habeck told Hamburger Abendblatt the fact that some members of the climate movement want to compete in elections on separate climate platforms is a vote of no confidence for his party. "However, Fridays for Future activists also want to run for the Greens. So it is more differentiated," Habeck said. "As a party, however, we are beyond the phase where we just complain about everything that doesn't work. After all, we want to join the federal government precisely because we want to achieve more climate protection in reality and really make climate-neutral business possible."

A particular point of conflict is the Greens' original approval of a controversial autobahn construction project near the country's financial capital Frankfurt, where protesters built camps in a stretch of woodland known as Dannenröder Forest. The party approved the highway project a few years ago, but has recently called for a halt of all new highway construction in Germany in reaction to the protests. As a government coalition partner in the state of Hesse, the Greens share responsibility for the clearing of a protest camp by the police, during which one protester suffered grave injuries. The party mainly blames the activists for the recent escalation, reports newspaper taz.

"It would be terrible if we wanted the same thing but were unable to implement it because in the end we lacked the necessary majority," Göring-Eckardt said. "A central issue for climate protection in Germany and thus also in Europe is whether the Greens will be part of the federal government from 2021 or not." She added her party had to learn that radical calls alone are not enough, because they have to be implemented.

"Be careful not to radicalise yourselves to the point of disconnection.”

The Greens also face an important election in March next year, when voters in Baden-Wuerttemberg decide whether the Greens can hold on to their only government leadership at the state level. Baden-Württemberg's Green state premier, Winfried Kretschmann, had recently warned that a planned "climate list" that could unite voters seeking more radical climate action and lure them away from the Greens could have "grave consequences" for the party's success in the affluent state that is home to many companies from the car industry.

Party co-founder Fritz Kuhn, who is now mayor of Stuttgart, the capital of Baden-Wuerttemberg and the home of carmakers Daimler and Porsche, told Zeit magazine the new party programme "locates the Greens as a party that says we must achieve radical change if we want to preserve anything. There is real value conservatism in this, but also radical change." He added the programme draft had a strong focus on technology and the economy. Kuhn directed a warning to more radical climate activists: "Be careful not to radicalise yourselves to the point of disconnection."  Kuhn added he understood why young people are radical, but added "the good compromise is the high art in politics."