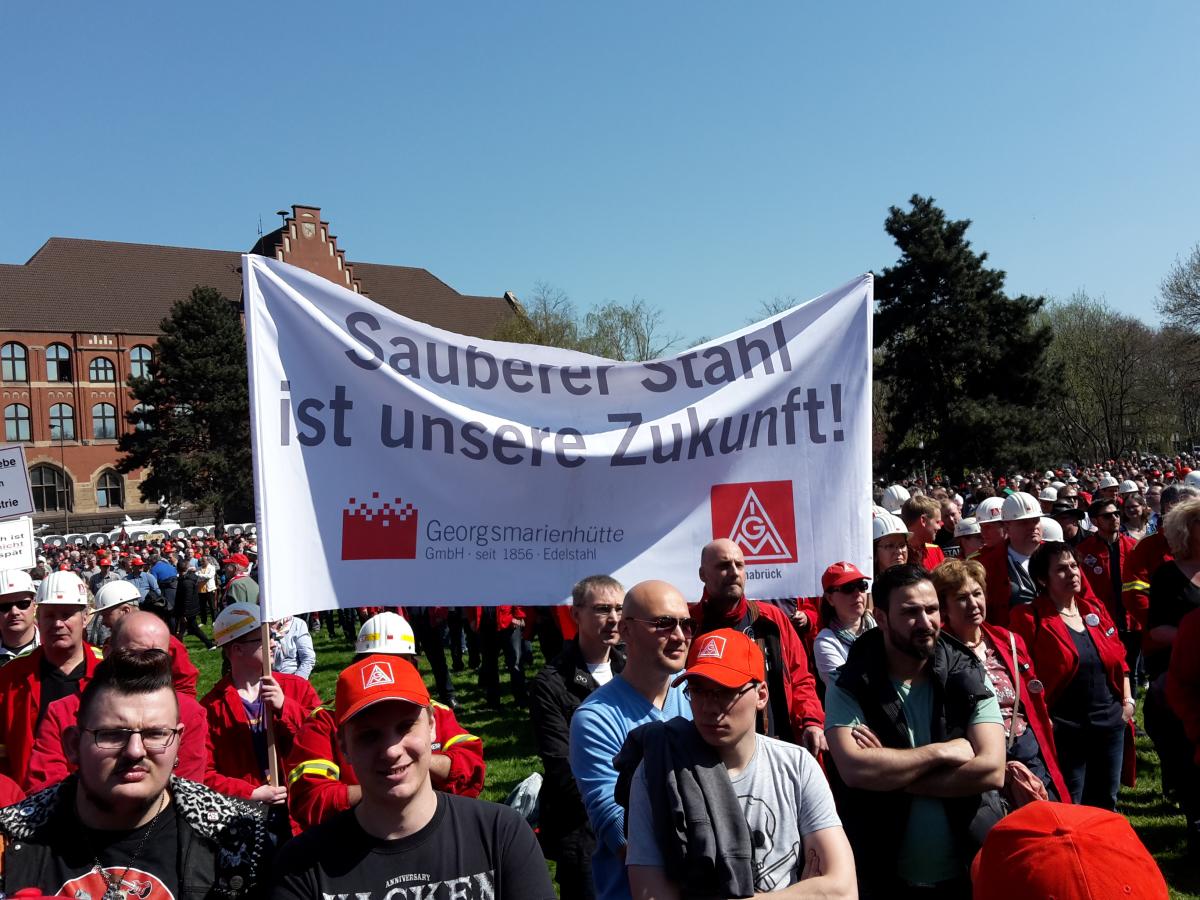 "Clean Steel is our Future!" - participants of the rally in Duisburg. Photo: CLEW.
With backing from economy minister Sigmar Gabriel, thousands of German steelworkers rallied against EU reform plans for the European Emissions Trading System (ETS) on Monday. Gabriel said there must be no contradiction between climate protection and a successful industry, and Germany must show that both go hand in hand. Critics said global overcapacities were causing trouble in the industry, rather than efforts to protect the climate.

In cities across Germany, more than 40,000 steelworkers protested against what they called Chinese dumping prices and the ETS reform they fear would put German industry at a disadvantage in the global market, according to press reports.

"Industry's success is the precondition for other countries to join in protecting our climate," Gabriel said  at the rally at ThyssenKrupp in Duisburg, Germany’s biggest steel production site. He called steel the "material of the Energiewende," pointing to its prominent role in construction and manufacturing.

Gabriel, a likely contender for chancellor in next year's parliamenary election, threw his weight behind a key industry demand that the top 10 percent of the most efficient steel production facilities should receive emission allowances free of charge after the planned ETS reform. He also promised no to support any EU plans that might give climate protection a higher priority than job security in the steel industry.

Mobilised by unions and employers’ associations, the protests come at a time when the EU and Germany struggle to meet climate goals and just after  Federal Environment Agency (UBA) reported that CO2 emissions from the German iron and steel industry increased in 2015.

The German steel industry opposes the European Commission's ETS reform plans, which would reduce the overall number of emission allowances at an annual rate of 2.2 percent from 2021 to 2030. An oversupply of certificates has led to a collapse in prices, making the ETS an ineffective tool in the fight against climate change. The industry argues current technologies offer little potential to decrease emissions without cutting back production.

"Today, we are fighting against policy targets that exceed technical possibilities by far,” said the President of the German Steel Federation (WV Stahl) Hans-Jürgen Kerkhoff at the rally. The federation warns the EU Commission’s reform proposals would mean additional annual costs of one billion euros in the coming decade, putting hundreds of thousands of jobs at risk. 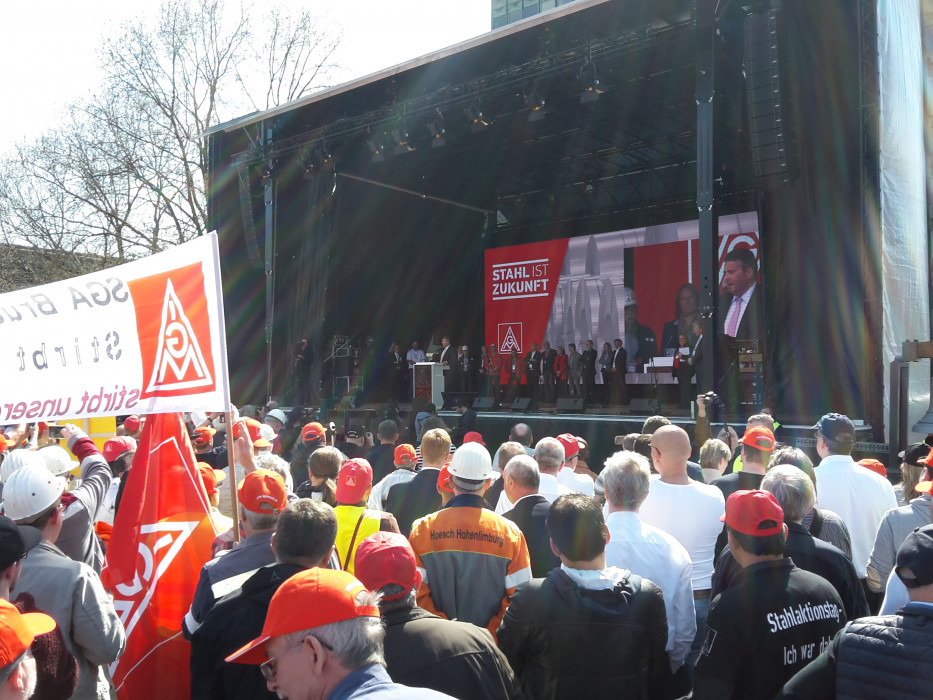 Workers at the rally called for a fair treatment of the German steel industry, demanding global regulations to reduce emissions should create a level playing field. Instead of paying for certificates, companies should be allowed to make better use of their capital: “Our employers have to invest more in research and development for cleaner technologies in steel production”, Detlef Jentsch, union representative and production worker at ThyssenKrupp, told the Clean Energy Wire. He agrees that the fight against climate change is important: “We have a responsibility towards our children – today is about their future.”

Environmental NGO Germanwatch said the embattled ETS had become the industry’s scapegoat. “The steel lobby uses highly unlikely horror scenarios – energy intensive industry also has to do its bit to protect the climate,” a press release read. Industry and unions waged a campaign against the ETS and discredited overdue reforms, while the industry’s real problem were massive overcapacities, Germanwatch said.

Eva Bulling-Schröter, energy and climate spokesperson of the Left Party’s parliamentary group, said steel workers’ job concerns were justified, but the overcapacities had nothing to do with European emissions trading. “This is why not less, but more climate protection has to be the motto for the steel industry after the Paris climate agreement.” She added steel companies had earned a lot of money with the ETS, by selling unused certificates they had received free of charge.

Find a CLEW factsheet on the ETS here.