People in Germany are less concerned about the impacts of climate change than the citizens of many other countries across the globe, according to a survey by Paris-based market research firm Ipsos. 59 percent of Germans expressed concern about today's impacts of climate change in their country, a share far below most other countries: South Africa is at number one with 83 percent, followed by Chile with 80 percent, and Italy with 79 percent. Overall, Germans were less preoccupied with climate worries when the poll was conducted around the start of the Ukraine war. Whereas 36 percent of Germans said they had been seriously worried about the issue in the last few weeks, there was considerably greater alarm in Latin American countries, with Colombia, Chile, Mexico and Argentina leading the way (Question: "To what extent, if at all, have you worried about climate change in the last 2-3 weeks?"). Among the 31 countries surveyed, worries among respondents in Germany ranked 24th -- below Saudi Arabia and the United States. Only 36 percent of Germans believe their coalition government of Social Democrats (SPD), Greens and Freed Democrats (FDP) has “a clear plan in place for how government, businesses and people themselves are going to work together to tackle climate change”. But one year ago, when the country was still ruled by a coalition between the Christian Democrats (CDU) and the SPD, the share was much lower still, at 28 percent.

Ipsos found that climate change is a regular concern for only half of the people around the world. “Despite seven in 10 people being concerned about the impact of climate change on our planet, for the majority of people globally there are other issues they feel are more pressing, such as their family’s health, war, financial concerns and the ongoing pandemic,” said Pippa Bailey, head of UK Climate Change & Sustainability Practice at Ipsos.

Germany was the country most concerned about climate change in a separate Ipsos survey in August 2021. 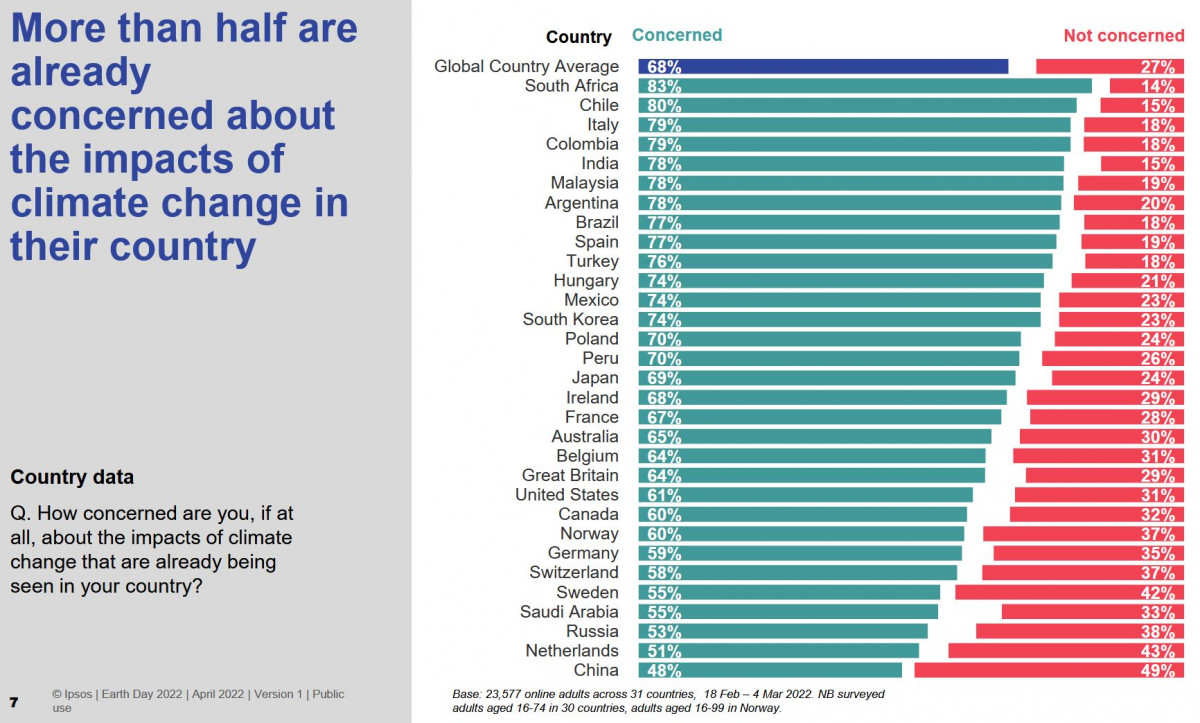