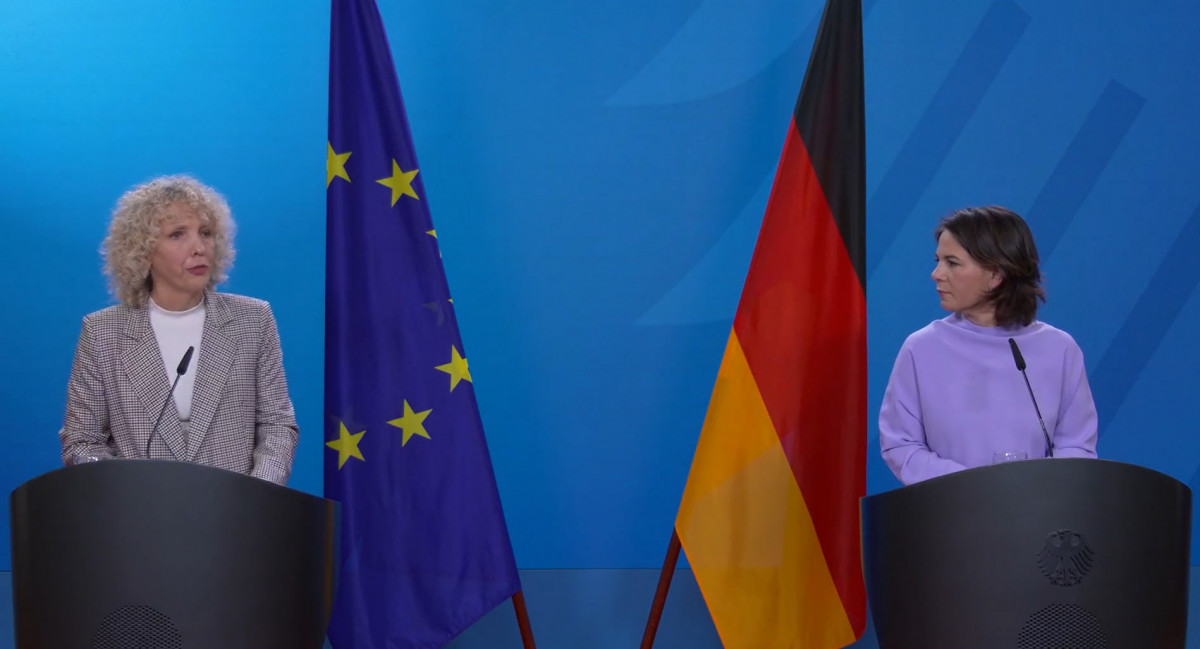 Germany aims to strengthen its climate foreign policy with the appointment of Greenpeace International head Jennifer Morgan as special envoy. The new “face of Germany’s international climate policy” will expand partnerships with other countries and lead dialogue with civil society worldwide, said foreign minister Annalena Baerbock. Morgan, who has been a Berlin resident for long stretches of her life, has decades of experience in climate policy and is a very well-connected player at the international stage. [UPDATE adds quotes details on German foreign climate policy plans & reactions to appointment]

The head of environmental NGO Greenpeace International, Jennifer Morgan, will become the German government’s new special envoy for international climate policy following a call by foreign minister Annalena Baerbock from the Green Party. With the appointment, the new administration takes another step in implementing its key aim to strengthen climate foreign policy.

Morgan, a U.S. citizen, was appointed by the government cabinet on Wednesday. She will have to acquire German citizenship before being allowed to become a fully-fledged state secretary in the ministry, said Baerbock.

Morgan, who will start her work as special envoy on 1 March, said she wants to bring her many years of experience in the climate movement and also in think tanks into politics. “My goal is a pro-active, cross-departmental 'Team Germany,' to achieve true climate neutrality and global climate justice together.” She said the world needed “unprecedented international cooperation to bring the world onto a 1.5-degree path” and introduce an ambitious agenda for the phase-out of fossil fuels.

The Social Democrats, Greens and the pro-business FDP agreed in their coalition treaty to make climate action a central task that cuts across the new government’s policy departments – including international aspects in the development ministry and the foreign office. The government aims to make its climate foreign policy “more coherent and stronger,” says the treaty.

“In foreign policy, we have put the management of the climate crisis where it belongs, at the very top,” said Baerbock. The world must cooperate to curb global warming, and Germany would align its foreign policy accordingly, Baerbock said. “In future, we will not only have one climate ambassador,” she added with a nod to Morgan, “but we will turn all 226 German missions abroad into climate embassies in all countries of the world.”

Morgan herself highlighted Germany's role in the world. "With the decision to phase out coal and nuclear power, as well as the emphatic promotion of renewable energies and hydrogen, Germany has set an example worldwide," she said. "The Energiewende [energy transition] is a clear soft power for Germany and we will actively use this."

At the centre of the international climate agenda are the UN climate change conferences. “That is why I will be representing Germany in Egypt for the first time as German Foreign Minister at this year's climate conference,” Baerbock said. COP27 is set to take place in Sharm El-Sheikh from 7 to 18 November. As an important stepping stone, Germany invites a selected set of governments to the Petersberg Climate Dialogue in Berlin every year. Baerbock said she will invite Egypt to co-chair the summit which will take place in July.

The German government also wants to use this year’s presidency of the Group of Seven (G7) leading industrialised nations and democracies to improve the coordination of global efforts to combat climate change. The country is set to push for the establishment of an international climate club of countries with ambitious policy. Cooperation with emerging and developing countries especially on infrastructure will also be a key goal, making the G7 leaders’ summit on 26-28 June in Schloss Elmau in the Bavarian Alps yet another important stepping stone on the way to COP27.

Jennifer Morgan – a person “with excellent connections”, but appointment is "risky bet"

Morgan, who studied political science and German philology, has been a Berlin resident for long stretches of her life and already worked as an advisor to the German government in different roles, before becoming head of Greenpeace International in 2016.

Minister Baerbock commended Morgan’s “global reputation and appeal”. Morgan has been a regular attendant at UN climate change conferences since these began in 1995. German newspaper Frankfurter Allgemeine Zeitung called her “a woman with excellent connections” to major players like U.S. climate envoy John Kerry, and a possible “link between the young climate activists, who primarily express their radical rejection of the tough process, and those politicians who spend nights struggling to find compromises.”

Morgan’s appointment was largely welcomed by stakeholders in Germany. Jennifer Tollmann of climate policy think tank E3G, where Morgan used to work until 2009, told news agency Reuters the German government would now take a woman on board “who was at the heart of the negotiations for the Paris Agreement.” Tollmann said the Greenpeace leader could advance chancellor Olaf Scholz’s idea of an international “climate club” that aims to form a group of countries with ambitious climate policies.

Greenpeace Germany head Martin Kaiser said the appointment of Morgan shows that foreign minister Baerbock is serious about the realignment of climate foreign policy. “Morgan is a guarantee that the concerns of civil society are taken into account in international climate policy.”

However, there were also more cautious voices. While Morgan is well qualified in terms of her knowledge and contacts, her appointment is a "risky bet", wrote journalist Jakob Schlandt in a commentary for newspaper Tagesspiegel. “Morgan does not come from a peaceful, technocratic environmental NGO, but a strident campaign organisation that, while mindful of peacefulness and little harm, deliberately commits crimes.” In addition, Morgan had so far been a sceptical voice regarding the outcome of climate conference. “After the recent climate summit in Glasgow, which others assessed much more positively, she spoke in Greenpeace routine of a "weak" result. How credible is it if she now also sells rather disappointing compromises as successes, which is absolutely necessary as a negotiator?,” asked Schlandt.