Germany remains the highest EU renewables employer with about 355,000 jobs, despite a 4 percent decline in employment in the sector in 2014, according to a report by the International Renewable Energy Agency (IRENA). Germany has almost as many people employed in the sector as France, the UK and Italy combined and is the seventh largest renewables employer in the world, the report says. Employment in onshore wind rose by 10 percent in 2014 but fell in the PV industry by 32 percent over the same period. Estimates for 2015 were not yet available.

Find the press release by IRENA in English here. 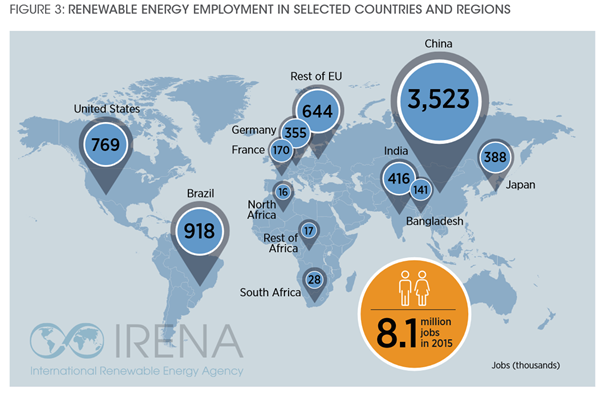 “A few cents per litre of petrol”

A study by the Cologne Institute for Economic Research (IW) and Delft Technical University on behalf of the Federation of German Industries (BDI) argues that Germany could achieve its ambitious climate targets without endangering economic competitiveness by extending emissions trading to transport and heating oil, reports Daniel Wetzel in Die Welt. Car users would have to pay a few cents more per litre at the petrol pump, while energy taxes and the renewables surcharge on power could be cut step by step, according to the study.
The paper suggests an end to the BDI's internal dispute over principles, Wetzel writes. The car industry had been in favour of extending the EU emissions trading system (ETS) to mineral oil, in the hope this could prevent stricter emissions limits on individual cars. But the chemical industry and others had vetoed this idea, arguing it might push up the price of CO2 certificates in general.
The BDI-financed study says the ETS should only be extended to transport if businesses facing international competition are granted relief on national costs, according to Wetzel.

The BDI will present the study at a press conference in Berlin on Friday.

For background, read the CLEW dossier German industry and its competitive edge in times of the Energiewende.

Germany’s wind industry held protests yesterday against government proposals for a reform of the Renewable Energy Act (EEG) that they fear will slow down the development of wind power, writes Bernd Radowitz for Recharge. Some 30,000 employees and executives at 200 locations across Germany “were protesting mainly against a switch to tenders in the support of renewables that they fear will harm the very grass-roots groups that have been the backbone of Germany's Energiewende,” writes Radowitz. One of the organisers, Industrial Union of Metalworkers (IG Metall), criticised current government plans in a press release about the protests: “The government is endangering an industrial success story. […] The Energiewende is a job motor.”

Find the Recharge article (behind paywall) in English here.

Find the press release by IG Metall in German here.

For background, see the CLEW factsheet EEG reform 2016 – switching to auctions for renewables.

The government wants to slow down onshore wind development with its reform of the Renewable Energy Act (EEG), writes Craig Morris on energytransition.de. He argues this will not make the Energiewende cheaper, the government’s declared aim, because offshore wind is much more expensive. But some regional states oppose the reform plans. At a meeting on 31 May, they will attempt to “forestall the worst,” writes Morris.

For background, see the CLEW factsheet EEG reform 2016 – switching to auctions for renewables.

“Germany and the U.S. Have Different Ideas About Energy”

Germany might be producing ever more electricity from renewables, but the share of its electricity generated by burning coal has hardly declined over the past decade, meaning emissions are almost unchanged, writes Justin Fox for Bloomberg. Meanwhile, the US is seeing more and more natural gas production. “The fracking boom has allowed natural gas to supplant dirtier, more carbon-intensive coal as the No. 1 source of electrical power,” writes Fox. The argues that “If your top priority is slowing climate change, then, the shifts in US power generation over the past few years have arguably been more encouraging than those in Germany.” At the same time, “Germany's experience […] demonstrates that it is possible (albeit not without costs) to move to renewables much faster than the US has.”

“May be lights out at Solarworld”

A US lawsuit threatens the survival of Germany's largest maker of solar panels, reports Franz Hubik in Handelsblatt. Court papers seen by the business daily indicate that the country's last big module manufacturer may have to pay 770 million dollars to a US supplier, according to the article. “If the court rules in favour (of the supplier), Solarworld will be in deep financial trouble because it doesn’t have the cashflow nor has made provisions to pay the award,” writes Hubik. Solarworld has already acknowledged that if it has to pay the judgment, its existence could be “threatened,” according to the article.
When asked to comment on the article by the Clean Energy Wire, Solarworld referred to a Reuters interview with CEO Frank Asbeck. He told the newswire his company could fight a decision in the US if it lost the case. He also said it was doubtful a US ruling could be enforced in Germany.

Read the article in English (behind paywall) here.