Germany urged to end coal financing / 'Save the Energiewende' protests 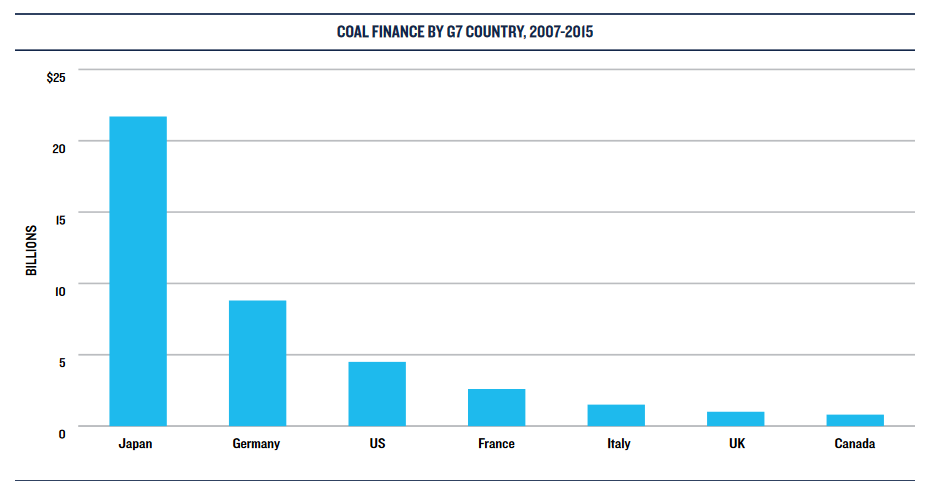 Associations for renewable energies have joined forces with the Industrial Union of Metalworkers (IG Metall) to organise a “moment of warning” as part of the campaign “Save the Energiewende”, reports pv magazine. Protesters wanted to gather today in numerous locations across Germany to demonstrate against current government plans to slow down renewables development. The organisers say that the development has advanced too much “to be stopped without collateral damage” and call for a “solid regulatory framework for a renewable energy system”, writes pv magazine.

Find an overview of all campaign happenings in German here.

Germany’s renewables growth in 2015 was the largest in both percentage and absolute terms in the last decade, reports the U.S. Energy Information Administration EIA. In its short overview of the Energiewende, the EIA points to rising electricity costs for consumers. It also says the rapid renewables growth has created problems for the German grid and neighbouring countries.

For background, read the CLEW factsheets What German households pay for power, Re-dispatch costs in the German power grid. 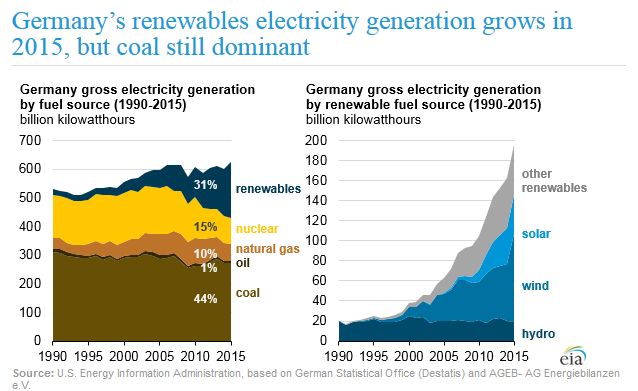 “Germany runs up against the limits of renewables”

Renewable generation is rising rapidly in Germany but carbon emissions also increased slightly in 2015, writes Richard Martin in the MIT Technology Review. This is because coal plants need to keep running to balance variable wind and solar, according to Martin. “Germany is giving the rest of the world a lesson in just how much can go wrong when you try to reduce carbon emissions solely by installing lots of wind and solar.” He says a steep price on carbon and a European “supergrid” would help to lower emissions.

For background, read the CLEW article German CO2 emissions rise in 2015 despite renewables surge, as well as the factsheets Germany’s energy consumption and power mix in charts and Germany’s greenhouse gas emissions and climate targets.

“A tax for power self-suppliers? That is absurd!”

The finance ministry’s proposal for a power tax on renewable power generated for self-supply is absurd, argues Jan Willmroth in a commentary in Süddeutsche Zeitung. “The equivalent would be to demand vegetable taxes from hobby gardeners if they grow and eat their own cucumbers, carrots and salads, instead of getting in the car and buying them in the supermarket.”

Economics minister Sigmar Gabriel “fears a cost debate” regarding Germany’s energy transition amid a likely increase in both the Renewable Energy Act (EEG)-surcharge, as well as grid costs in the coming election year, writes Andreas Mihm in an opinion piece in Frankfurter Allgemeine Zeitung. Mihm writes that it is logical to slow down wind power development where the grid is insufficient. “While it makes sense to slow down the development, it is insufficient to do so only with onshore wind power. Offshore wind farms and solar parks need power lines, too – which are missing,” writes Mihm.

Swedish opposition lawmakers called on state-owned utility Vattenfall to shut down polluting coal assets in Germany’s Lusatia region instead of selling them to Czech firm EPH, writes Megan Darby on Climate Home. The Swedish government “will decide imminently whether to give the go-ahead” for the deal. Concerns about coal mines’ future were echoed by scientists: “If European countries fail to close very old coal-fired power stations quickly, how can they expect emerging economies with much newer coal-fired power stations to follow suit?”, asked Ben Caldecott, director of the sustainable finance programme at the University of Oxford’s Smith School. The Swedish parliamentary debate was interrupted by protesters shouting “leave coal in the ground” and squirting what looked like ketchup on politicians, writes Darby.

With its 10-year anniversary, the German-French Office for Renewable Energy’s portfolio is expanded with topics like energy efficiency, mobility and grids. According to a press release by the Federal Ministry for Economic Affairs and Energy (BMWi), the name of the bilateral institution will change to German-French Office for the Energiewende. Its objective is to exchange know-how on the development of renewable energies and their integration into the energy system between French and German actors.