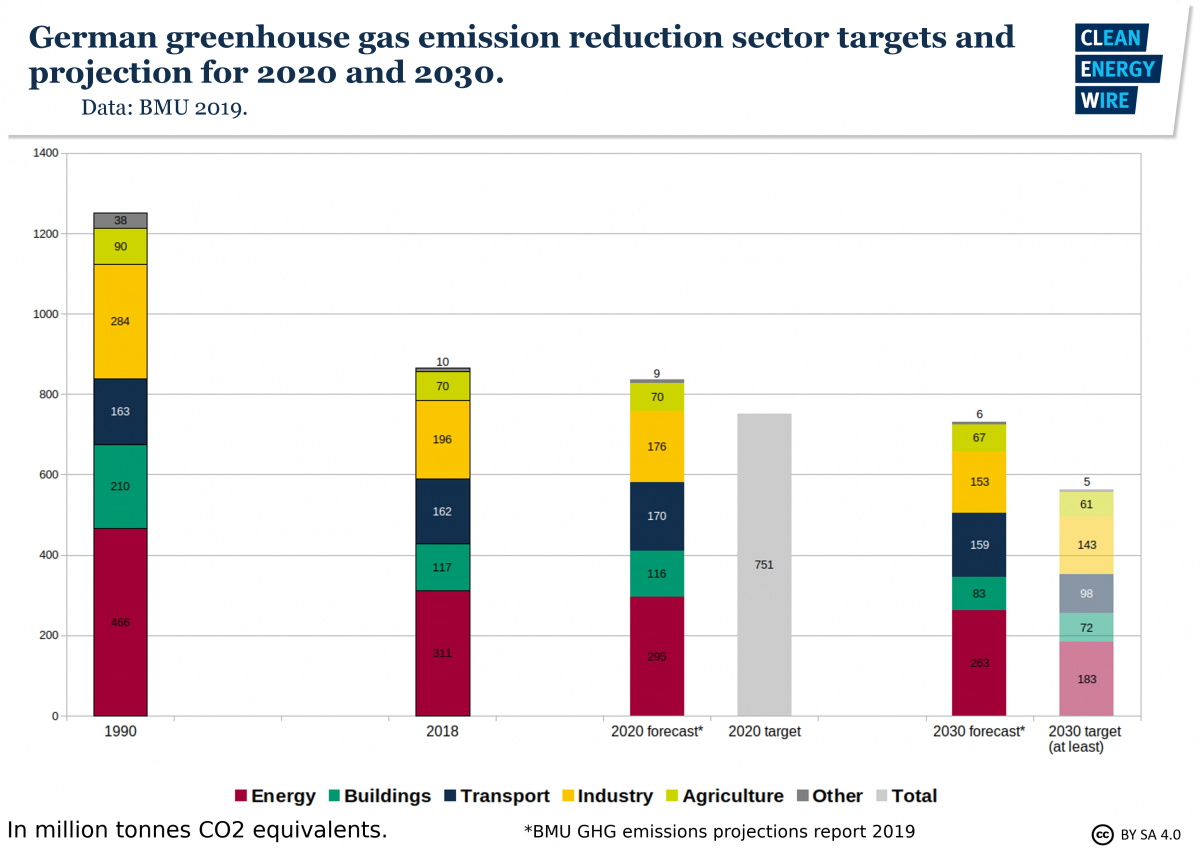 Germany is set to widely miss its greenhouse gas reduction targets for 2020 and 2030 unless significant steps such as the proposed coal exit are taken. The environment ministry’s new emissions forecast shows that the country must introduce additional climate action measures in all economic sectors to reach its goals. The calculations do not yet take into account the coal commission recommendations to exit the fossil fuel by 2038 at the latest, or plans by Chancellor Angela Merkel’s government to ramp up renewables expansion. Germany also comes near bottom in an EU-wide analysis that showed that none of the 28 countries was on track to meet the 2030 target. [Adds analysis of EU state's climate plans.]

Germany will miss its greenhouse gas reduction targets for 2030 in all economic sectors, if no additional climate action measures are taken, according to a report on Germany’s emissions projections for the years until 2035, commissioned by the federal government.

The projections take into account all climate measures decided by summer 2018. Therefore, it does not include a commission proposal to gradually phase out coal by 2038 at the very latest. The grand coalition’s goal to expand renewables to cover 65 percent of electricity consumption in 2030, and additional renewables auctions are also not included, as a relevant law had not yet been passed at that time.

Germany also came second to last in a report commissioned by the European Climate Foundation* (ECF) and carried out by the Ecologic Institute that showed the current emissions reduction and energy transition plans by all of the 28 EU member states do not indicate that any of them will reach their 2030 climate target - but there is still enough time to adjust these plans.

After it became clear that Germany will miss its national 2020 goal, it is now under pressure to meet its European target of cutting greenhouse gas emissions by 55 percent by 2030. To bridge the gap between climate targets and current emission trends, German Chancellor Angela Merkel has introduced a "climate cabinet" to ensure more progress on emissions reduction.

The group of ministers with key responsibilities related to climate issues are supposed to come up with a package of legislation to ensure Germany reaches 2030 climate targets, to be introduced by the end of the year. Possible climate action measures that the cabinet is set to discuss now also include CO₂ pricing, after the government has shied away from the discussion about what tabloids have already dubbed “yet another tax blow” for fear of angering voters.

Germany must present an in depth report on its future emissions to the European Union every two years. The report is based on model calculations developed by a consortium of German research institutes, including the Institute for Applied Ecology (Öko-Institut) and Fraunhofer ISI. It includes all measures that the German government decided by August 2018.

More than half of projected emissions reduction will come from the energy industry, first and foremost due to a decrease in coal-fired power production, according to the report. The lion’s share of reductions in the other sectors will come from households. Here, renovation measures and a decrease of oil-based heating systems will be key.