The German government has adopted an amendment to its offshore wind power law that sets new expansion targets of 20 gigawatts (GW) capacity by 2030 and 40 GW by 2040. Economy minister Peter Altmaier said the revised law sets a new "milestone" for offshore wind energy that allows the country to come closer to its target of reaching a renewables share in power consumption of 65 percent within the next decade. "For the first time, we've also set a target for 2040, which provides all involved actors with long-term planning security," the minister added. The offshore wind power law is supposed to streamline and speed up administrative procedures in order to enable a swift implementation of licensed offshore wind projects and also sets the legal basis for green hydrogen production at sea, the ministry said.

Municipal utility association VKU welcomed the amendment in principle but criticised that it failed to prevent "speculative bidding" in project tenders. Only large companies would be able to submit zero-support bids without putting their financial survival at stake, VKU head Ingbert Liebing argued. "This would further reduce the number of actors in the offshore wind sector," Liebing said, adding that the amendment would likely pose a hurdle to municipal utilities seeking to engage in offshore wind projects, rather than making these more accessible. He added bids in project tenders should be based on actual electricity production costs, rather than on power price forecasts, which could for example be done with so-called contracts for difference that are tied to a fixed price level in advance.

Environmental organisation NABU criticised the "hasty" decision to raise the expansion target, saying it ignores the need to reconcile renewable power production with animal protection. While NABU supports the 2030 target of 20 GW, doubling the capacity over the following decade would merely satisfy industry demands and disregard the impact on already strained ecosystems in the North Sea and the Baltic Sea. According to NABU, completing the 40 GW target would mean that about 6,300 square kilometres, 22 percent of Germany's exclusive economic zone in the North Sea, are occupied by wind farms. This could potentially have severe implications for local bird species, which shun wind turbines by several kilometres and thus stand to lose half of the German North Sea as their habitat, NABU said. 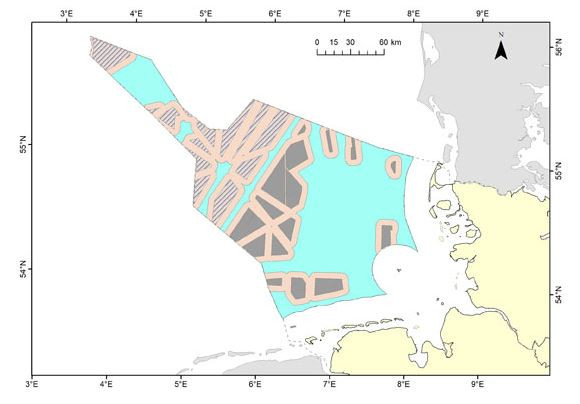