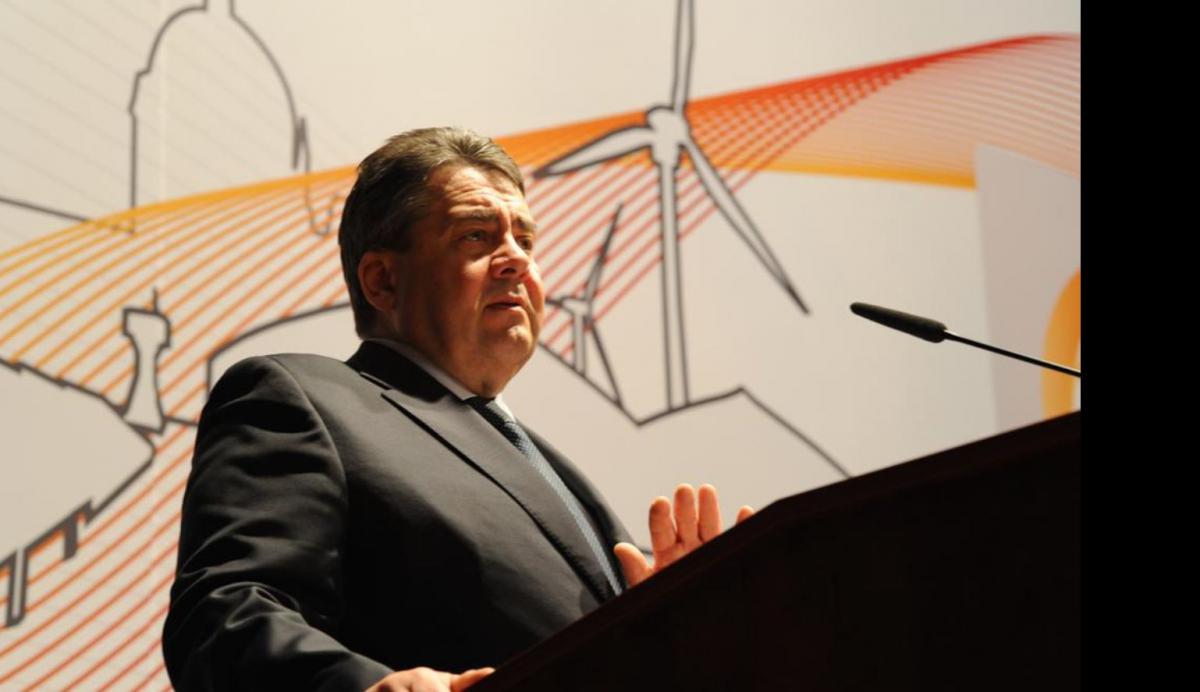 "The most stupid thing you can do with oil and gas is burn it,” Sigmar Gabriel, German Minister for Economic Affairs and Energy, at the Berlin Energy Transition Dialogue. Photo: BSW-solar.
UPDATE -- Over 900 ministers, officials, business people, energy experts and journalists from around 60 countries take part in the first Berlin Energy Transition Dialogue, a two-day confernce hosted by the German Foreign Ministry, the Ministry for Economic Affairs and Energy and the Renewable Energy Federation. The following is a collection of comments by the participants.

"The Energiewende is the cornerstone of our climate policy."

"We want to encourage other countries to follow our example."

"We have to start a global energy transition as quickly as possible."

"The global climate can be stabilised through a decarbonisation of our energy systems."

"This is not an easy transformation. We have learned some lessons, that has cost us money, too. You don't have to spend this money again."

Gaspersic said his country was struggeling to reconcile conflicting EU targets. "There is a collision between two distinct EU policies - biodiversity protection and more renewables."

Ali Saleh Al-Omair, Minister of Oil and Minister of State of the National Assembly, Kuwait

"The Energy sector in Kuwait is late adopter of renewables." Al-Omair said that the country’s interest in solar was "huge".

"We are unfortunately late although we are one of the first countries in the region to think about solar. We have obstacles which is the dust and how to store the energy generated from the solar panels."

(On the lessons learned from Desertec) "We have to reduce the costs of production, manufacutering the equipment, connection grid to Europe. We have a link for gas, and we would like to have the same for electricity. But today, the European power market is not open. Desertec was an idea but there was no concrete project for it. We have the resource and you have the market and we can share the technologies but the challenge is to reduce the costs and open the markets, we have to to it in partnership."

"Energy security, security of supply is the most important thing for us."

"The renewables support scheme caused very fast development of the renewables sector, and caused some problems. We should take some measures in order to achieve a balance, we had too many incentives and then we cut them."

"Energy independence is the most important goal for Romania."
Financing a hurdle?

(On strikes in the mining sector) "Fortunately we solved them. I would say that the sector understands the need for reforms, but we still need some investment here, because otherwise we cannot keep them alive."

Nils Vikmång, State Secretary to Minister for Energy, Ministry of the Environment, Sweden

"Sweden introduced a CO2 tax in 1991. We have cut our emissions dramatically while GDP has continued to grow. Further developing renewable technologies will give more jobs, growth and innovation."

"We introduced in 2003 a green certificate system. It has suceeded in leveraging a large share of renewables at low costs for consumers."

"No country can do this alone. Sweden has to follow European developments very closely. We depend on European investment climate for renewables. We need a European system that helps integrate renewables."

"Sweden is the only country that has reached, in fact exceeded the EU target for transport. Shifting away from fossil fuels in the transport sector remains our biggest challenge."

"We have a lot of hydropower and chances for offshore wind, but the most important thing is to have the broader agreement between all the parties in the parliament so that investors have stable and longterm rules."

"No country can stimulate such a transition on its own, that is why we are all here.

Jeremy Rifkin, President of the Foundation of Economic Trends

"We are getting a glimpse of the long sunset of one of the great energy eras in history."

“2008 (when Brent hit 147 dollars a barrel) was the beginning of the long sunset of the second industrial revolution based on fossil fuels.”

“We are seeing the possibility in Germany that millions of people create green energy and share it on the energy internet.”

"This (the energy transition at the centre of the third industrial revolution) is the only plan I know that will allow us to address climate change if we still have any time left. There is no plan B."

Read a paper by Jeremy Rifkin prepared for the conference here.

"It (the Energiewende) is the German 'Man-to-the-Moon' project."

"Energy transition also means international networking to learn from each other."

"All countries have to get active to lower global CO2 emissions."

"Germany has made the climate one of the key issues of our G7-presidency."

"Only if Europe can prove that economic success can be enhanced through the energy transition, will others follow."

"The most stupid thing you can do with oil and gas is burn it. "

"The political problem is that the ecological and economic costs of the nuclear and fossil industries materialise far in the future and often in other countries. The costs of investment into renewable energy materialise today. Nothing is more difficult than putting a price on the future."

"The global energy transition has already begun and partly due to the progress in Germany."

"We have reached a watershed moment because renewables are now more competitive than fossil-generated power, even in oil-producing countries."

"We are the first generation seeing the effects of climate change, and probably the last to be able to do something about it." 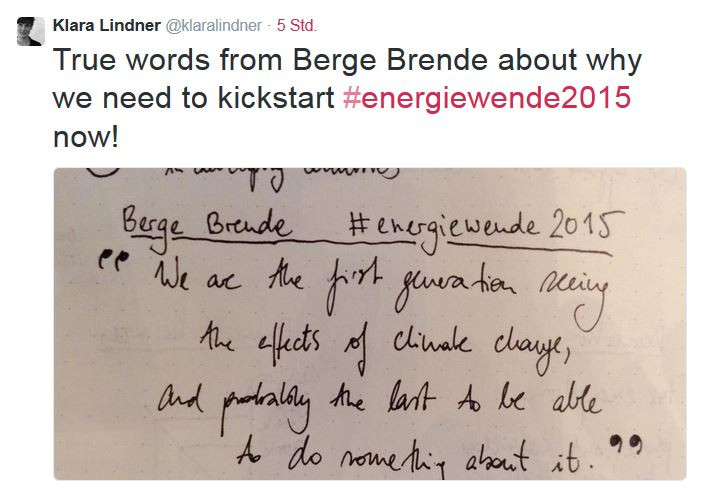 "Being a neighbour of Germany is both an advantage and a challenge." Cooperation, innovation has helped to make the country less dependent from Russian gas and the transition of gas through Ukraine.

Yet Germany's Energiewende poses challenges because the electricity markets are interconnected. "We must live somehow with Energiewende."

The country supported the European Union goal to cut emissions by 40 percent by 2030, Mladek said. "We are a bit uneasy about the goal on renewables. We have very little sunshine and very little wind."

Energy security understanding has changed. "Renewable energy and energy efficiency are intrinsic part of it."

Emerging countries have also discovered renewable energy as a support for economic growth.

Van der Hoeven said there will be fossil fuel use in the future, too. So the question was "How are we going to use, produce our fossil fuels. There will be a need to clean them up."

"Energy related infrastructure is the biggest source of co2 emission. If you really want to do something about climate you have to clean up our energy sector."

“The energy transition will not take place on its own. It will require leadership, prudence and vision.

Read the text of her introductory remarks here.