How to achieve a transport Energiewende / A 'Monopile Monopoly'

“No climate protection without an energy transition in transport”

Transport is absolutely crucial to decarbonising the economy and Germany should embrace a leading role, but the transport ministry is barely tending to the issue, write mobility experts Weert Canzler from the Leibniz Research Association Energiewende and Felix Creutzig from the Mercator Research Institute on Global Commons and Cimate Change (MCC), in an op-ed in the Frankfurter Rundschau. They argue three crucial steps are needed to start the energy transition in the transport sector: Firstly, a steady increase of the petrol tax to set clear pricing signals; secondly, ambitious future emissions standards that force the use of electric vehicles; and thirdly, investments to push climate-friendly modes of transport such as carsharing, trains, and cycling. “Without the courage to take the necessary political decisions now, it won’t happen,” write Canzler and Creutzig.

The future of the steel industry in Europe and Germany will depend on the framework conditions in energy and climate policy, Thyssenkrupp CEO Heinrich Hiesinger told Die Welt in an interview. If the EU was sticking to its plans for reforming the emissions trading scheme, steel from Europe would cease to be competitive, he told the paper. The reform of the German Renewable Energy Act could bring further burdens for the industry. Pushing the steel industry out of Europe wouldn’t be good for the climate though, as it would simply be moved to producers abroad with a “dramatically worse” climate record. Per tonne of steel produced in China, CO2 emissions were 500 kg higher than in Europe, Hiesinger said.

“After a rough start, the expansion of offshore wind energy in Europe is finally getting underway,” writes Franz Hubik in the Handelsblatt. 13 offshore wind farms were connected to the grid in 2015 off the German coast. Steel pipe construction company EEW in Rostock is one of the beneficiaries, earning about 270 million euros in annual revenues with offshore foundations – it benefits from having specialised in monopile foundations, writes Hubik. Apart from EEW there are only two other vendors of these parts in Europe and offshore wind farm operators are complaining they are unable to keep up with demand, says Hubik.

Read the article in English here (behind paywall).

Energy minister Sigmar Gabriel’s deal with lignite power station operators to shut down some of their oldest power stations against payment is not decisive for reaching Germany’s climate target, writes Jürgen Hacker, chairman of the German federation for emissions trading and climate protection (BVEK), in a guest article for the Handelsblatt. Reducing emissions from German coal-fired power stations doesn’t have any effect on the climate, because the saved emissions fall under the European Emissions Trading Scheme (EU ETS) and if CO2 allowances are not used by the German power producers, they will be used elsewhere in Europe, Hacker says. If Germany wants to achieve its 40 percent CO2 reduction target by 2020, the EU system has to be extended to include the transport sector, he writes. This would be cheaper for the consumer and more effective in protecting the climate.

The share of renewables in Germany’s power supply rose 3.1 percentage points per year on average from 2010 to 2015, writes Craig Morris on energytransition.de. “With only 66 percent of conventional electricity remaining, the country would only need another two decades to reach 100 percent renewable power – theoretically.” But in practice, that would mean scrapping the entire conventional fleet, as well as solving the issues of power storage and grids, according to Morris.
This is why Germany adopted its first-ever limit on renewables growth, aiming for a maximum share of 45 percent by 2025. This illustrates the necessity for the transition from feed-in tariffs to auctions, a development that risks shutting out the further development of citizens’ energy, according to Morris. “So while lots of people celebrate 33 percent renewable electricity in Germany, we have our work cut out for us in 2016. The government is about to hand over nearly all of the remaining growth to the large utilities that invest in offshore wind.” 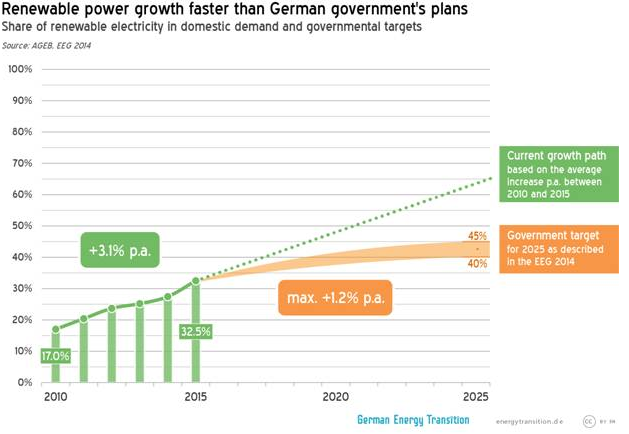 German manufacturing companies competing in world markets have increased their energy efficiency sufficiently to continue to receive tax relief worth two billion euros, according to the finance ministry. The full relief was tied to reducing energy intensity by 2.6 percent in 2014 compared to the period from 2007 to 2012. According to an analysis by independent research institute RWI, the companies achieved a reduction of 8.9 percent.