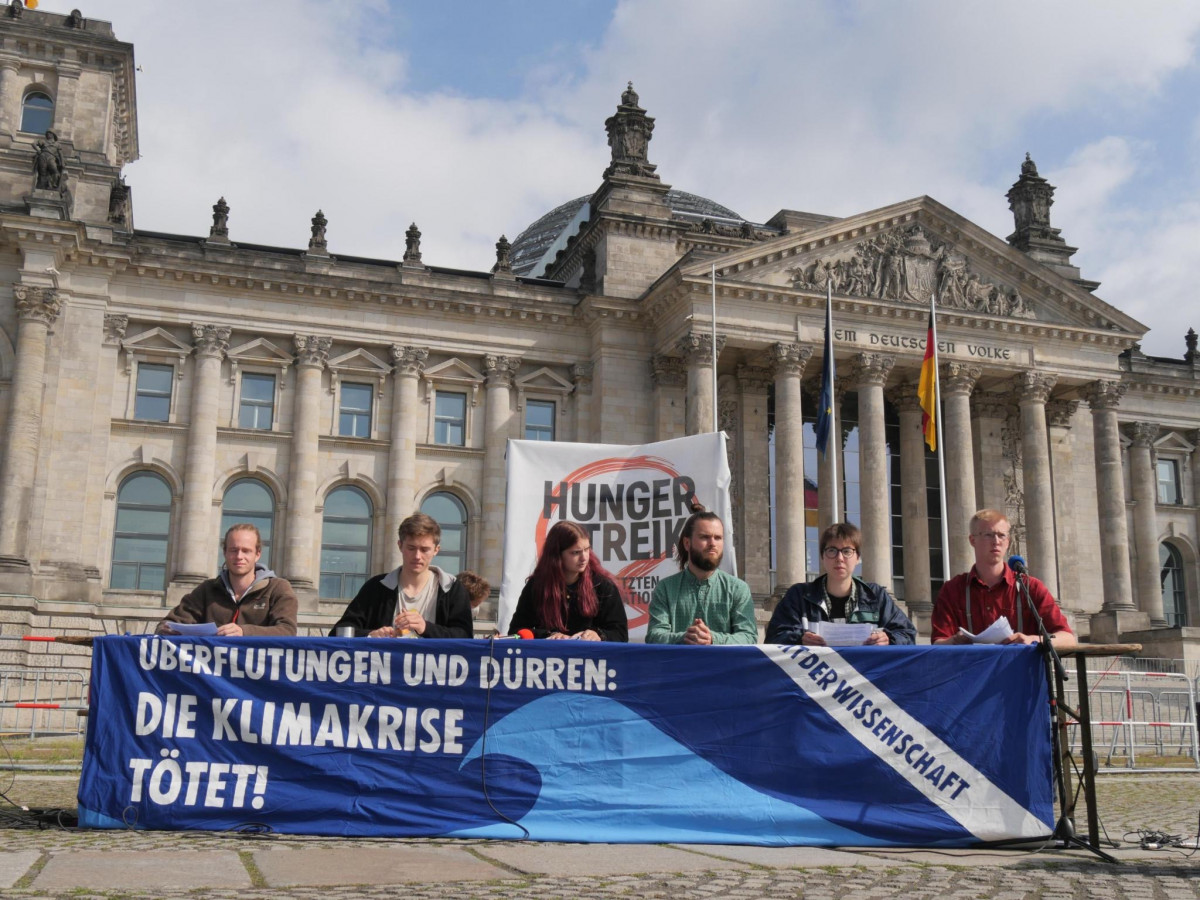 In the run up to the German federal election, a group of young people have entered a third week of a hunger strike to call for more climate action - with one of the protesters being temporarily admitted to hospital. The group, which calls itself the ‘last generation’, vows to continue their strike until they can publicly meet with the three leading chancellor candidates. In a joint reply, Annalena Baerbock (Green Party), Armin Laschet (CDU) and Olaf Scholz (SPD) agreed to a private in-person meeting with the activists, but only after the election and on the condition that the hunger strike be ended. A recent survey shows young people worldwide experience anxiety in response to the climate crisis and government inaction on the issue. [UPDATE: Protesters refuse offer by chancellor candidates; Government appeals to strikers not to risk their health]

A group of six young people – aged 18 to 27 – started an indefinite hunger strike on 30 August to call for more climate action in the run up to the German federal election on 26 September. Under the name ‘the last generation’, the protesters have set up a camp in the centre of Berlin, a stone’s throw away from the federal parliamentary buildings. One of the protesters, the 27-year-old Jacob Heinze, was temporarily admitted to hospital on Tuesday after 16 days of not eating. The group vows to continue the strike until the three leading chancellor candidates vying to replace Angela Merkel - Olaf Scholz (SPD), Annalena Baerbock (Green Party) and Armin Laschet (CDU) - agree to meet with them in public. “We are in a life-threatening climate emergency that is being fueled daily,” the group writes in a press statement, adding that the major parties’ climate plans are “out of touch with reality and unconstitutional”.

On Tuesday, 14 September, the Green party published a joint statement by Baerbock, Laschet and Scholz, saying the three are ready for talks with the hunger strikers - individually, in person, not publicly, and after the Bundestag elections - press agency dpa reported. The prerequisite for this is an end to the protest action in this form. "Despite different political positions, Ms. Baerbock, Mr. Laschet and Mr. Scholz agree that they do not find this kind of protest appropriate," the Greens write. "They are putting themselves in danger with it and possibly motivating other young people to follow suit." In addition to a meeting with the chancellor candidates, the group demands that a new government install a citizens’ council in which immediate measures against the climate crisis are to be discussed, including "a 100 percent regenerative agriculture", they write.

During a press conference held in the camp on 15 September, the protesters said they refuse the candidates' offer, saying it is the opposite of what they want: they call for a conversation in public and before the elections. "Climate should be the main topic of the elections," said press speaker Hannah Lübbert, and not "be kept out of it." The group has now decided to set an appointment date to meet with the chancellor candidates on Tuesday 23 September. "They know about the appointment and we are waiting for them to confirm or deny," Lübbert explained. Heinze, who has been discharged from the hospital, pledged to continue the indefinite hunger strike until the group has an "honest conversation" with the politicians.

The German government has appealed to those involved in the strike in Berlin not to endanger their health. "In the political debate on climate protection, which is the most important one we have, every suggestion is welcome, but please, without putting yourself at risk," government spokesman Steffen Seibert told Tagesschau. SPD chancellor candidate Scholz commented on the hunger strike on 10 September, saying it is "not such a good idea" and appealing the activists to not put their lives at risk, Deutschlandfunk reported.

Eco-anxiety due to government inaction

Young people in countries across the world experience feelings of anxiety in response to the climate crisis and government inaction on the issue, according to a recent survey that is to be published in the journal Lancet Planetary Health, VICE World News reports. Of the 10,000 young people surveyed across 10 countries, 45 percent said climate-related anxiety and distress affect their daily lives and ability to function normally. Three quarters of respondents, aged 16 to 25, felt that “the future is frightening”. Another 60 percent said their national governments are “betraying” them and future generations through their inaction.

"Eco-anxiety is a sign of mental health, an entirely appropriate response to what's going on," Caroline Hickman, a researcher from the University of Bath Climate Psychology Alliance and co-lead author of the study, told the Thomson Reuters Foundation. "What does it mean for young people to see the world fall apart while we have solutions at hand, while we know how to stop it? Government is pushing us in front of a bus," German Fridays for Future activist Luisa Neubauer said. "I think people increasingly acknowledge how threatening it really is, especially as a young person, to look at your life ahead and know you will spend every single year of your life in the (climate) crisis," the 25-year-old added.

Another recent survey by the Pew research centre shows that 80 percent of citizens in advanced economies spanning North America, Europe and the Asia-Pacific region are willing to change how they live and work in an effort to combat the effects of climate change. A majority of 72 percent expresses concern that global warming will harm them personally in their lifetime, while less than half (46%) of respondents have confidence that international efforts will significantly reduce the effects of global climate change. Compared to data from 2015, the survey shows a growing sense of personal threat from climate change. In Germany, the share of people who are “very concerned” about the personal consequences of climate change has increased from 18 to 37 percent since 2015.