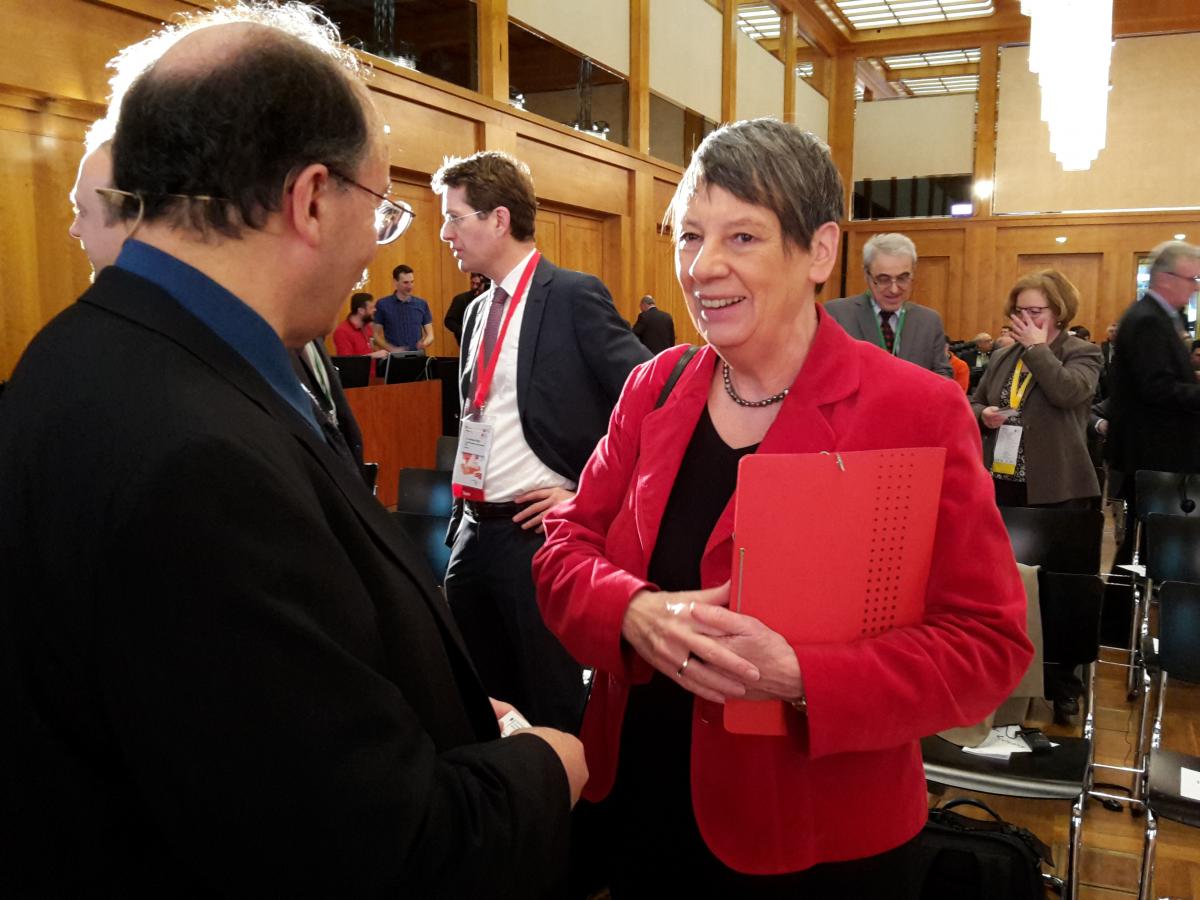 Germany's environment minister Barbara Hendricks with Rocky Mountain Institute founder Amory Lovins at the Berlin Energy Transition Dialogue. Photo: CLEW.
Renewable energy sources already play a key role in keeping Germany's carbon emissions in check, the country's environment minster told an international conference on Friday in Berlin. However, completing the energy transition was still a mammoth task, minister Barbara Hendricks said. Like a number of other speakers she stressed the need for action in sectors such as transport or heating. Bloomberg New Energy Finance founder Michael Liebreich warned that German carmakers could miss the boat as electrification of transport looked set to pick up pace.

Germany’s energy transition to a system based on renewables is the centrepiece of Germany’s climate policy, said environment minister Barabara Hendricks at the Berlin Energy Transition Dialogue on Friday. The transition is a mammoth task for the economy, industry and society but it would eventually benefit everybody, especially future generations, she said. If it wasn’t for the renewables business, now the main component of Germany’s power mix, the country would have lost out on many secure jobs. “As a next step we will have to find a combined approach to the electricity, heating and transport sector,” Hendricks said. “We believe that linking up different sectors will give us the ideal conditions to utilise wind and solar power.”

Lovins pointed out that the shift to renewables and other new technologies had left the utilities old business models in tatters. Their managers focused too much on cost and margins, missing the fact that the value of their offers to consumers had to exceed price and costs in order to hold onto customers.

Speaking at the same conference, Michael Liebreich, the founder and chairman of the advisory board of Bloomberg New Energy Finance, said that sectors such as carmakers are facing the same dramatic changes that have sunk the old business models of the big energy companies. Recent analysis indicates that the shift to electrification of cars looks set to come much faster than is currently built into the strategies of the major carmakers, Liebreich said. “That's a message I particularly wanted to deliver here today in Germany, which is so strong in the auto industry. This thing could pick up speed and start moving really, really fast,” he warned. Germany, the home to some of the world’s largest car makers such as Daimler, BMW or Volkswagen, has yet to come up with a strategy for the decarbonisation of the transport sector.

The head of think tank Agora Energiewende*, Patrick Graichen, said by 2030 most of the new cars had to be electric in order for the world to meet the climate targets agreed in Paris. He hoped that the carmakers would look at the fate of energy companies such as German utility RWE or US coal giant Peabody.

Andreas Knie, CEO at Berlin based think tank InnoZ warned that Germany by 2020 would use 50 percent of its primary energy for the transport sector. If a renewables solution weren’t found for this sector, no real Energiewende would be possible. “Germany is not a pioneer in the energy transition when you see the transport sector,” Knie said.

Energy state secretary Rainer Baake noted the “lively” debate about the prospects and different approaches for the transport sector. “There was consensus that there is a lot of untapped potential for higher efficiency and an increased use or renewable energy,” he said.

Renewables not a "luxury that only rich countries can afford"

Liebreich also highlighted figures that showed that more and more of the record levels in renewables investment went to developing countries, adding that it was a “myth” that renewables were a luxury only rich countries could afford.

Hendricks stressed that renewables had already lowered the country's carbon footprint. "Without renewables our climate balance would look pretty unhealthy," she said in remarks coming one day after official figures showed that Germany's CO2 emissions ticked up in 2015, mainly due to a rise in transport emissions. Hendricks voiced optimism that the wide cross-party support for climate policy would help to make the process for the government's long-term 2050 climate action plan a success. "I hope to have the climate action plan adopted by cabinet before the summer parliament recess," she said.

State secretary Thomas Silberhorn from the Ministry for Economic Cooperation and Development stressed that many developing countries could now leapfrog fossil-fuelled industrialisation. Silberhorn emphasized the role of Germany as a front-runner in knowledge and innovation. "Our strategy is to move forward a global energy transition, "Made with Germany", he said.