In the media: Energiewende can draw business to Germany

A majority of companies in the electrical industry is confident Germany will strengthen its international economic standing thanks to its capacity for innovation and its technological prowess, according to a survey from industry association VDE. Six out of ten companies believe the Energiewende, including smart grids and efficiency, offers the best potential for making Germany a good place to do business. Four out of ten companies said smart factories – dubbed industry 4.0 – offer the best potential.

Find a press release about the survey in German here.

“In an open cast mine of arguments”

Despite loud protests from unions and the coal industry, Germany’s Federal Minister for Economic Affairs and Energy, Sigmar Gabriel, appears to be resolute about introducing the proposed CO2 levy on old coal-fired power plants, according to an article in Süddeutsche Zeitung. The Social Democrat’s Ministry ardently defended the levy in written answers to criticism from members of the conservative CDU, writes Michael Bauchmüller. “The levy blends into a structural change which is underway in any case and will at most gravely affect old, inefficient and written-off plants,” Bauchmüller cites from the answers. The issue has become Gabriel’s most serious conflict yet, but he does not seem to harbour any doubt about the project, concludes Bauchmüller.

Read a CLEW article about the conflict about the levy here.

The Green Party is backing Energy Minister Gabriel’s plans for a climate levy on old coal-fired power stations and has accused the trade unions of propaganda “on the back of the employees” in the brown coal (lignite) industry, dpa writes. Trade union Verdi had warned that 100,000 jobs would be lost because of the climate levy, “despite the fact that only 20,000 people work in the brown coal sector,” the Greens leadership said. Minister Gabriel’s suggestion was a mere drop in the ocean and would not lead to an end of brown coal power generation, they said.

Berlin infographic-outlet Strom-Report has compiled figures on Germany’s wind power sector, showing that with 24,867 installed turbines with a capacity of 38,115 megawatts, the country is leading wind development in Europe. 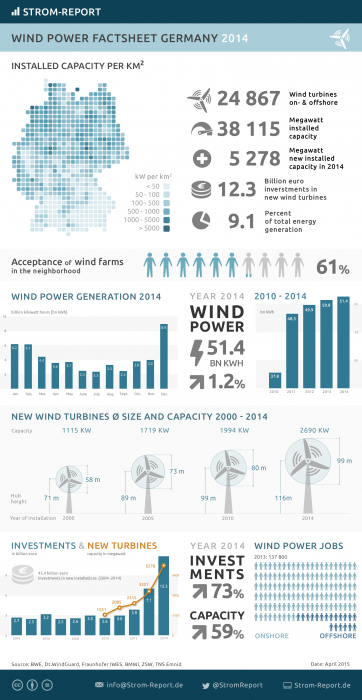 See the infographic and factsheet in English here.

Consultancy DIW Econ has published a study for the German Wind Energy Association (BWE), showing that the transition to renewable energies has a positive net-effect on employment in Germany. Citing the findings from researchers at GWS, Prognos and EWI (2014), the authors say that an average of 18,000 jobs are added every year because of the energy transformation. They compare these figures to the number of jobs in mineral oil and coking in Germany (18,982) and the job growth in the chemicals industry of an added 16,800  between 2008 and 2013.

See the study in German here.

Study on effect of climate change on national fragility

A new study entitled “A New Climate for Peace – Taking Action on Climate and Fragility Risks“ by consultancies Adelphi (Berlin), International Alert (London), Woodrow Wilson Center (Washington DC) and the EU Institute for Security Studies (Paris) will serve as a basis for the G7 foreign ministers' talks in Lübeck this week, the German Foreign Office said. “Climate change makes it more difficult to deal with urbanisation, environment degradation and population growth and it poses a growing challenge for peace and stability,” Germany’s Foreign Minister Frank-Walter Steinmeier said in Berlin. He said the study would be used as a basis to develop joint measures on these issues, which was particularly important with the UN climate conference in Paris in mind. The study will be published after the G7 event in Lübeck finishes on Wednesday, the Foreign Office said.