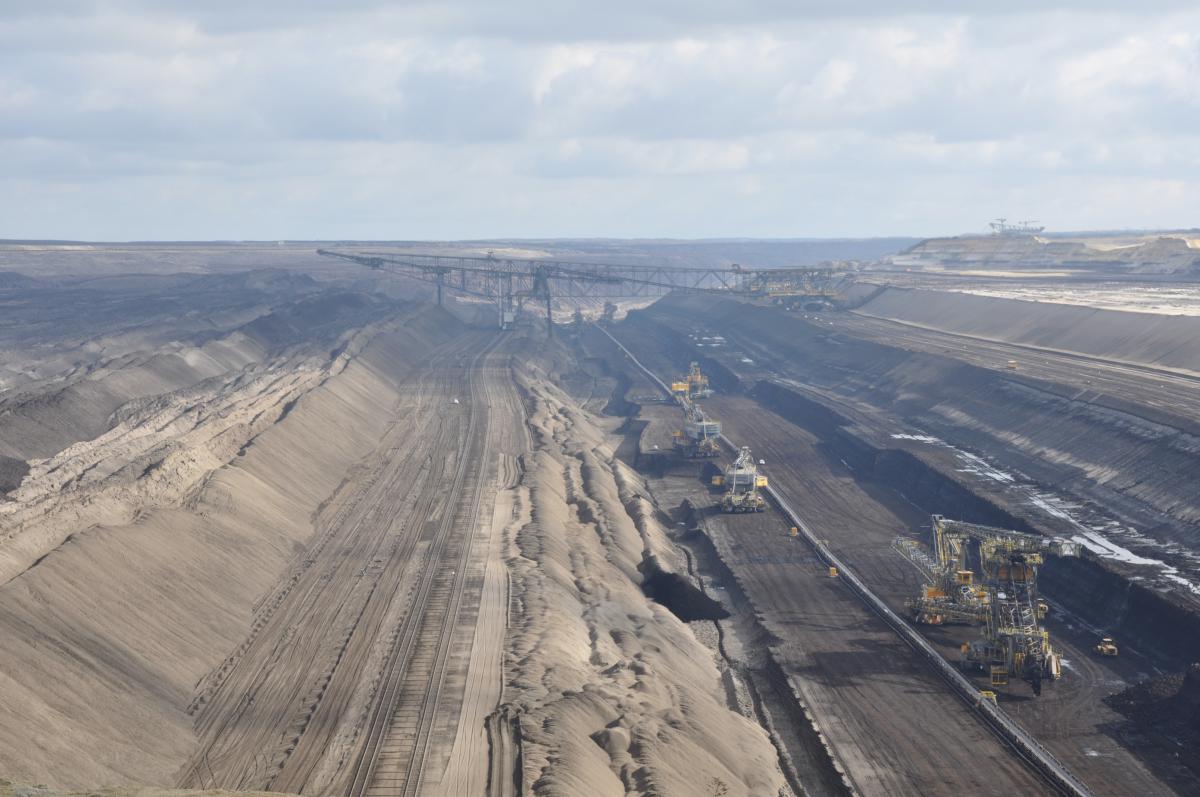 Open-cast mine of Welzow-Süd in Lusatia. Photo: Sören Amelang.
The protests against government proposals for a carbon emissions levy for older power plants are gaining momentum in Germany’s coal mining regions. Unions warn the plans put tens of thousands of jobs at risk because they will make lignite-fired power stations unprofitable, sounding the death knell for coal mining and risking the “social blackout of whole regions.” Local politicians insist coal mining must continue, underlining how deeply rooted the industry is in affected areas.

The German government plans to cut 22 million tonnes of CO2 emissions from the energy sector by demanding additional CO2 levies from older power plants in order to achieve the country's climate target of cutting emissions by 40 percent from 1990 levels by 2020. The proposals for this “national climate contribution”, outlined in a paper by the Ministry of Economic Affairs and Energy, have also met strong resistance from affected utilities.  A new study by Friends of the Earth insists the climate goals imply Germany will have to exit brown coal as early as possible, and that a phase-out is feasable by 2030.

Under the motto “time is running out”, thousands of miners and power plant employees protested against the levy in the Lusatia region on the German-Polish border, an area dominated by the coal industry and its open-cast mines. Similar protests were scheduled in other mining regions.

Mining Union IG BCE warned that government plans put the future of big utilities and the international reputation of the Energiewende at risk. Union head Michael Vassiliadis said the proposals amounted to the beginning of an exit from brown coal and would be a catastrophe for mining regions. “If there are further ruptures, political prohibition of certain technologies, and phase-out excesses, nobody will follow the German path.”

The mining regions' fears are politically delicate because two regional states at the forefront of the protests, Brandenburg near the capital Berlin - part of which belongs to Lusatia - and west German North Rhine Westphalia, are both run by premiers from energy minister Sigmar Gabriel’s Social Democratic Party (SPD). Brandenburg premier Dietmar Woidke called Gabriel’s proposals an "ideologically motivated blow to Germany’s most important domestic energy source."

Local MP Ulrich Freese, also an SPD member, warned that a realisation of the proposals would put most power plants in the region of Lusatia out of business overnight and Swedish operator Vattenfall would cut down on its mining operations accordingly. “I expect the government to adjust its paper to reality and stop anything that would spell the end of coal before the year 2050,” he was quoted as saying in the Tagesspiegel.

Lusatia is already on tenterhooks because Swedish operator Vattenfall wants to sell its German lignite operations to reduce its carbon footprint. Czech utility EPH wants to buy the mines and power plants - but only if it receives firm political assurances on how much lignite it will still be allowed to mine.

The region is saddled with high unemployment as a result of de-industrialisation following German unification, and struggling to reinvent itself. Lignite mining is still one of the area’s industrial backbones and one of its most important employers, providing 8,000 jobs paid well above the regional average.

The future of coal is an extremely divisive issue in Lusatia. For many locals, the prospect of a low-carbon energy future is very painful. Vattenfall’s logo is omnipresent in the region – on the extensive coal infrastructure dotting the landscape, but also because it heavily sponsors local culture and sports. Mining is so deeply rooted in the region’s history that it defines local identity – for many, a future without coal is unthinkable. Even to publicly consider a “Plan B” for the post-coal period is considered sacrilege in the region, local politicians told the Clean Energy Wire.

On the other hand, the industry threatens many local livelihoods as whole villages are slated to fall victim to open-cast mines, and the long-term environmental consequences on a local level are dire. To this date, around 90 villages have been lost to mining expansion in Lusatia alone.